The Porsche 918 Spyder is nothing less than a revolution when it comes to its advanced hybrid propulsion system or astonishing aerodynamic performance. Pushing out 887bhp of massive power is itself bound to make you get weak knees. Its V8 sports engine is combined with two electric drive motors, hence the hybrid. But equally are the manufacturing processes involved in creating this immaculately designed specialised sports car of the future. The manufacturing plant, which is spread across 4000 square metre, employees 100 selected people who assemble the vehicle by hand. 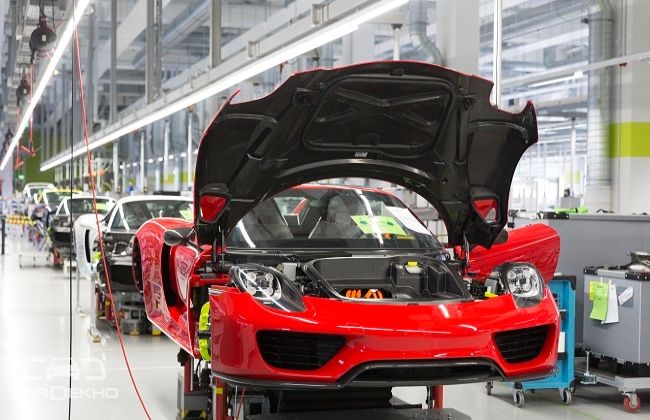 The manufacturing unit is located at the heart of Plant 2 in Stuttgart-Zuffenhausen, which happens to be the centre of Porsche's operations and the production site (Holy Grail) of the iconic 911 sports car for 50 years now. Porsche has already sold the proposed 918 units of the Porsche 918 Spyder in a quick span of a year. Michael Drolshagen was given the responsibility of designing and building a manufactory for the Porsche 918 Spyder as its intended Director of Production nearly 4 years ago.

Magic starts at the monocoque

The fact that the construction of every Porsche 918 Spyder starts with the two-seater monocoque is special in itself. The battery operated elevating trucks designed especially for this stage of the process allow the technician to raise and lower the component, as well as rotate it horizontally and vertically, making the technicians work much easier, particularly when it comes to routing the wiring harnesses.

Based on the Porsche philosophy of "one technician, one engine", the units, constructed in line with light-weight technology principles, develop each one of their contours as they pass through the eight stations. The exercise takes 20 hours to complete and by end, the 140 kilogram engines is the work of a single employee.

Two years later the manufacturing plant was set up in its central location at Plant 2 in Zuffenhausen. Focused and perfectly silent facility, Porsche specialists work at pioneering ergonomic workstations to create a high-end sports car. The room exudes an impression of lightness, and is dominated by coloured features in grey (floor), white (walls and ceilings) and acid green, the recurring colour combination that Porsche has settled for all vehicles featuring electric hybrid drive.

Predictably, everywhere and everything is neat and tidy. No cables lay loose over into the path ways between the workstations, as the aim from the outset was to rely exclusively on cordless tools for the construction of plug-in-hybrid sports cars. The Bluetooth-controlled cordless screwdrivers are virtually silent and offer technicians flexibility at the workstation, reducing the risk of damage to components. To add to precision, screwdrivers are synchronised in a database to ensure stored torque values are reliably complied and can be documented and re-checked any time.

Combining legacy with the future

Porsche has an uncompromising (almost scary) attitude to quality management. But then they have the never ending historic significance of the 911 which they cannot do without in all their products. Hence, it can be easily concluded that the plant offers an emotive connection with the origin of the 911 leg-end, Porsche's racing history and the very special Porsche DNA. However, even more important was the manufactory's ability, as a production location for a small-series supercar, to link up with the so-called series production "pearl chain". That allows a range of facilities as well as the comprehensive field testing expertise to be utilised during the final assembly process.

And then are the employees. Nearly 3,500 people work on vehicle assembly at the facility and nowhere else would it have been possible to rely on a pool of such highly qualified specialists from the development, vehicle equipment, body assembly, paint finishing, assembly and drive unit fields. Adding to diversity, women and men from around 14 countries were eventually assigned the coveted spots on the Spyder 918 production line. Ages of the teams range from as low as 21 to 56 years, with professional experience of between 6 and 40 years. All these members are from the 911 production line, with most of them having already worked on the production of motorsport cars or prototype production.

With all their expertise and passion, this varied team is what will guarantee that exactly 918 units of the Porsche 918 Spyder will have left the manufactory in the best possible quality standards. Enhancing the customer experience, it was of necessary to give the manufactory its own leather finishing department. Vehicle interior specialists stitch the leather around the sun visor in 40 minutes with a steady hand in 200 precise stitches and finally secure their work with a cross-over seam will definitely understand the level of quality required for a sports car to labelled "hand-made in Germany".

During the production process, the Porsche production staff use the Porsche her-ringbone model, although the structure in use is actually more like a one-sided bone for this purpose. Nevertheless, this principle offers the shortest paths between each point in the chain. In the case of the Spyder manufactory, this means that the pre-assembly area is positioned to the left of the main line and the corresponding parts are taken from there directly to the main line. The pre-assembly stations themselves are supplied from outside the manufactory via a conveyor system, which, in turn, is supplied with the appropriate parts from a separate store located one floor below.

At Porsche, absolute precision is the key to success on the production line, thus, tasks performed by the production staff are designed to highlight the extremely high standards applied to their work. The starting siren for the assembly of the first series production vehicle sounded on September 18, 2013, before which a team of 25 employees had already produced 25 prototypes and eight pilot vehicles. The L-shaped production line proved its worth during this introductory phase, "We have practically the entire value chain within this 4000-square-metre area" states Michael Drolshagen.