Tata Nano has covered a lot of roads since its entry in the Indian car market. Although it did not sell in the numbers that was expected of it, it did drive to some destinations, which was certainly not expected of it. It went on a round the country drive through the golden quadrilateral and it also managed to inspire an intrepid senior citizen who was well into his sixties to drive it on the world's highest motorable road i.e, Khardungla pass in Ladakh. But the fact remains that Tata Nano wasn't designed to venture into such extreme motoring adventures; it is off course a different matter that despite having been conceived with clear design mandate of an intra-city fuel efficient small car, TATA NANO proved that it is more than game for some extreme driving adventure as long as the adventure remains within the realms of logic and rationality. 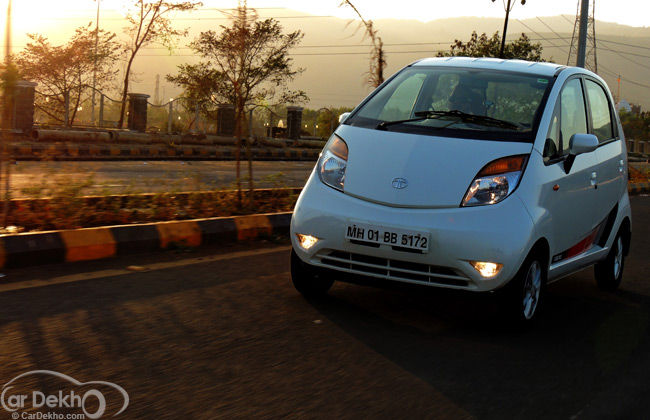 Tata's had introduced a refreshed version of Nano in the year 2012. Some much needed cosmetic and convenience features viz. left side door mirror, single strap for releasing rear seat latch (for folding the seat to access luggage compartment) was incorporated along with improved engine which is slightly more powerful and more fuel efficient too. Anti-roll bar at the front end was provided for improved handling. A few months back, Special Edition Nano was introduced with additional features viz., twin glove-boxes (one of which is lockable), a very good audio system with four speakers and alloy wheels.

Tata's may have named this car "Nano" but there is nothing small as far as interior space is concerned. High roofline and maximum utilization of the wheelbase for passenger space by keeping the overhangs to the minimum and installing the engine/transaxle behind the rear seat (under the luggage compartment) has liberated copious amount of interior space. The first thing which may strike someone getting acquainted with Tata Nano for the first time would be, apart from the cute look and expansive interior, the high seating position. High seating (High H-Point) makes long commutes less cruel for the lower back. As it is, a significant percentage of office goers in big cities suffer from back problems. It is understandable, as sedentary lifestyle combined with lack of exercise is a major issue among office goers in mega cities - perhaps exacerbated by lack of time too, which again is a corollary of long commutes. Tata Nano may be the smallest car in India but it may not be the smallest one in terms of space available for its occupants. A very good example of extreme packaging efficiency, the designers have provided more than enough interior space. High seating and easy ingress / egress has resulted in a car which is user friendly and comfortable, especially for intra-city use where short distance drive and frequent ingress / egress is the norm Equipped with a 624cc twin cylinder all aluminium gasoline engine developing about 37bhp and it comes mated to a four-speed manual transmission, this car was always expected to be a paragon of fuel efficiency.

The small and efficient powerplant is one of the many factors makes it highly economical. Optimized gear ratios, low weight and aerodynamic shape are other important factors. Nano seems to have been designed in a holistic manner and has managed to hit the sweet spot where it is not only exceptionally fuel efficient, nothing detracts from its excellent drivability and comfort. The inherent over steering tendency of this rear engine rear wheel drive car has been countered by way of ingenuous solution of having the front tyres narrower than the rear ones. This simple engineering solution has also managed to reduce the steering effort required as the present generation Nanos do not come equipped with power steering. Low mounted engine and powertrain has resulted in centralization of mass quite low in the car and this provided  the designers liberty to go full steam ahead as far as tallboy design with high ground clearance and high seating was concerned.

Well thought out gear ratios have meant that even when fully loaded, this car is not a slouch. Throttle response is perky and the car holds its own in the megacity traffic in all conditions - be it bumper to bumper traffic at the notorious Saki-Naka or deliciously fast paced traffic on the beautiful stretch of tarmac in Navi-Mumbai -Palm Beach Road which is the pride of Navi Mumbai.

This is not to say that there are no glitches. For one, clutch action is sharp and allied with fuel mapping aimed at frugal fuel consumption it takes very little to stall the engine, especially in bumper to bumper traffic. It does take time to get used to the clutch action in Nano, especially in stop and go bumper-to-bumper traffic.  Secondly, although one side effect of having narrow front tyres is reduced steering effort, lack of power steering means that the astounding maneuverability of this car is not always fully exploitable in slow speed situations.  Finally, provision of one more gear ratio, apart from reducing the gaps between the ratios could have also allowed a slightly shorter first gear and a slightly taller final ratio and that could have taken care of the engine stalling tendency at one end and may have provided a higher top speed, smoother high speed cruising ability and better highway fuel efficiency at the other end of the spectrum.

The new Nano has upgraded interior but some rough edges from the perspective of functionality have remained unaddressed. The top end variant comes fitted with power window winders for the front doors and the switches have been centrally installed on a console which is placed ahead of the gear shift lever. No doubt, centrally located switches for the power windows are a necessity dictated by the need to control cost but the execution could certainly have been better in the interests of ergonomics. As it is, this apparently hastily designed console has been utilized not only for power window switches but space for a couple of glass / cans / drinks holders is also provided. This console is located so low that accessing the power window switch is a chore requiring the agility and limberness of a gymnast. As far as the reaching the glass / cans / drinks holders is concerned, it becomes an exercise in futility, especially if one has kept the seats reasonably moved. Simply redesigning the console and ensuring that it is placed sufficiently high would solve this problem and may also provide for some extra storage space in the central console at minimal additional cost.

Having put the Nano through its paces in the urban jungle of the megacity that Mumbai is, it is clear that Nano has what it takes to be a cult city car but somehow has not been able to fulfill its potential. One week of daily commute (about 75 KM daily) from the expansive suburb of Kharghar (Navi Mumbai) to the densely populated suburb of Andheri (western suburb of Mumbai) through some of the most scenic and fast roads as well as some of the most congested and slow trafficked roads (Ghatkopar, LBS road, Asalpha, Saki Naka), this car has demonstrated its strengths and versatility.

It is easy to drive, not only because of the compact size but also due to excellent driving posture and responsive engine. It is comfortable as occupants have more than enough space to stretch their limbs while their posteriors rest on cushy and high seats. Ride is quite pliant and takes care of road surface irregularities, speed-breakers and pot holes with admirable composure. Air conditioning is another gem, it is simply superb; cools down the interior in no time with barely any need to even increase the blower speed. A weekend drive out of the city (to Karjat) further accentuated the versatility part of the equation that Nano had effectively demonstrated during the week day commutes. It could easily hit the 100km/hr mark on the short stretch of Expressway (Mumbai - Pune Expressway) that it got the opportunity to sprint on.

While cruising at speed range of 80-100km/hr, this car feels steady and stable and its small but efficient engine feels unstressed. Speeding in excess of 100km/hr is certainly possible but at around 105km/hr, engine management intervenes and cuts the fuel supply to limit the top speed. Come to think of the price at which Nano is being sold, if analyzed, it immediately strikes that this is one important aspect which cannot be ignored. It is really a triumph of frugal engineering and efficient industrial production that a product like Nano is available at such a fantastically low price. No doubt, TATA’s may be earning a wafer thin margin but still the price point at which it is being sold is simply astounding.

After having experienced the many charms of this cute little car, it is time to bid it good bye and already separation anxiety has taken hold. This car slowly but surely switches on its charms in a special way and makes the driver addicted to it. Excellent drivability, pliant ride and cute looks do contribute to the charm offensive of this car but even the most rational person may find it difficult to escape its charms when Nano brings on its frugal nature to the fore. Fuel efficiency figures of about 16km/l in congested bumper to bumper traffic during the daily commute and over 22km/l on the out of city drive, with Air Conditioning always turned on, are figures which have the potential to bring the smile back on the face in the era of ever increasing fuel cost.