Vitara Brezza MY SUV, MY PRIDE!

Vitara Brezza MY SUV, MY PRIDE!

Vitara Brezza now holds the crown of Indian Car of the Year and is the new COTY in the town, earlier it was Creta. It is the most talked about car in the industry because of the value it offers in its segment which makes it one of the promising bet. Vitara Brezza somehow resembles to Range Rover Evoque, which itself is a big compliment for this car. Buying Decision: For me, it was not the Love at first sight for Brezza but was the difficult task to finalize the car suitable for my requirements, which is the concern of every buyer nowadays because of the overlapping and emerging segments in the industry. But I was pretty clear to be part of the Urban SUV segment club. But I knew that it is not going to be easy selection as this new Urban SUV Segment is already dominated by the Renault Duster. The Segment Creator, Ford Ecosport ? The Segment Successor, Hyundai Creta ? The Segment Ruler and other players Like Mahindra TUV300 and Nissan Terrano were also part of this race. After the�test drive of Vitara Brezza, Ford Ecosport and Hyundai Creta, the things were getting more confusing. Hyundai Creta was somehow out of the competition for me because of the higher price tag comparing the other two choices. Ford Ecosport was leading for its peppy engine performance powered by a bigger engine of 1498cc compared to 1248 cc diesel engine of Vitara Brezza, which was one of the important criteria for my purchase. But the Vitara Brezza wins the race because of its solid instance of SUV, which was somehow missing in Ecosport because of its more compact design. I will give full marks to Maruti designers for designing this sub 4-meter compact SUV. This car is perfectly designed from the every angle and it looks aggressive & wider which gives it a solid road presence and true sense of owning a SUV. The presence of Projector headlamps, daytime running lights, 16 inch alloy wheels, sporty spoiler also helped me in finalizing my First SUV, MY PRIDE! Experience: I bought Brezza in November 2016 first week, so it?s more than 2 months and 6000 kilometers driven ownership. The good point is on this New Year I have travelled almost 3500 kilometers in this vehicle with my Mother and brother (Although this trip turned into a pilgrimage one i.e. Ujjain-Panchwati-Tapovan-Shirdi-Shani Shingnapur-Trimbakeshwar except one stay in Sula Vineyards) . So, comfort can never be an issue with Brezza if my Mother can travel continuously for around 22 hours straight from Nashik to Delhi. During this long Journey I have driven the vehicle on highways, Ghats sections, Narrow roads and rough Terrains near Deolali Camp in Nashik. And believe me I got the required response from this new ?ICOTY? (I personally like this term after seeing it on the rear of Creta for long time). Summary: If I have to rate this car on the scale of 5 on various parameters, then Exterior: 5 Stars (For its well proofed design or I will say craftsmanship to design such a solid SUV instance for sub-4 meter vehicle) Interior: 4.5 Stars (Again good job done in carving the space front, rear and boot. Full marks to its instrument cluster with mood lights, black interiors with the combination of matte and Gloss. Maruti left the scope in terms of utility spaces and the interior quality could be better than this) Features: 3.5 Stars (This I want to give a strong message to Maruti for missing out the hygiene features in their variants, I have ZDI variant of Brezza which lacks the power foldable ORVM?s and Turn indicators on ORVM?s which I can expect if I am spending 10 Lakh. Maruti need to understand that these features are not luxury now; they are hygiene features in this price bracket. This type of feature allocation in the variants only gives you less satisfied customers!) Performance: 4 Stars (Vitara Brezza is also powered by 1.3-litre, 4 cylinder engine producing 90PS of power and 200Nm of torque. The engine is quite responsive with proper NVH levels. Maruti claims the fuel economy of 24kmpl, but I am yet to achieve something close to it, although the real time Fuel average indicator keeps you in the ideal driving combinations of rpm and speed for better FE. The deduction of 1 star is because of the lack of engine options offered by Maruti when competition is offering configuration like 1.4-litre and 1.6-litre in the same model.) Safety: 4.5 Stars (It comes with ABS with EBD and Dual Airbags, Anti-theft security system, Pre-tensioner and load limiter seat belts and reverse parking sensor does the justification. Again Maruti loses some marks of not offering hygiene features like Projector Headlamps and fog lamps in the mid variants) Conclusion: Maruti Suzuki Vitara Brezza (Now, ICOTY) makes a very strong case for your hard earned money. It offers proper value for your money in terms of its SUV look which is a desire of many Indians now. You can buy the fully loaded Brezza and still can save the lakhs of rupees (in terms of competition products) and invest them in good Mutual Funds which will help you in buying your next dream machine! P.S: Images captured in Sula Vineyard! DRIVE SAFE!!

I am waiting for the petrol variant.

when is the petrol variant of brezza being launched ? 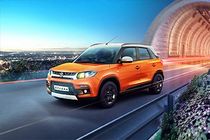