Is Tata’s new bird capable of ruffling some feathers when placed in the same ring as the Toyota Glanza? 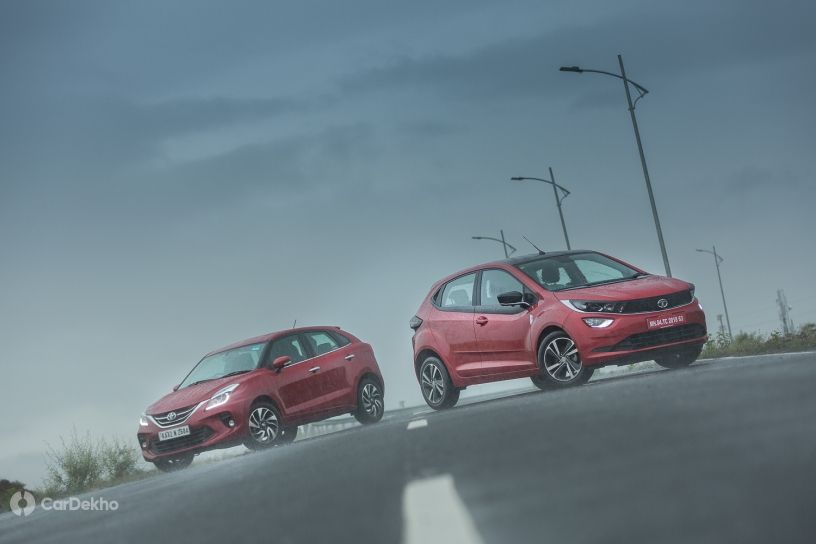 Just a year back, if you were searching for a premium family hatchback then chances are that your eyes would have been fixated on a few established options. These would include the Maruti Baleno, Hyundai Elite i20, Honda Jazz or even the Toyota Glanza. However, the stakes have been raised by the entry of Tata’s Altroz. So can the new Tata be a better family car when compared to the Toyota Glanza?

Let’s kick things off with the new entrant, the Tata Altroz, which looks quite striking. The onlookers will also corroborate this fact. The blacked-out honeycomb mesh grille and sharp side-swept halogen projector headlamps with LED daytime running lamps lend it a sporty yet purposeful face. Move on to the sides and you are greeted by muscular haunches complementing the 16-inch machine-finished alloy wheels. Yes, you can’t see the rear door handle in its conventional spot because that has been tucked away in a kink beside the window. The rear-end is dominated by piano black finish but the tail lamps, just like the headlamps, miss out on LEDs. That said, the tasteful use of chrome and glossy black around the Altroz gives it oodles of presence.

The Glanza’s design is quite cohesive and recognizable as you’ve probably seen a lot of it on the roads, albeit in the Maruti guise. It uses chrome for its triple-slat front grille and is flanked by triangular LED headlamps which come with light guides. The Glanza’s side profile gives a miss to the Altroz-like cuts and slashes, bearing a simple straightforward design instead. Its 16-inch machine-cut alloy wheels look equally striking if not better than the Altroz. At the rear, the Glanza gets a lip spoiler with chrome strips on the boot lid and bumper. It’s rounded off by the squarish LED tail lamps, nameplate and variant badging on the boot lid. The Toyota, here, looks a bit dated in comparison to the new bird.

It’s a similar story on the inside as well: the Tata offers a more premium cabin experience. Its two-tone dashboard is made in layers and utilises a variety of materials. There’s satin silver and grey finish for the central panels, chrome touches for the automatic climate control and infotainment system knobs, with a decent quality plastic rounding off the remaining regions. The flat-bottomed steering wheel is chunky and well-contoured and features audio and cruise control buttons.

The Glanza’s dashboard, on the other hand, uses dollops of hard black plastic which feels built to a cost. Only saving grace is the silver accents for the central console, layered majorly around the climate controls. The subtle chrome rings around the AC vents and the vanilla multi-functioned steering wheel do little to uplift the cabin ambience. The Glanza’s all-black colour scheme makes it feel a tad compact but the reality is far from it as our measurement numbers below will reveal.

The Altroz’ 7-inch semi-digital instrument cluster is quite detailed (relays turn-by-turn navigation and media). As for its floating 7-inch touchscreen unit, it is easy to use on the move and offers acceptably quick response but the graphics still leave a little to be desired for. The Glanza retains a similarly-sized but familiar touchscreen that we’ve seen in the Baleno as well. Just like the Tata, it gets Apple CarPlay and Android Auto compatibility.

Ingress and egress is a slightly better affair in the Altroz courtesy of its 90-degree opening doors. When it comes to front seat space, the Glanza offers better headroom, legroom as well as knee room. But the Altroz pulls a couple of points in its favour by offering better cabin width and a smidge higher seatback. Although, both the cars will be able to accommodate six-footers easily. The Altroz’s seats are slightly firm but offer good bolstering and will be a lot more supportive on longer journeys than the softly cushioned Glanza’s.

That said, the driver gets only tilt adjust for the steering wheel and the thick A-pillar is also bound to affect the visibility, especially for shorter people behind the wheel. However, view out the Glanza is quite clear and finding a natural driving position will be easier as it also gets telescopic steering adjust. That said, the soft seats and side bolstering will render it a bit tiresome on highway sojourns. Both the cars get an armrest with storage function but the Altroz’s unit offers a sliding function, thereby offering better comfort.

Switching to the rear will also reveal that the Altroz offers better support and firmer seat cushioning than the Glanza. Yes, the former has a slightly more upright backrest angle but it feels better when you spend longer hours in the saddle. The measurements reveal that the Glanza has better numbers and expectedly, it should offer better rear cabin experience, right? Wrong.

That’s because the Altroz offers rear AC vents coupled with a foldable armrest and a 12V socket. Its usable headroom is better and the floor hump is nearly flat thanks to the ALFA architecture which makes seating three abreast a better experience than the Glanza. However, it doesn’t take away from the fact that the Glanza offers better under-thigh support and a clearer view outside due to its conventional window line, unlike the Altroz which gets its rear door handle integrated besides the window. Seating four six-footers one behind another is possible in both the offerings but their head will brush against the roof in the Glanza because of its design quirk. Both cars offer rear adjustable headrests but one for the middle passenger has been omitted.  If you are eyeing a better rear row experience, the Altroz delivers despite a deficit in numbers.

Where in-cabin storage is concerned, both the cars are clearly matched. Both share bottle holders in all four doors, cubby holes and cup holders but the Altroz gets a voluminous 15-litre cooled glovebox, umbrella holder in the doors and neat little hook in the front passenger’s footwell.

The boot space is quite closely matched as the Altroz offers 345 litres while the Glanza puts down 339 litres. Your family’s weekend load can fit in both the cars but it will be a little easier to fit in the Altroz thanks to its lower loading lip and wider opening. The Glanza’s rear parcel tray is a bit weird and makes loading a slightly trickier affair too. But its trump card here is the 60:40 split function which will make it easier to transport bigger luggage if the need arises.

There are a lot of commons between the two hatchbacks when it comes to features. Apart from the 7-inch touchscreen units, there is automatic climate control, automatic headlamps, rain-sensing wipers, auto-folding outside rearview mirrors, push button start/stop, front 12V socket and USB ports.

If your rides are majorly within urban limits then there’s nothing we can fault in the Glanza. The smaller imperfections and speed breakers go by unnoticed while the bigger potholes do feel noticeable but never uncomfortable. But the suspension is a bit audible when you’re driving on unladen roads for long. The Altroz’ suspension, though, is a tad stiffer and mild undulations do filter in the cabin but never become bothersome. It easily sails over big tabletop speed breakers without breaking a sweat, keeping rear passengers composed. The Glanza (170mm) has a 5mm advantage in ground clearance but on bad roads, both the cars are equally capable.

The distinction becomes clearer on the highways where the Altroz feel a little more composed. The body roll inside the Tata is also well-controlled and coupled with the better NVH levels, the Altroz will be our pick for spending longer journeys. The Altroz might come out as a better all-rounder but if city usage is your concern, then the Glanza won’t disappoint you either.

Since the cars you see in the images feature a petrol (Glanza) and a diesel (Altroz) engine we haven’t directly compared them here but if you spend more hours in the driver’s seat, read the Tata Altroz’ drive experience here. For Toyota Glanza, head here.

The Toyota Glanza also has a clear advantage with its CVT and that’s a glaring miss in the Altroz at the moment. There’s an automatic Altroz in the works but that’s still some months away.

Things start tilting in the Altroz’ favour in the multitudes of practicality tests where it shows a clear domination in terms of space, comfort and features. It’s easier to get into, sits four and even five in more comfort, and even though the Glanza has a lot of space, the layout of the Altroz cabin makes better use of the real estate. It even gets a 5-star rating in the global NCAP crash tests. And if your heart is set on one, it has a lower starting price of Rs 5.44 lakh in comparison to the Glanza’s entry price of Rs 7.01 lakh (both ex-showroom Delhi). But you need to keep in mind that at this entry-level price the Altroz is quite bare bones while the Glanza’s G variant offers quite a lot in terms of standard equipment.

With these points in sight, the Tata Altroz does come across as a better proposition than the Toyota Glanza and takes the cake in this contest.