Skoda’s Octavia had been one of the most famous diesel sedans in the country, and people even liked the Octavia vRS— which was introduced later on. The Octavia vRS was the first petrol turbo engine in the Indian car market and it made a big impact on the car enthusiasts. 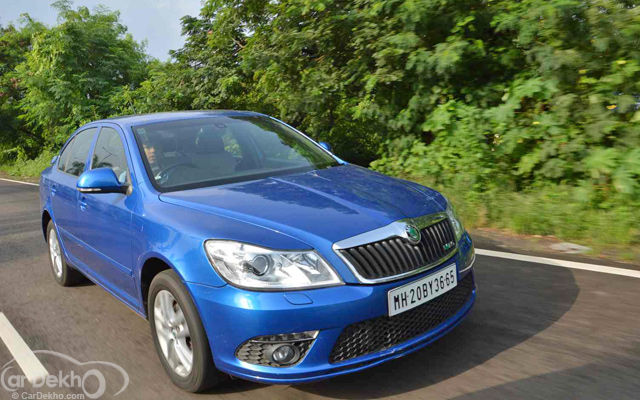 After discontinuing the vRS, Skoda wanted to continue with the same legacy, and so it carried forward the same 1.8-litre turbo engine on the new Skoda Laura.

The next step, we had expected from Czech auto manufacturer was to introduce the Laura vRS, the 200bhp 2.0-litre petrol turbo that Skoda had been flaunting.

Apparently, a change of thought made Skoda get the vRS with the same 1.8-litre mill. So, we get our hands on the vRS and see if it is really worth to spend that extra buck for the vRS.

The Laura vRS retains the same design like the Laura except for those extra-added bodykit. It gets a new front bumper, which has round fog lamps and also gets the daytime running LED lamps. The vRS also gets side skirts and a large rear spoiler to give it a sporty look. Rest of the kit remains identical.

The vRS comes in bright and jaunty colours, which further adds to the sporty character— yellow, blue and black.

The interiors of the Laura vRS appeal to those young at heart than a regular Laura, which is build for executives. There is a different steering wheel, a new set of seat covers, and more bucket-like seats.

There are metal pedals and also you have a touchscreen music system as well. There is even a sunroof if you wish to enjoy the weather on a pleasant day. To our dismay, the vRS doesn’t even get climate control air-conditioning.

There is no change in space or seating. However, the new front seats are a bit uncomfortable over long journeys and the Laura seats are better in this case. These body-hugging seats somehow lack the support for your back. But are perfect to sit and hold you whilst you drift your vRS. The boot is the same massive hatchback opening.

Not much has changed on the mechanicals bit on the vRS. The hood houses the same 1.8-litre petrol turbo mill that churns out 160bhp of power and 250Nm of torque.

The turbo lag is fairly prominent, as the engine struggles to pull until the turbocharger kicks in. But once the turbo spools, you have a gush of boundless power under your right foot. Plant your foot and objects from the windshield will be sucked back. You can overtake in city and on highways in a wink of an eyelid.

The six-speed manual transmission has seamless and short shifts. However, it is the long travel of the clutch that spoils the joy. This makes it difficult and tiring to drive in bumper-to-bumper city traffic. The ride and handling are very much similar to the Laura. It is fairly composed and smooth at low and high speeds and even the handling is agile. We have always loved the handling characteristics of a Skoda and the Laura vRS is definitely one amongst them.

You can burn some rubber on the Laura vRS and be the quickest off from the red lights. You can do the same thing, even when you have the Laura TSi. So, if you like the styling of the Laura vRS, then go for it, else the regular Laura TSi pretty much does the job.

You could also customise the car as per your taste, with the remaining money.