Renault Kiger CVT vs AMT: Which Automatic To Buy?

Renault is offering two petrol-powered automatic options with the Kiger. Turbo-CVT or naturally aspirated AMT, which one suits you better? 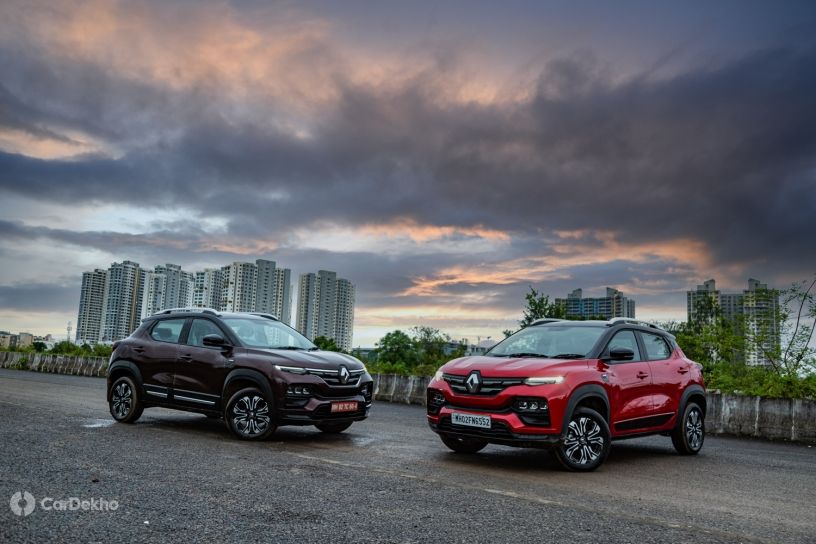 The Renault Kiger might not be available with a diesel engine but is still offering the buyers a choice between two three-cylinder petrol engine options. The more economical option is a 72PS 1.0-litre naturally aspirated engine and the more premium and performance-oriented option is the turbocharged 100PS 1.0-litre engine. Both are on offer with a manual and an automatic option. The difference is in the automatics that are being offered. The economical engine gets the city-oriented AMT and the turbocharged engine gets a smooth CVT. Check out the full specification in the table below.

Since the only difference between these two are the powertrains, we set out to see which automatic makes more sense for you.

What are we waiting for?

Before we start, quite literally, we have to talk about the startup of the two cars. While both get a push-button start/stop feature with a smart key, the CVT works as intended. Press the starter buttons and the car comes to life. However, on the AMT, there is a 4-5 second delay between pressing the start button and the ignition happening, which feels just too long. Every time. And this wait for the engine to start after giving the command begins to get more and more annoying as you spend time with it. Also, this is often accommodated with a ‘what are we waiting for’ look from your passengers.

Let's talk about the AMT first. This seems to be the same unit as the Triber AMT as they are very similar in nature. This one too likes to be driven very calmly. The gear shifts are slow and there is a big lag between the power getting cut off, and then resuming again. However, if you are just cruising around at a leisurely pace, you won't feel this much. In fact, they won't even bother you if you don't demand any rapid acceleration.

The issue starts to arise when you have a clear patch of road in front and you would like to go a little quicker. Not fast, just quicker. This is where the AMT’s shifts start to feel lazy and because it breaks the momentum, they are accommodated with a headnod - which is something that other AMTs in the market have managed to eliminate with faster shift times. And if you would like to go for gaps or make quick overtakes, the engine still offers you a good punch and acceleration but the shifts won't allow you to make that move. Luckily, there is a manual mode that allows you to take over. Shift it in a lower gear before you start the move and then it just might work.

This is exactly where the CVT shines. Right from the pickup, the turbo-petrol engine offers you effortless power and because the CVT offers linear acceleration, there are no jerks or loss of momentum. And this particular CVT is well-tuned too and won't leave you waiting for the drive to match the revs. Be it calmly commuting, going for gaps or overtakes, the turbo-petrol CVT does it all, effortlessly.

On the highways, the nature of both cars is absolutely the same. The AMT does take a lot of effort to go for overtakes or quick gear changes, and a lot of that feedback also comes into the cabin as engine noise. The CVT, on the other hand, makes it smooth and easy for overtakes, be it quick or planned. But if you are just sitting at 100kmph, the AMT too will not give you reasons to complain. And, will also offer better efficiency.

Both cars offer the same drive modes, namely Eco, Normal and Sport. Eco really dulls down the throttle and is best left for when you are absolutely just sitting in traffic. Normal mode is the one you will be using 90 per cent of the time as it offers power on tap while still up-shifting in an economical manner. Sport mode just likes to hold revs high and makes the throttle very sensitive. Good when you really want to hustle the Kiger around.

This 1.0 litre naturally aspirated engine is the same as the Triber but tuned to make more power and torque. And this shows in its nature as well. On the highway where it doesn't have to shift much, it sits comfortably at 100kmph and cruises. However, city or highway, it works really hard (evident from the noise and vibrations in the cabin) every time you demand acceleration. Also, it only upshifts when you reach a certain rpm in every gear. If, because of traffic, you are sitting just under the shift point, it continues to pull in the same gear making it less efficient. And if you drive in the normal mode, expect this figure to drop down further.

CVT, even in the Eco mode, feels effortless in driving. Even if you switch to Normal, it behaves calmly and will only make the engine work when you want rapid acceleration. The extra power of the turbo-petrol helps it worry the engine less, resulting in similar efficiency as the AMT and a quieter in-cabin experience.

What do the numbers say?

The power and torque deficit do look significant on paper. But how much of this would translate into the real world? To find out, we strapped on our VBox -- the satellite-linked time measuring apparatus -- to the cars and took them for a performance run. Have a look at the results below.

Clearly, there is no comparison between the two. In fact, if we were to hide the names, you wouldn't think they belonged to the same segment, let alone the same car. And these numbers are closely representative of what they feel like to drive as well. While the AMT’s engine has decent punch, it's the slowpoke transmission holding it back. In fact, we even recorded a shift time of over a second! The CVT, on the other hand, has to be among the better CVTs we have seen across segments.

Which automatic should you pick?

No matter what your needs are, the CVT transmission here is definitely better. Be it city or highway, commuting or hustling, it shines in the way it delivers smooth acceleration and is efficient as well. And not just in this comparison but even individually as well, this CVT can hold its own in a pool of other automatics in the segment.

AMT transmissions are the ideal budget automatics especially with the progress made in recent times in cars like the Swift and the Grand i10 Nios. However, the Kiger’s AMT is just too slow. And while it does offer an acceptable calm commuting experience, that remains its only trick. Demand anything else from it and the AMT starts to feel outside its comfort zone. While this is still acceptable in cars like the Kwid or the Triber - which are squarely aimed at day-to-day commuters, in the Kiger it feels out of place. It neither matches the poke from the engine nor the idea of an all-rounder sub-compact SUV.

If you can spare the extra cash, or even need to stretch a bit, going for the turbo-petrol CVT is highly recommended.

Got mine yesterday , so disappointing, returning it tommorow, the AMT sucks, waited almost 3 months for it.No one told me about the lagging, feels as if someone is stepping on the breaks the whole time

Got mine yesterday , so disappointing, returning it tommorow, the AMT sucks, waited almost 3 months for it.No one told me about the lagging, feels as if someone is stepping on the breaks the whole time