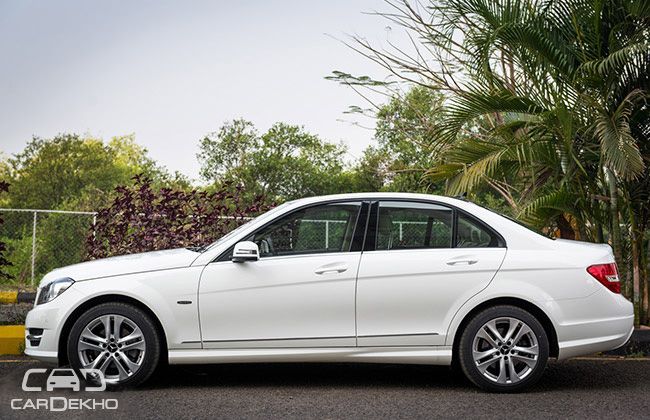 The C-Class, E-Class and the S-Class form about 60% of Mercedes-Benz India’s sales in India. The C-Class is the entry-level product and boosts the sales numbers. Few years ago, the C-Class was criticized for looking dul, boring and some even called it the old man’s car. The facelift however, changed the scenario and it became the favourite amongst the three German sedans. To continue with the moment, Mercedes-Benz has been introducing several limited editions of the C-Class. The Grand Edition C is the latest one.

There aren’t too many changes on the Grand Edition C, when you compare it to the existing C-Class. It of course sports the Grand Edition badge, but that’s the biggest differentiator.  There is also an AMG body styling with front and rear apron and side sill panels and 17-inch 5-twin-spoke light alloy wheels with black AMG hubcaps. The logo on the alloys have also been changed to AMG style, to add more sportiness to the styling.

It also gets the Intelligent Light System with bi-xenon headlamps with cornering light function, adaptive high beam assist, daytime running LEDs and headlight cleaning system. The front grille is Avantgarde and there is the panoramic sunroof too. This feature was available only in the C250 and now the Grand Edition also gets it.  Apart from this, rest of the kit remains unchanged.

Everything else remains the same, as there are no other changes on the inside of the Grand Edition C. The space and other features of the C-Class remain the same as this only a limited edition vehicle. The beige however makes the cabin feel a lot roomier than the conventional black or grey interiors.

Mercedes-Benz has also enhanced the telematics and multimedia centre of the C-Class GRAND EDITION with features such as an 11.4cm multifunctional colour display in the instrument cluster. Navigation with latest maps now features as standard in C-Class GRAND EDITION. But you cannot access navigation by using the navigation controls on the COMAND. Weird? Yes, it is as you need to try several buttons on the C-Class to understand which combination is the password to use maps.

The Grand Edition C comes with the diesel engine C220 CDI only. This engine comes mated to a self-shifting 7G-TRONIC transmission. The Mercedes-Benz Edition C comes only in C220 CDI engine and only 500 of these will be made. This is a 2.2-litre Diesel engine that produces 170bhp of power and has the same engine block like the C250 CDI, which was one long-termer vehicle. To be fare, this engine has enough grunt for the C-Class body. The C250 is definitely more powerful but it is more than what is required. The NVH levels of this engine are fairly low as it isn't very loud except on cold starts. Once the engine warms up, the diesel clatter reduces. The power produced by the C220 is good for city and highway driving. The response also form the engine is good, though it can’t match the C250’s 204bhp of power. The C220 CDI is one of the largest selling Mercedes-Benz engines in the C-Class and this is one reason why the German manufacturer has opted for this engine for its Grand Edition C.

The shifts on the 7G-TRONIC are a bit lazy when you need instant power rush but otherwise it is good enough. The shifts on this box are smooth and the transition from one gear to another cannot be noticed if you are sitting in the passenger seat. One thing that is missed sorely on this Grand Edition C are the paddle shifts, just like on previous editions. For the pricing the car is coming for, we believe this would have been a great feature to have, as even the cheaper C250 CDI gets it. This engine is bit more efficient than the C250 and can return up to 11-12km/l when driven with a light foot even in city.

The Grand Edition C doesn't get suspension adjustment like the Performance Edition, which had the option to stiffen the suspension. We expected this variant to get this as it has been badged with the Grand title. If you compare this to the regular C-Class there is no difference in the driving dynamics of this vehicle. The steering wheel is extremely light making it convenient to drive in city and even on long journeys. The ride is a bit stiff thanks to the 17-inch alloy wheels that come on the Grand Edition C.

The handling of the C-Class has been good and this is no different. It retains the same good handling, and you can even have some fun as the tail steps out a bit when pushed hard around corners. The response time of the ESP is quick, which means it corrects very quickly if you have made a mistake. The C-Class can do wheel spin if revved hard, as there is a lot of torque generated. Bad and bumpy roads aren't much of a joy as the low profile of the tyre means lesser rubber to absorb the bumps. The ride is supple on smooth roads be at low or high speeds. The 16-inch alloys are much better suited for Indian road conditions.

The C-Class is a great sedan to pick, but to buy this edition at this extra cost? We doubt will be a good decision. Rather procure the existing C220 CDI Avantgarde, as the cost is a bit too steep for this Edition and the features on offer aren’t very exciting. If you can still, then buy the C250 CDI.