Published On Sep 27, 2014 By Abhishek for Mercedes-Benz GLA Class

You have car brands and then you have the really popular car brands. Mercedes-Benz has always been one of the most popular car manufacturer's in the world and in India along with being popular it has also been an extremely aspirational brand symbolising success and fame. Now all these popular brands have one or more "Heroes" in their line-up which are responsible for making the brand a popular one. Maruti had the 800/Alto, Honda has the City, Toyota has the Innova and so on. But as you go higher in the segments you find that it is not one particular model that leads the brand, rather its the legacy and heritage that ropes in the consumers. As a result of which one will always find premium manufacturers taking you back to their roots and showing you how they have always achieved distinction through the years and how the current consumer is getting the best of what the brand has accumulated over the decades. Times though, are changing. With premium manufacturers now trying to percolate into the lower segments, it will require more than just legacy and heritage to rack up those numbers that the lower segments demand and that is where the ‘Hero' of the brand comes into play. 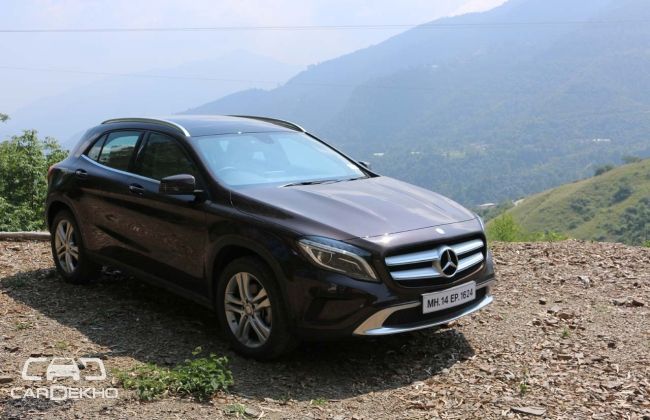 Mercedes-Benz announced its intention to make more affordable front-wheel drive cars a while back with their new MFA platform and the new A-Class and the B-class were the first to be spawned on the basis of the new platform however, it was the GLA-Class that had captured the most attention thanks to India being an SUV biased nation. After months of speculation about its arrival and in the midst of Mercedes' model offensive, the compact SUV is finally here. We took it around some brilliant roads in the hilly regions of Shimla to find out if this car really has what it takes to be the ‘Hero' of the brand.

Now the looks of a car are extremely important in the Indian context. While the GLA was already seen in pictures, it was only at the last Auto-Expo that we got to see it in flesh and blood, and we can safely say that it was the star attraction at the Mercedes stall.

Compact, car like dimensions, plenty of dynamic character lines, accentuated wheel arches and that high India specific stance make it quite a looker. If you have only seen it in pictures, you might find the car a size smaller in metal compared to the pictures.

In the front, you get a large twin-slatted grille with the familiar look bi-xenon headlights. The chunky front bumper has a matte cladding at the bottom which goes around the entire car just like in the Cross Polo and the Etios Cross which gives it that beefy SUV look.

The GLA definitely has the ground clearance but it does not have the tall proportions of a regular SUV which makes it look like a proper cross-over that it is. A low roof line, masculine design and those big 18-inch tyres make it quite a stunner. In fact all the cars from the MFA family have inherited good looks and the GLA is no different.

Stepping into the GLA will remind you immediately of the A and the B-Class. Being from the same family, the GLA boasts the same interiors with some minor changes.

The cabin feels quite roomy and this also thanks to the Panoramic glass roof which further accentuates the roomy feeling. The dashboard is a blend of black and a carbon-fibre finish which looks quite sporty and feels well made too.

The air-con vents sport a bezel finish which is unique to the GLA and they look great. The only thing that looks a little out of place on the dash is the infotainment screen which feels like its jutting out of nowhere. Popping out from a flush fitting space and a slightly larger screen would have made it much better. The aircon again misses out on climate control despite the GLA being an otherwise very well equipped car.

Getting the right driving position is easy with the electrically adjustable drivers seat with memory and its just as easy for the co-passenger too with the seats getting the same features as the driver.

At the rear, the GLA may not be the most spacious car but its not cramped either and long drives pose no problems as long as there are just 2 passengers at the back. The boot has a good 421 litres of luggage space however, part of that space is partly swallowed by the space-saver just like in the A and B-Class. Still there is plenty of space for those weekend trips or more and the easy loading area is a plus as well.

For the Indian market the GLA gets 2 engine options. The GLA 200 which is a 1991 cc turbo-petrol unit pushing out a good 181 PS and the GLA 200 CDI which gets a 2143 cc diesel unit which pumps out a smallish 134 PS. The surprising bit is that both the petrol and the diesel unit put down an identical 300 Nm of torque.

We got in the petrol variant first. Its a refined motor and loves to be revved. Putting the car in manual mode and working the 7-speed dual clutch gearbox with those lovely paddles behind the wheel reaps greater rewards and the bonus is a delightful exhaust note from those twin pipes at the back. In regular Eco mode though, the gearbox can be a little slow to respond. Getting in the diesel immediately, you feel a slight buzz through the pedals immediately telling you about the oil burner in front.

With just 134 PS to play with the diesel is more for the average commuter than the enthusiast. Since the torque in the diesel is available much lower in the power-band, the diesel engine has slightly better drivabilty because of which it is easier to coast in higher gears however, when outright performance is called for the diesel motor feels a little lacking. The diesel does promise efficiency though and with the company claiming over 17 kmpl, it does promise to be the most fuel efficient SUV amongst its rivals. A roadtest will determine exact numbers soon.

For the wealthy and the power hungry,Mercedes-Benz told us about the arrival of the GLA 45 AMG next month which with its powerful four-cylinder turbocharged engine will blow most sportscars out of the water.

The Indian variant comes with increased ground clearance and rightly so. All throughout our journey the GLA sailed over the worst roads and the biggest speed breakers without any problems. Ride quality is quite supple over most surfaces however sharp bumps tend to upset it and this was experienced more so in the diesel variant. The heavier diesel engine could mean a slightly different suspension setting and we think this might be the cause of the diesel variant feeling stiffer. The GLA comes with 18-inch wheels with a 50 profile tyre. We feel a 17-inch rim with a slightly higher profile could have definitely added more cushion to the ride quality.

Handling was quite predictable and the GLA went around corners quite happily. The increased ground clearance means there is some roll, but its always controlled. Front wheel drive meant the GLA does understeer when pushed hard, but with 235 section tyres you really have to drive like a hooligan to reach the tyres limits.

Will it be the Hero?

Well it certainly has all the makings of one. Mercedes-Benz told us that both the variants will come in top trim only since that's what the customers demand. As a result the GLA gets a long list of features which includes a panoramic sunroof which closes automatically when raining, electrically adjustable seats for driver and passenger, reversing camera, a brilliant Harmon Kardon music system, 7 airbags, Attention assist, tyre monitoring system and then some.That it looks good is an added bonus and the three pointed star on the grille means it has plenty of star value as well. What will finally decide if the GLA will be a Hero or not is the price. We think if Mercedes manages to keep it under 30 Lakh, there will be no stopping the GLA and this will pretty much be the car that will take Mercedes-Benz back to top spot. Watch this space for the launch of the GLA on 30th Sept and an exhaustive road test coming up soon.