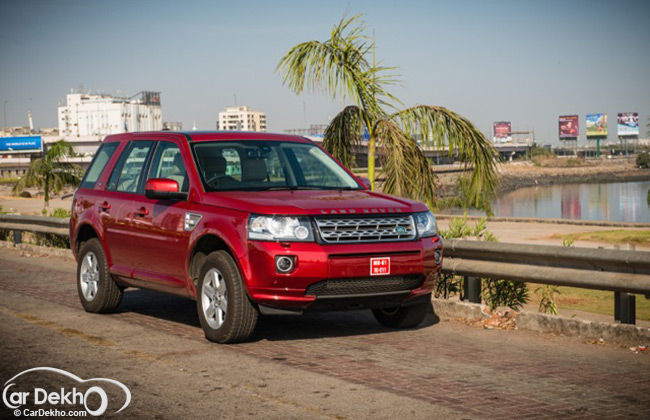 With an aim to bring down the pricing, JLR India began the assembly of the Freelander 2 at the Pimpri plant in 2011.

Since, then the company has managed to reduce the pricing of this entry-level SUV to the Land Rover brand.

Now, the Freelander 2 gets a mid-life facelift to refresh its styling and features. Some buyers weren’t convinced with the basic interior styling of the Freelander 2, which was more functional than form.

The British marquee has added some styling cues to the Freelander 2. We do an exclusive India-first review of this SUV for our readers.

Freelander 2 might be the entry-level SUV for Land Rover, but it gets all the styling cues of the British marquee. The signature clamshell hood forms a part of the fascia, as it gets some beautifying.

The front grille now relates to its eldest sibling the new Range Rover. The headlamps also get the Range Rover-like LED cluster. The new snout makes the Freelander 2 looks a lot similar to the new design of the Land Rover family.

The silhouette is untouched and it still retains the black B-pillar and stepped roof, which is a trademark of the Freelander design. The rear end gets a chrome strip, which makes the look Freelander 2 premium. Also, the tail lamp cluster design has been changed making it LED than the conventional bulb, further augmenting the styling.

The interiors of the Freelander 2 are where a sea of changes has occurred. The new instrument panel design has been evolved from the previous one.

The Freelander 2’s dashboard now looks urbane and chic than before that was more of rudimentary. The Freelander 2 now gets a new instrument panel, a new centre console layout and even the terrain response system knob is replaced with buttons, like the one in Evoque.

The other changes include new electronic parking braking and no slot for key. The centre console has received a major overhaul as it gets new touchscreen system that has reverse parking camera, Bluetooth connectivity and aux and USB connection.

The number of buttons have been reduced to make it easier to operate, while the good bit is that the size of the buttons is large, so one wearing gloves can also operate with ease.

The buttons on the steering wheel also receive some ornamental treatment.  The quality of materials and the fit and finish on the Freelander 2 is just like any other Land Rover. The space in both the rows is decent with sufficient support for your thighs and back. The electronic parking brake frees up the space for more stowage in the vehicle and even the boot is large to gobble up luggage.Even the cabin feels roomy thanks to the large glasshouse area. You sit high in the driver’s seat in a commanding positioning with good all-round visibility.

The Freelander 2 retains the 2.2-litre oil burner that churns out 188bhp of power and 420Nm of maximum torque. The engine has decent NVH levels, it is mostly on cold starts that the clatter melodrama is present, after that the noise settles in once the engine has warmed up. The power delivery is linear and there is no turbo lag. This engine has a strong mid-range and good enough low-range as well.

This torquey mill has sufficient power available at tap, that makes it easy to drive not just on the road, but even off it.  The lower spec version, SE has a detuned version of the 2.2-litre engine that produces about 148bhp of power, with the same 420Nm of peak torque.

Freelander 2 powers the rear wheels though a six-speed ZF self-shifting transmission. The shifts on the box are smooth and the response is decent. Put your foot down and it takes a few milli-seconds for the correct gear to engage.

With no change being made to the underpinnings, the driving dynamics of Freelander 2 remain untouched. The ride is smooth and composed at low and high speeds.The suppleness is good even on bumpy roads, as it doesn’t feel skittish on bumpy roads.

The handling of the SUV is decent and there isn’t much roll. Driving around corners isn’t fun, but it isn’t scary or the feel of nervousness doesn’t occur. The light steering wheel is easy for city driving and does weigh up well. Even the brakes bite progressively and the feel is good enough. The 255/65R17 tyres are meaty, and do grip well.The Wrangler tyres that our press demonstrator shod on, were quiet and didn’t roar on concrete.

The titivated version of the Freelander 2 gets trendier on the outside, while the interiors are now at par in terms of styling with competition. Critics who found the interiors to be basic, won’t have much to complain.

Freelander 2 was always more willing to dirty it boots than competition and now buyers will be happy with the interior design as well and at Rs  43.92 lakhs (ex-showroom, Mumbai for the HSE model) its worth the buck as Land Rover has succeed to maintain function over form.

So, one can now go off-roading in styling, thus retaining the DNA of Land Rover. The lower trim SE comes for Rs 38.67lakhs (ex-showroom, Mumbai).