The Kia Carens may not be an Innova Crysta rival in price, but it may well be an alternative in capability 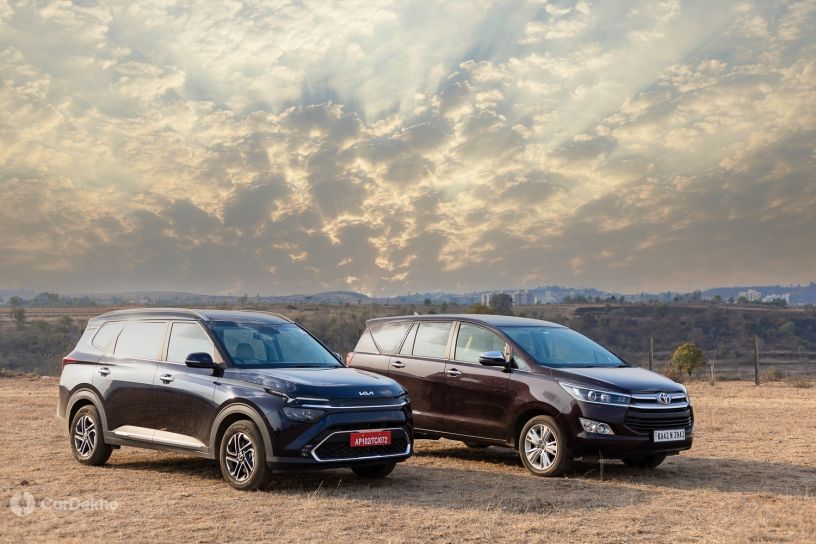 Many have tried to end the Toyota Innova’s dominance in the MPV space but it’s seemingly an order too tall. The Kia Carens, then, seems to have the makings of a strong challenger, even though it may not be a direct competitor to the Innova Crysta. After all, its prices end where the Toyota’s begin! Nonetheless, we couldn’t help but wonder if it could match or even beat the Innova Crysta on the space and practicality front.

So can the Kia Carens be considered as an alternative to the Toyota Innova Crysta or is there a relative compromise for the cost savings?

We’ll leave the opinion of which one looks better, to you, but neither one of these cars are subtle with their styling cues and that’s largely down to how their headlights are designed. Many found the Carens’ design to be a touch polarising but that is a sentiment we experienced even when the Innova was rebirthed as the Crysta and it is a look that will grow on you with time.

FYI: Yes, the vehicle pictured with the Carens is the pre-facelift Innova Crysta (which doesn’t get the new grille or dual-tone alloy wheels), as the latest version was unavailable for shoot.

The one advantage you get with the Innova Crysta is greater road presence. In part, that’s down to the 17-inch’ alloys vs the 16-inchers on the Carens but the Innova is also, for the most part, a larger car. Save for the wheelbase, it’s bigger on all counts vs the Carens.

It also has some of the SUV factor with its taller stance and higher bonnet line, while the Carens tries to blend some SUV appeal into its looks with body/wheel arch cladding and roof rails. If you like aggressive designs, you’d probably tilt towards the Toyota.

But while the differences in dimensions may seem large on paper, in reality, put the cars next to each other and they do look like they come from the same segment.

This similarity is also reflected in the boot space. With the last rows occupied and the backrests reclined to a comfortable angle (neither upright, nor too laid back), both cars have space for one large suitcase and a small trolley bag. The Carens offers some additional storage under the boot floor too.

With the last rows folded away, both have acres of space for the family’s weekend trips. A key difference is how the seats fold away, though. The Innova Crysta’s third row folds up to the sides while Carens’ fold flat into the floor - the latter being a better solution with regards to the driver’s rearward visibility.

Both cars offer enough space for 6ft tall users to sit in each row.

Both feel well built on the inside with appreciable fitment quality. The Kia Carens uses more leatherette touches on the door armrest and centre armrest, while the Innova Crysta gets velvety (almost suede-like) fabric on the door pads and even sunvisors. Both use hard plastics only but the ones on the Innova Crysta feel tougher and more durable.

While we won’t be comparing the driving performance of these cars as they’re in different specifications (Test Carens = Petrol DCT | Test Innova Crysta = Diesel AT), the Carens is the easier daily driver. It’s easier to maneuver in traffic due to the slightly smaller size and importantly, the considerably lighter and quicker-responding steering.

The Innova’s steering is quite heavy and needs some effort to use, especially for u-turns.

Both cars offer good comfort over bad roads but behave very differently. In the stiffer-set ladder-frame Innova Crysta, you will feel some side-to-side tossing over uneven roads and you’ll constantly feel some dawdling in the cabin, even on smooth highways. That said, this behaviour becomes less noticeable as you load the car up with more people.

In the Kia Carens, there’s more vertical movement you’ll feel as you go through potholes and ruts. The suspension isn’t soft standalone, but it is softer than the Innova’s and subsequently dives through the surface changes before recovering quickly.

So can you consider buying the Kia Carens over the Toyota Innova Crysta? Yes, you absolutely can. It isn’t a compromise in terms of space, practicality, usability, features or quality vs the Toyota and actually outperforms the Innova Crysta on some counts, while being significantly cheaper to buy.

The Innova Crysta’s time-tested reliability, longevity and Toyota’s aftersales support are its trump cards against the Carens. Being a rear-wheel drive car, it also offers benefits if you expect a lot of uphill driving, especially with people on board.

So, while the Innova Crysta is still an excellent buy for the whole family, the Kia Carens manages to offer so many of its qualities while asking for significantly less money, making it the winner in this comparison.