As I sit down to gather thoughts about the V-Cross, I can't help but grin at the fact that it made me happy. For a vehicle that sits in a niche that has been untouched by the biggest manufacturers in the country, you can call Isuzu gutsy for launching the pickup. But then, look at it this way. They have nothing to lose - especially considering the MU7 sank without a trace - do they? 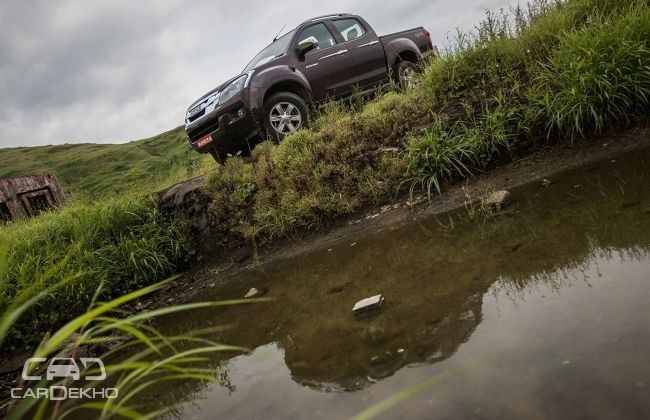 It isn't exactly what you would call polished. It is rather crude at the outset, but it is thoroughly likeable. There's no 'liquid flow', 'fluidic' or any such watery design themes here. The design is fairly straightforward and Isuzu seems to have injected every panel with an extra dose of muscle. What this translates into, is something with so much road presence, even buses and big trucks give away almost instantly.

The big, angry face takes all of the credit for that. The XL-sized slab of chrome drops big hints of the sheer scale of the vehicle, and the smoked out projector headlamps look menacing enough to make a toddler cry. Most of the chrome you see in pictures, including the ones on the boot and around the headlamps and door handles are optional extras, which I am super glad about. The blingy chrome doesn't get along too well with the burly proportions, and I would personally pick a stock V-Cross over one with chrome embellishments.

Viewed side-on, nothing other than the flared wheel arches and the rather plain-jane 16-inch alloy wheels would wow you. It's a straightforward dual-cab design executed cleanly. If you are a number cruncher, here's food for thought. The V-Cross measures close to 5.4-metres, 1.4 of which is taken up by the bed alone. Quick maths will tell you that an EcoSport or a TUV300 will fit in right up to the point where the body meets the bed. If that doesn't give you bragging rights, nothing will!

The bed itself gets a rugged bed-liner that is enough to haul a ton worth of stuff. Even the tailgate when opened can easily take substantial amount of weight. In fact, when we took a break from shooting the V-Cross, both our photographers chose the open tailgate to sit on and catch a breather while they chowed down on vada pao. So, yes, in case camping up in the hills is your idea of a weekend well-spent, the bed will be more than happy to accommodate a, err… bed.

Since the V-Cross is unapologetically massive, you have to literally climb inside the cabin. Isuzu has thoughtfully given a grab handle on the A-pillar, which aids ingress greatly. Once seated, the view outside the window is nothing short of adrenalin pumping. You sit nice and high, get a full view of the bonnet and practically every hatch, sedan and compact SUVs end somewhere around the base of your windowline.

If you have been inside a Chevrolet Trailblazer, be prepared for a sense of deja vu. The design is near-identical, including bits like the vertical centre console with a circular display for the air-conditioning status, and the twin gloveboxes. That said, quality levels are nowhere close to the big Chevy. The V-Cross has no qualms being a utilitarian workhorse. Plastics are slightly hard and feel crude to touch, but feel built to last.

The conventional beige-black theme does well to light up the massive cabin. I would have personally preferred an all-black layout, especially considering the truck is meant to handle muck and slush, and beige isn't exactly an off-road friendly colour. The beige fabric on the seat too is a dirt magnet, so you will have to be careful about soiling the seats.

However, the seats are super soft and have brilliant cushioning, especially around the side. While there's plenty of range in the seats themselves, a little more rake on the steering would have been nice. Even with the seat at its lowest and the steering at its highest setting, the wheel felt a notch lower than I would have liked. Sadly, there is no telescopic adjust for the steering either.

The feature list includes automatic climate control, a multi-information display sandwiched between the analogue instrument cluster and steering-mounted controls. Weirdly enough, the steering controls and speakers are standard, but the touchscreen infotainment system is an optional extra. The system itself isn't too great in terms of UI or response, and we would rather look at the aftermarket for better and cheaper alternatives.

Getting into the rear is a bit of a task if you are a tall bloke. Unlike the front doors which open nice and wide, the short rear door has limited travel. Legroom and shoulder room is barely a concern, but we do wish there were a couple of bottle holders in the door pads. The central armrest is a nice touch, and so are the under-seat storage areas.

The V-Cross can be a great road-tripper. Considering the massively practical loading bay and the spacious cabin, that can easily seat five. Admittedly it isn’t among the most well-finished interiors around, but it makes up for it by being comfortable.
It is properly comfortable on the move too, where the suspension pretty much chugs down every pothole, crater and hillock in sight. As expected of a setup like this, occupants will rock side-to-side whilst going over undulated surfaces, but it never gets uncomfortable or tiring.

The rear half of the cabin rides reasonably flat too, in spite of having next to no weight over the rear wheels. Then, there’s the 225mm of ground clearance that laughs at pothole-stricken roads and off-road obstacles. The basics, including the approach and departure angle aren’t all that bad, but the length is the chink in the armour. Getting beached solely because of the long wheelbase will be common affair if you subject the V-Cross to hardcore off-roading. And, in case you planning on doing that, we’d recommend swap the tarmac friendly MRFs to something more suited to getting down and dirty.

The big Isuzu gets shift-on-the-fly four-wheel drive as well, that includes a 4L (four-low) setting. I remember getting stuck with the nose pointing towards the gates of hell, and the tail pointing up towards the sky. A quick shift to 4L got me out without a hiccup. You can head out venturing into the unknown if you feel like it. There’s enough brute force to get you out, in case things get sticky.

All that grunt is courtesy Isuzu’s tried-and-tested 2.5-litre diesel engine that whips up 132PS and 320Nm. That isn’t a lot by any measure, but in my books – it doesn’t need any more either. The way the torque is delivered is grin-inducing to say the least. It kicks in early – just a smidge below 2,000rpm – and stays put till your hand reaches out to the gear lever for an upshift. You can stay in a gear higher and just hold on to the accelerator to execute an overtake; there’s enough shove to not warrant a downshift every now and then.

Driving in choc-a-bloc traffic isn’t a forte, though. The travel on the clutch pedal is expectedly long, which will strain the left knee. The gear throws are long too, but are sure-slotting. Think of the gear action of a Mahindra Scorpio, only slightly better. Then there’s the steering that is predictably heavy at low speeds. In isolation, you wouldn’t mind the weight. But climb inside the V-Cross to drive one after you are done driving a small hatch or even a compact SUV (like the Creta for example) and the weight becomes apparent instantly. The same weight is just what you need on the motorways. It feels rock solid and hugely confidence inspiring.

The ride is ever so slightly bouncy, but it never gets uncomfortable or nauseating. The motor too is relaxed at triple digit speeds and feels like it can cling on to those speeds all day long. Drive up to a ghat, and the heavy steering will make sure you have your weekly dose of arm workout at once. It takes close to four complete rotations to go lock to lock. Cornering will obviously not be a forte considering we’re talking about a truck here, but it does reasonably well here too. You will feel a significant amount of body roll, but it does get back in line pretty much instantly. Braking is a fuss-free affair, and the V-Cross rolls to a stop without much hoopla. Hard braking will induce a substantial amount of nosedive, but it holds its line under hard braking. On the safety front, there’s anti-lock brakes and a couple of airbags.

Like I said, the V-Cross will make for a brilliant road-trip companion. It can chow down the miles effortlessly and carry four of your friends and their weeks’ worth of luggage along. If I were to buy one, I would get the optional bed cover too – for two reasons. One, it protects the bed and whatever you choose to store in it from the elements. Two, it looks ridiculously cool. The D-Max V-Cross then, isn’t going to be a head buy. There are plenty of logical reasons to strike it off the consideration list. Reasons to buy it include the fact that it makes you want it. The fact that it is hugely capable and will be as reliable as a Labrador is just a bonus.