Published On Dec 09, 2014 By Prithvi for Honda Mobilio

Many have come and gone, but the all important MPV segment has a new name to attend to. It is the Honda Mobilio versus the erstwhile Maruti Suzuki Ertiga. Which of them is the perfect blend for your extended family, let us find out? 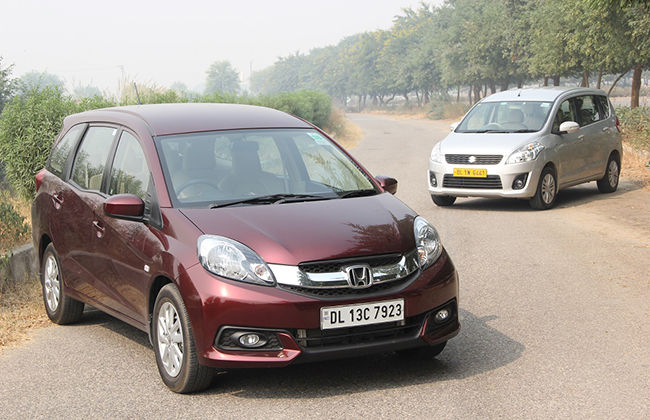 Honda Mobilio has been one of the biggest and the most awaited launches of this year, especially since Honda did not feature in this space until now. Until recently, it was Maruti Suzuki that ruled the roost in this segment with first the Omni, then Versa, followed by Eeco and the Ertiga back in 2012. For obvious reasons fitting in perfectly in this battle it's Ertiga versus Mobilio.

Honda Mobilio as most of us would be aware and if not is based on the same chassis as the sub-4-meter compact sedan - the Amaze. Therefore certain elements and features would be pretty similar to that of the sedan. Whereas when we talk of the Ertiga, its chassis is based on the swift platform but does not have any similarity with its sibling hatch. Head-on, the Honda Mobilio would look a bit familiar courtesy headlamps, bonnet and grille which are identical to the Amaze.

Its ‘H' design front grille with massive chrome is an eye catching element not to forget the new bumper that bears sharp edges. In comparison, Maruti Suzki Ertiga has a new face altogether which features pulled back headlamps, a black plastic front grille, massive air intake incorporated within the front bumper which is curvy in design. Referring to their respective fog lamps, the Mobilio features oval shaped lights while the Ertiga offers circular ones.

On to the side, Honda Mobilio features sharp lines which rise from the front to the rear whereas in the case of Maruti Suzuki Ertiga the design language is pretty simple and straight forward. Bulged wheel arches characterize Ertiga while Mobilio provides flatter surfaces on its arches. Variant recognition in the form of a DDiS monogram is only visible on the front fender of the Ertiga while in Mobilio there is no such thing. The Ertiga being the VDi-variant features side view mirrors with indicator inserts whereas the Mobilio in its V-variant does not cater to this feature.

However having said this, the top end variant does cater to this feature. Going down further, there are alloys in the Mobilio while the Ertiga offers plastic hubcaps though the ZDi variant does feature them. The rear three quarter of the Mobilio is more pronounced than that of Ertiga, giving it more substance in design esthetics. Specific to the rear quarter, the window size in Mobilio provides better visibility to third row passengers in comparison to Ertiga which is smaller in size.

In fact the petrol tank lids on both these MPV's are different; Honda provides a circular one while Maruti has a square design on offer. Location of external antenna's to differ in their case, as in the Ertiga it can be found in the front while in Mobilio it is towards the rear. Overall in sheer profile, it is the Ertiga that seems taller of the two.

At the rear, it's Mobilio that comes out on top. This is all due to its edgy tailgate that grabs the naked eye almost instantly. When magnified, the tail lights of Honda are more wide spread in comparison to Maruti. Lights on Ertiga seem taller and compact in comparison to Mobilio that provides a bit compressed design. Both vehicles cater to brake lights however their placement is different as in the Ertiga this particular feature can be found on the top of the tailgate while in case of Mobilio it placed inside right towards the top within the rear windscreen.

Model and variant badges are more prominent (bigger in size) in Ertiga when compared with Mobilio wherein one would really need to focus in order to find out details. Plastic housing featured on the rear bumper clubbed with indicator inserts does provide an edge to the Mobilio over its competitor. Thus it would be safe to conclude that Ertiga's rear end is plain and subtle whereas Mobilio is highlighted with a lot of sharp edges which is undoubtedly an attracting factor.

There is a stark difference between both their cabins. Honda Mobilio caters to dual tone interior (beige and black) while Ertiga provides a combination of beige and light brown. When introduced for the first time into the Indian market, the dash of the Ertiga seemed very up market for it time whereas when we look at the Mobilio its unit is very similar to the one available on the Amaze.

In our view this inter sharing of components has resulted in keeping the costs done by Honda. Maruti Suzuki Ertiga therefore provides 4 circular dials of different shapes and sizes incorporated within its instrument cluster along with a digital information display. In comparison to it, there is smaller instrument cluster with 3 circular dials and a digital display on the Mobilio. In fact the most prominent one is a bigger speedometer with a relatively smaller RPM meter. The VDi variant of Ertiga which we had for this test featured steering mounted controls while the V - Variant of Mobilio did not cater to it. However, on the top end model this particular feature is available in the Mobilio.

Moving on, there are silver accents towards the front in the Ertiga while Mobilio features a wooden finish console. The shape of their A/C vents to differ as one is square (with silver surrounds) and the other circular (with chrome surrounds) in design. Both offer integrated music systems however due to its recent introduction the touch screen unit on the Mobilio does make an impact so is the availability of a Navigation system which is a big bonus in its case. In sheer look and appeal, the one in Ertiga feels a bit more premium even though it might be old but still the quality of buttons did impress us. Having said this, both systems offer the usual tit-bits like CD, MP3, radio, aux-in, & USB though Bluetooth connectivity is only available on the Honda. The presence of a reverse camera in the Mobilio is an added benefit to the user which is not there in the Ertiga.

In regards to overall comfort, one can confidently say that the Mobilio outshines its rival the Ertiga. Both have decent room upfront however when it comes to the middle row the Mobilio goes one up due to better leg, shoulder and head room. Similar is the case with the last row which can be better utilized in the Honda when compared with Maruti.

Since Mobilio is an extension of the Amaze, a lot of attributes like cabin layout and feel give an impression of the sedan. In regards to boot space, it's once again the Mobilio that provides better depth when all three rows are up. Most of the safety aspects are the same on both these vehicles with dual airbags, ABS and EBD being the crucial ones on the list.

They might seem similar in propositions but the moment one takes a look under their respective skins one would realize that the power plants propelling these machines are different from one another. Taking the Mobilio for example, it features the same diesel engine as the one seen in the Amaze which is a 1.5litre i-DTEC. This 1,498cc diesel oil mill produces a maximum power output of 100ps at 3,600rpm with 200Nm of torque at 1,750rpm.

On the hand the Ertiga features the same DDiS diesel engine as seen in the Swift and Dzire for that matter. The 1,248cc unit has a maximum power output of 90ps at 4,000rpm with 200Nm of torque at 1,750rpm. With both offering a 5 speed manual transmission on board, it's the Mobilio that provides an exciting gearbox out of the two as its caters to sleek shifts and has the right calibration to keep you engaged at all times. Though there is a bit of under lag especially below the 2,000rpm in the Ertiga whereas in Mobilio there is no lag with gradual acceleration.

Get behind the wheel and their distinctive personalities come to life. Mobilio feels more like a car be it its interior layout or on road performance it would still remind you of the Amaze. This can be a USP for those who like a sedan sort of a feel but for me personally it was a no brainer considering that the exterior and interior appeal is fairly striking. Ertiga as it ought to does feel like an MPV, which is good thing. From standstill, the initial leap is better in the Mobilio whereas it comes to the mid-range it is Ertiga which has a stronger upper hand.

Like the gearbox, the steering feel of the Mobilio is way better than the Ertiga. I really liked the driving position of the Mobilio in comparison the later. As for ride both are at power with each other however overall feel is slightly better of the Ertiga. Due to its lighter weight (1,246 kgs) Mobilio handles better than the bulky Ertiga (1,845 kgs) which is not so easy to maneuver of the two. Swallowing potholes and broken roads is tackled well by the Ertiga while in the Mobilio it could get a bit hard due to a softer suspension setup which a negative for this MPV.

Falling under the highly competitive MPV segment, Honda Mobilio has a lot to offer. Most updated in looks, feature rich interiors and performance that not only helps one take notice of it but also enjoy the vehicle at the same time. This does not mean that Maruti Suzuki Ertiga is out right bland.

It might feel a bit dated but still has Maruti brand image and value attached to it which is why the commonest of common individual would like to vouch for it. Its engine performance is right up with the competition which brings us to the all important question which one out of the two? In my view, it has to be the Mobilio because of whatever we have just stated a couple of lines above most essentially I liked the way it drives which is crucial determinant in selecting a vehicle of my choice.