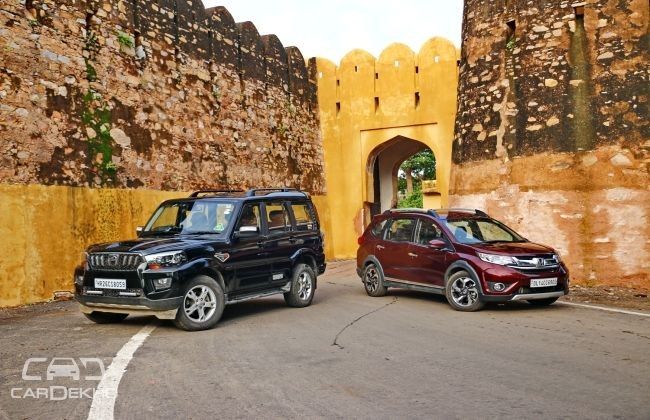 Today we have crossovers, compact crossovers, mini SUVs, compact SUVs and even SAVs on sale in the country. The bottom line is, SUVs seem to be coming in all shapes and sizes. A lot of buyers wanting to buy something comfortable enough to take their family out are still left wanting for a proper seven seater SUV though. Enter the the Honda BR-V. But is it an SUV you ask?

Well, according to SIAM, anything over four meters long, powered by an engine displacing 1500cc or more and with a ground clearance of over 170mm can be classified as an SUV. There's no doubt about the BR-V being a fantastic family car, with its kind of refinement, build quality, space and comfort. But can it really be a family SUV? To find out, we decided to pitch it against the Mahindra Scorpio, which has turned into one of the most popular SUVs over the years.

Despite both cars being essentially SUVs, aesthetically at least, they couldn’t be more different from one another. The Scorpio looks outright mean with its frowning headlamps housing projector beams and an LED DRL brow which makes it look even angrier. The front grille with its chromed out ‘fangs’ and muscular hood with the air scoop make the Scorpio look more akin to a charging bull than a car than can potentially seat seven. The rest of the car is the same — at least aesthetically — tall SUV that we’ve come to know over the years. It still gets the step in its roof and a flat tailgate.

The BR-V on the other hand looks more 7-seater people carrier rather than SUV despite the almost butch and muscular front end. The grille is a thick bar of chrome that runs between the headlamps which are rectangular and swept back. The bonnet is muscular without being overdone. From the front it looks calm and gentle unlike the Scorpio that looks ready to bare its fangs at the drop of a hat. The BR-V's shoulder line is quite prominent and it has windows almost the size of the doors themselves which give it a look more akin to a utility vehicle sans the sport.

Well, for starters, the Scorpio despite its butch looks and intimidating form is actually rather cramped inside. The first clue presents itself when you open the driver side door and notice the door is a bit short than it should be. Climb inside and the steering wheel feels a bit too close for comfort, the dash is a tad too high and the foot well too is on the narrower side. Plus, if you’re generously proportioned, like me, the driver side armrest is as useful as a waterproof napkin.

Same is the story at the rear. Three people can’t sit abreast and kneeroom is on the lower side too. But what the Scorpio lacks in space, it makes up for in equipment and features. You get a touchscreen infotainment system with Bluetooth connectivity, reverse camera and rear parking sensors.

The BR-V in comparison gets none of these apart from Bluetooth connectivity. Yes, no parking sensors or camera either! What it does get though is a spacious cabin which is a much nicer place to be in compared to the big black brute. The BR-V's seats are comfortable all round, even the third row is far from uncomfortable, though third row legroom has been compromised slightly in the interest of additional legroom in the second row.

The footwells are big and thanks to the slimmer seats rear passengers get more kneeroom and thanks to a virtually flat floor you can seat three with ease. Plus, you get keyless entry and a starter button along with electrically folding ORVMs, both of which the Scorpio does not. The BR-V comes with dual front airbags standard across variants and ABS and EBD as standard on all variants except the petrol base. Also, though the plastic quality is better overall, the recirculation switch however is an old fashioned slider rather than a button. In addition it’s unlit so it can be tricky to find while driving in the night if you’re not familiar with a car.

Both cars get automatic climate control but the BR-V also gets roof mounted rear AC vents with individual controls and enough stowage spaces and cubby holes to store a family’s worth of supplies. In the Scorpio, ABS, EBD and dual front airbags are available on S4+ variant onwards only. In addition you don’t get electrically foldable ORVMs. Finally, the Mahindra is essentially a 5+2 seater as the ‘third row’ actually comprises of jump seats whereas the Honda is full fledged seven seater.

The Scorpio employs a 2.2-litre 4-cylinder mHAWK diesel engine that makes 120PS of power and 280Nm of peak torque. Now despite what many might say, the mHAWK engine is actually rather refined. Start up the car and it does wake up with a clatter typical of diesel engines but it doesn’t feel gruff or vibey.

The gearbox though could have been better. The shifts are decent but tend to feel spongy, plus the gearbox seems to have no sense of urgency to it and throws are long too. Plus, on the highway the Scorpio's engine seems to be crying out for a sixth cog as revs start piling on quickly as soon as you hit 105kmph. Anyting over that and the fuel economy tends to take a hit.

The BR-V on the other hand is powered by Honda’s Earth Dreams 1.5-litre 4-cylinder iDTEC engine which dishes out 100PS of max power and 200Nm of torque. Now that might not sound like much, but for a car that weighs considerably less than the Scorpio, the outputs feel adequate. Of course, the bigger deal is that Honda is offering the BR-V with a 6-speed gearbox. The engine feels refined at start up but a bit of the engine clatter tends to seep into the cabin.

Slot the gear lever into first and the car takes off effortlessly. The shifts are smooth and the throws short, and the 6-speed box is an absolute treat to use. Every shift feels precise and urgent and ends with the thud of a well oiled machine.

Power delivery is smooth and linear, unlike the Scorpio, where a sudden surge of torque welcomes you the moment you cross 1800rpm. This makes the BR-V a smooth and fast accelerating car and you barely feel the acceleration on the go. In addition, sixth gear allows you to cruise comfortably at 100-110kmph with the tacho needle barely touching the 2000rpm mark. This results in a fantastic fuel efficiency figure which is not too far from the claimed 21.9kmpl.

The Scorpio is a ladder frame construction which basically means its body is mounted on a frame like most SUVs and it kind of shows. Ride quality is decent and the extra ground clearance ensures you don’t get stuck, no matter what the road throws at you, but it is far from being pliant. Don’t get us wrong, you won’t be uncomfortable but you won’t exactly be enjoying yourself either. The ladder frame tends to act as a disconnect between the car and occupants. So every big pothole sends a prominent judder through the car as it recovers from the impact.

The suspension setup is a lot better than before but despite the multi-link rear setup and double wishbone up front the Scorpio feels soft and tends to roll around in corners. Then there’s the sheer momentum it tends to carry, especially around downhill turns. This translates to harder than usual braking. The brakes can easily take the stress and keep on going but it does translate to faster wearing of the brake pads in the long run. Then there’s the steering, there’s no other way to put this but it takes effort to drive this car. Again, the steering is lighter than before but is still rather heavy and the weight feels prominent at crawling speeds.

In contrast the BR-V is one of the most comfortable cars to drive in its segment. The steering is light, gearshifts are light and the monocoque construction makes a huge difference in the way the car behaves on road. Potholes and undulations are taken care of with minimal fuss. The bigger ones do tend to make themselves felt but the experience is rarely ever jarring. Even out on the highway the BR-V feels surefooted and confident. The steering feels light to maneuver in the city and decently weighted at higher speeds. Though this car isn’t built to devour corners it can still hold its own in the twisties so long you know where its limits are. Be gentle and it won’t disappoint. The brakes work well too and it tends to brake well even under hard braking.

The Scorpio is a rugged SUV that can clamour over any obstacle that may have the misfortune of standing in its way. But as an everyday or family car the BR-V makes a much better case for itself. It may not have a touchscreen entertainment system or rear parking sensors, rain sensing wipers and automatic headlamps, all of which the Scorpio can be quite smug about. But the Scorpio tends to lag behind when compared to the Honda in two crucial areas, occupant comfort and ease of driving. The BR-V is almost effortless to drive and keeps its occupants in utmost comfort, while the Scorpio with its bench like middle row and thick front seats can only play catch up to the Honda.

The BR-V is a lot more usable, has more stowage spaces, split folding seats and 691 litres of boot space with the third row down, coupled with an extremely low loading lip. So where is lacks in equipment it makes up for in sheer utility and not to forget, it comes with dual airbags as standard across the range. Yes, the BR-V is expensive, with the top of the line VX diesel (the one you see here) priced at Rs 12.9 lakh ex-showroom Delhi. Compare that to the Scorpio's top end variant, the S10 which costs 14.56 lakh (The 2.2-litre is also on sale in Delhi-NCR now).

Let's not forget the Honda is more fuel efficient with Honda claiming 21.9kmpl as compared to Mahindra's claim of 15.3kmpl for the Scorpio 2.2.  In our opinion, the urban, more sophisticated buyer then will favour the BR-V over the Scorpio, since the Honda is a better place for your family. And of course, it is a Honda, which is one of the most trusted names in the world.