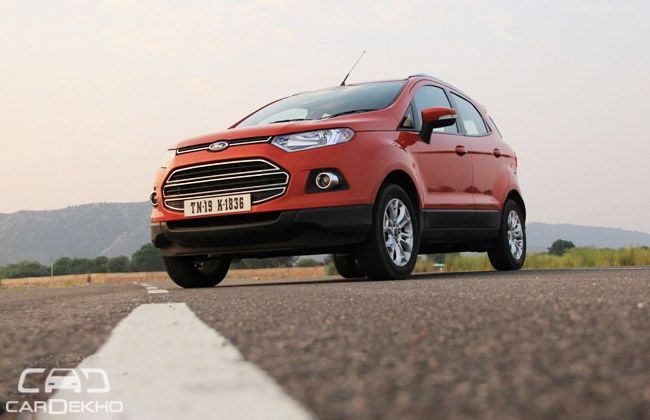 When Ford showcased the EcoSport for the first time at the 11th Auto Expo in New Delhi, the Sub 4 metre compact SUV dawned a new horizon. Its pre-launch online and outdoor promotions by the American automaker ensured that this SUV had made its mark in being recognized at all display locations and at the same time had managed brand recognition. Its gaining popularity and curiosity has meant that customers have had to wait for long to get the deliveries of their desired Urban SUV, especially for those who are going in for the Titanium variant of the diesel model. Ideally it should have been the diesel model in question but since Ford has been promoting its 1 litre EcoBoost engine in a big way we thought might as well get you an update on this one.

Evolution of Ford EcoSport from prototype to production has really been inspiring considering that this Urban SUV has managed to retain most of its design attributes from the very beginning. It’s aggressive styling and updated looks make it one of the most vibrant looking SUVs in the entry level compact SUV segment. Its prominent chrome highlighted grille forms the focal point along with a pair of slim headlamps clusters.

Culmination of a sculpted bonnet, flared wheel arches, 16”inch alloy wheels, silver roof rails all bring out its sporty character. A rear mounted spare wheel blends perfectly into the overall design along with elegant looking tail lamps. The right hand side tail light when looked head on serves as the boot opener as it features a small black button within its housing, which is a very well thought out feature for this SUV.

Cross utilization of interiors has become a common phenomenon, thus the EcoSport shares a similar cabin as the Ford Fiesta. Even then, there is a sense of curiosity to finding out what lays within. Therefore, the Titanium trim of EcoBoost model features Keyless Entry, Start Stop Function, leather upholstery, climate control, height adjuster for the driver, reverse parking sensors and Microsoft’s SYNC interface. Culmination of all these elements puts together an appealing interior though the quality of plastics on board isn’t that impressive as one would have liked it to be. Nevertheless, it still suffices keeping the overall cost in mind and the level of comfort is truly worth experiencing, especially on those long drives. The front row offers ample of leg, shoulder and headroom with a centre arm rest only for the driver which comes in pretty hand while driving on the highway. Under thigh support is fairly decent in the front as well as rear. Though fitting in 3 people at the back can pose to be issue, since there is lack of shoulder room. Rest headroom and leg room are satisfactory with both front seats pulled all the back. 60/40 rear split further ensures an additional 750 litres of space.

Portraying sharp lines, the front dash features a 3.5 MFD screen that serves as an information display for both audio and vehicle controls. Its cell phone keypad inspired centre console with its silver surroundings bears controls for the music system on board; it not only looks sophisticated but feels nice when put into use. Inclusion of SYNC with voice command further enhances the cabin experience as one can just change music tracks by mere one command. Steering mounted controls are another benefit that make long drives very comfortable. In long drives like this one, storage plays an important role for keeping luggage along with small things here and there. Thus, the EcoSport offers a number of cup holders both in the front and the rear clubbed with a decent size glove-box that is vital for hoarding stuff. While 346 litres of original boot space insures the carrying capacity of this vehicle which is fairly impressive considering its overall size being sub 4 metre.

Despite its drooling exterior appeal and interior features, what Ford is really proud about is the power plant that propels this petrol variant. Known as “Ecoboost”, this variant features a 1.0 litre engine under the hood that speaks of refinement and performance. Its 999 cubic capacity unit delivers a maximum power output of 123bhp @ 6000rpm while torque stands at 170Nm @ 1400-4500rpm. On paper, the mere mentioned figures might seem a bit less but once behind the wheel is when you get to feel the swiftness of this Sub 4 metre compact SUV.

The level of refinement is very impressive from both engine and transmission. To point out, it has five speed manual gear box on board that works fairly well to provide decent shifts both within the city as well as the highway.

With a turning radius of 5.3 metres, the EcoSport comes in really handy when manoeuvring through crowded and confined spaces. Its overall dimensions of 3999mm in length, 1765mm in width and 1708mm in height are all contributing factors to this fact. Its ground clearance 200mm is another element that’s effective in its on and off road capability, but the absence of a four wheel drive system is missed when taken out for some mud bashing.

From a driver’s perspective, the driving position is perfect courtesy manually adjustable seat, which when clubbed with the feel of the three spoke steering wheel comes out to be really sporty. Independent McPherson strut with coil spring and anti-roll bar in the front followed by Semi-independent twist beam with twin gas and oil filled shock absorbers at the rear make for a good suspension setup. A combination of both enable EcoSport to go over potholes, broken roads and bad surfaces with utter ease as was the case when we used it on the highway and the city.

Handling characteristics are reasonably good, though one does need to be careful while applying brakes on high speeds as there is a slight amount of body roll. It can handle corners and turns with ease. Rest the availability of ventilated disc in front with drum brakes at the rear provide effective braking at all times. Since this is a reliability report, the most important aspect of this test is the fuel economy. How much do you think did the Ford Ecosport return over a mixed driving (city and Highway) of 700 odd kilometres? Considering that it’s just 1000cc, the SUV provided an economy of 12.5 kmpl on the highway while in the city it returned 10.5 kmpl.

Without doubt, Ford’s latest offering in the form of the EcoSport is being perceived well in the Indian market. Its price effectiveness with masculine exterior design and comfortable interiors give it an edge over rest of the competition. Pertaining to our observation, the EcoBoost is a gem of an engine providing refinement and performance persistently, though fuel economy is something that could have been dealt with a bit better considering that the power plant is just 1 litre. Overall the driving experience is truly enriching as this SUV can be attributed to a good road runner for both city and highway use.