We had reviewed the BMW X3 xDrive 20d some time back and now we present you the road test of the meaner BMW X3, the xDrive 30D. First things first, the BMW X3 as you know is the 2nd biggest SUV from the German luxury car maker after the X5.  The first generation BMW X3, code named F83 was launched in 2003. 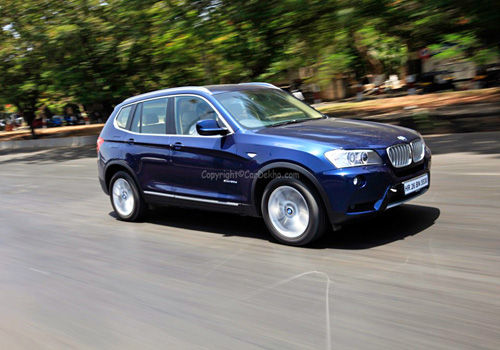 The BMW X3 received a facelift (code named F25) recently and we now have the latest second generation model available here. The BMW X3 though based on BMW 3 series is much larger in proportions and dynamics. BMW markets X3 as a ‘SAV’ (Sports Activity Vehicle).

We drove the BMW X3 xDrive 30D and find out how good it really is and also if the x30d is actually a notch higher than the x20d or not.

The typical BMW corona ring headlamps look enchanting when the day time running system is on. The aluminum kidney grille signifies that this is the meanest X3 from the line-up and also adds a lot of visual appeal to the nose of the SUV. The front bumper with integrated round fog lamps is large and blends neatly with the face.

Headlight washers are a part of the equipment list and come handy while off roading. The side profile is signified largely by the large 18 inch Y spoke alloys and meaty low profile tires along with the wheel arch plastic molding that are there as an protection while off-roading.

The glass area on the X3 is huge and is always a big plus point that an SUV has. The wraparound tail lamps are typical BMW with LED glow in them. You get a tail spoiler and aluminum roof-rail that adds the glitz to the exterior package. The BMW X3 xDrive 30d also gets a pair of round exhaust pipes. However, the wing mirrors miss out on turn indicators.

The BMW X3 xDrive30d has a large cabin, in fact the X3 has the largest available luggage space of 550 liters and with seats folded turns into 1600 liters of luggage space. The cabin on the X3 30d remains the same as the one on the x20d with a few changes and additions.

The i-drive system on both the variants remains the same. The X3 30d gets an extra TV function on its entertainment package list along with a 6DVD changer and a 12 speaker music system.

The auto gear shifter again is same as the one found on other BMW vehicles. Auto hold, hill descent, electro mechanical brake function buttons are laid around the shifter along with the drive select button. You can select between the Normal, Sport and Sport+ pre-set drive modes.

The dashboard and door panes get wood inserts making the cabin look rich. Driver and front passenger seats can be electrically adjusted for height, reach, tilt and backrest adjust. The seats also have memory function as standard option. The rear seats are 40:60 split seats with foldable center armrest and adjustable headrests.

The rear passengers have an added rear AC vent that helps in cooling the large cabin area of the X3. The seat upholstery is in leather and seating is very comfortable in the front and at rear end. Three passengers can sit very comfortably at the rear. The rear side windows get a set of manual foldable sun blinds, which are a good addition to keep matters cool and private.

The overall quality of the components used in the BMW X3 is superior and appear to last for ages. The comfort level in the cabin is exemplary and true to BMW standards. As mentioned, the tail gate opens automatically using the remote button and also closes automatically when you press the button given on the tail lid; this is a very convenient feature as you do not have to push close the tail gate.

The BMW X3 xDrive 30d is powered by a 3.0liter Turbocharged Six Cylinder Diesel engine that makes it a lot powerful and torquey as compared to the X3 xDrive 20d.

This 2993cc 6 cylinder engine makes 258hp of power and has a very meaty torque figures of 560Nm between 2000 to 2750 RPM.  This is a very powerful engine from BMW and is mated with a 8speed tip-tronic automatic transmission.

The X3 30d is also aided with the Auto start stop function that turns off the engine when power is not required e.g. when you are waiting in a traffic jam or at a signal for long. The engine comes back to life when you tap the accelerator.

The X3 30d has a meaty roar at idle and it is due to the six cylinder engine that is busy at work. The engine is refined and very powerful to pull this big SUV around. The 8 speed automatic transmission works like a dream with upshifts and downshifts done without a jitter. The renowned all-time 4wheel drive system from BMW namely the xDrive is very intelligent and performs flawlessly on the X3 30d.

The overall ride quality is of very high quality and the performance of the 6 cylinder engine is amazing. We touched speeds of 195 kph during our express way run and BMW claims a top speed of 210kmph which is limited. The BMW X3 39d does a dash to 100kmph is under 6.5seconds and that’s noteworthy and mighty quick for an SUV.  Using the drive select modes you can alter the suspension, gearbox and chassis settings to the preset modes. In the Normal mode, the suspension is on the softer side and the gear ratios are evenly spread out.

The BMW X3 is a brute performer on the tarmac. The X3 comes with a long list of safety equipment that include front airbags, side airbags, front and rear head airbags, dynamic stability programme, ABS, DTC and EBD.