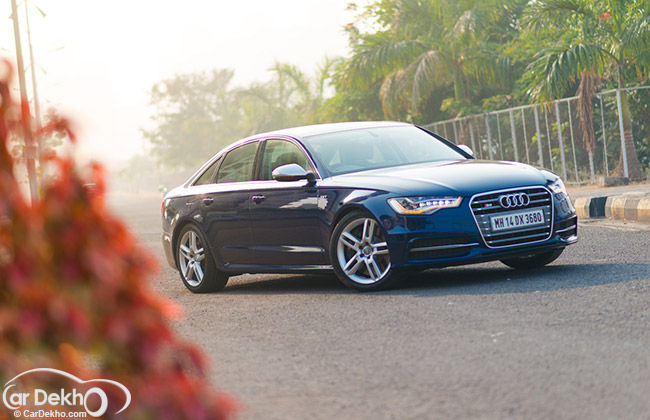 Audi has been one of the fastest growing luxury car brand in India and the company has been very aggressive with its expansion and product planning. It took no time to introduce its entire fleet of four-door sedans and SUVs, after which began the introduction of the S range. We had reviewed the S4 a while ago and now we get our hands on the S6, which is a mid-size luxury sedan. Read further as we share our experience with this performance version of the sedan. Last time we had a very quick drive around the Buddh International Circuit. This time, we lay our hands on this sedan for a longer period to understand how will it perform in the city and the highway.

The S6 is based on the A6 hence it retains most of the styling of this mid-sized sedan. The S6 does have a lot of differentiating factors from the conventional A6. Firstly, it gets aluminium-look ORVMs (outside rear view mirrors) and of course there is the S6 badge at the rear and also the V8T on the front fender.  The single-frame front grille wears the S6 insignia and also has double-design vertical aluminium look struts. The headlamp design is similar to the A6, with the same array of LEDs that makes it easier to identify from the far.

The side profile remains similar, however it does get side skirts that are flared by 14mm in the area of the wheel arches. The wheels are also larger as they are 19 inch ones with an aspect ratio of 255/40. The rear of this sporty sedan bears certain differentiating factors like a diffuser-like design, then of course the quad-pipes, which cannot be seen on the A6, atleast not on the ones sold in India.

The interiors of the S6 aren’t very different from the A6, it has a similar designed instrument panel, however there are some extra buttons on the S6. It gets seat AC and a few more features for complete adjustment of the vehicle when it comes to suspension, steering, exhaust etc. The S6 does get a lot more features the conventional A6, however it still misses out on some basic features. For instance, the moon roof is manual not automatic and even the steering adjustment for a vehicle like this is manual, instead of being automatic. We expect such features to be present even on A6 as well. Also, there is no direct USB input, however the car sports a six-DVD changer. We believe maybe a six-DVD changer could be swapped with LCD screens for the rear passengers, as the world is slowly moving away from the compact disc and maybe one-DVD player could have done the task. Also, no option to adjust the front seat from behind. Agreed it is a driver’s car, but the A6 has that feature.

The seats of the S6 are different as they cocoon around you, giving a better back and side support. The seats are harder too as it becomes easier for long distance trips. The space on the S6 is the same as that on the A6, no difference as it is the same chassis and even the boot space is the same. We don’t need to speak about or worry about the quality and fit and finish of the S6, as we were happy even with the interiors of the Q3.

The S6 gets a V8 turbo petrol engine with a cubic capacity of 4.0 litres that develop 420bhp of power and a whooping torque of 550Nm. The NVH levels are extremely low as the engine idles quietly, without even realising its on. Plant your right foot and you will realise how much awake is this V8. The thrust will produce a bellow in your chest. There is sufficient power in the S6 to drive on the highway and enjoy to the limit on winding roads. It is on the track, where the S6 might need some more power and that is what the RS6 has been made, unfortunately we don’t have it in India as the RS6 is a station wagon, which doesn’t work well for the Indian market.

The mid-range of this engine is strong as the twin-scroll turbochargers begin spooling, generating sufficient thrust. To add on to the power, the self-shifting 7-speed S-Tronic transmission enhances the power delivery. This transmission is smooth while upshifting, however it is a bit jerky while downshifting or hard braking in dynamic mode. But the shifts are quick and seamless. This transmission doesn’t blunt the engine’s performance and instead improves it.

There is an Efficiency mode, where the vehicle works only on one bank of cylinders (only four) to get better fuel economy when in the city, and this means lesser carbon footprint too. The power produced in the efficiency mode is good enough for city driving.

The Audi S6’s suspension has been stiffened for better handling, hence the ride quality is affected. This is one reason why the suspension is still stiff even in the comfort mode. Not extremely stiff and on smooth roads even at high speeds the ride is fairly supple. It is a bit too stiff at the rear than the front. The ride stiffens once to shift to the Dynamic mode.

The handling of the A6 ws good, but the S6 is even better. The Quattro ensures grip all the time and there is no lack of traction, and this also makes it easier to control. However, there is still some amount of understeer when you push it to much around a bend. The S6 does a good job otherwise and even the steering wheel feedback is good. It gentles weighs up as the speed of the vehicle is increased.

The S6 is a good performance sedan to own. It is powerful and even spacious and comfortable. Now, the only question that arises is if it is worth the cost and why are certain basic luxury car features removed from this sedan.