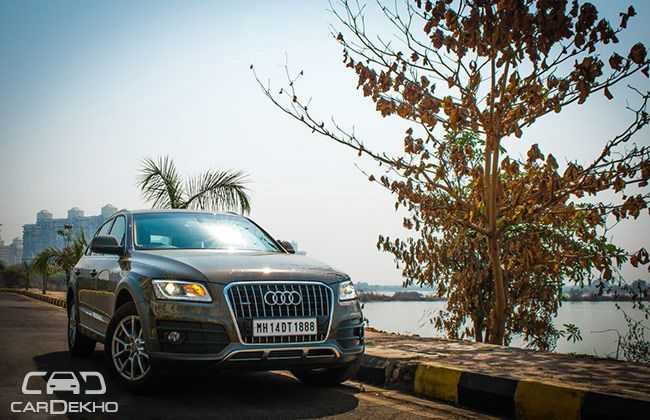 After a successful 2012, Audi began the New Year with the launch of the refreshed Q5. This mid-size luxury SUV has been around for a while and it needed some upgrades as the competitors have introduced new models or facelift.

The Ingolstadt based automaker hasn’t just refreshed the styling, but also made some tweaks to the mechanicals of the Q5.

Audi has been spot-on with its designing cues and also the product line-up for India. So, are the upgrades on the Q5 good enough or more is needed? We share our first-hand review.

The refresh version of the Q5 gets some cosmetic changes that enrich its existing design characteristics. The new single frame grille does remind of the A8 L that makes it look 3-dimensional.

The other revisions on the fascia include the new headlamp design, new bumper and even the fog lamps. The Q5 gets a new headlamp cluster that reminds you of the Q3. The layout of the LED strip is similar to that of the A4 titivated version and also the Q3. This new design along with the single frame grille increases the stance of the Q5.

The silhouette of the Q5 remains untouched, and the swage line progressively becomes crisper as it moves towards the tail lamp. The arches and the rocker still have the matt black cladding on it, for the dual-colour effect. At the rear, the tail lamp cluster has been tweaked as well.

Interior styling of the Q5 have always been lounge-like and Audi has retained this styling. Different exterior colours get different interior trims, and depending on the colour of your Q5, the interiors will be decided.

The quality of plastic and the fit and finish are as per Audi standard. The range of standard fitment is good as the Q5 now gets satellite navigation, along with Audi’s MMI, reverse parking camera and other fitments.

The seats on the Q5 are large and also comfortable, also the leather is also well augmented. The space in both the rows is sufficient with enough large room and headroom.

The front seats are electrically adjustable, however the thigh support on the rear seats is decent, although we wish it could have been better.

The Q5 is strictly a four-seater, thanks to the large central tunnel that intrudes into the cabin.  Also, the 540 litres of boot is large enough to gobble luggage for four.

The Q5 comes with a 2.0 TDI, 2.0 TFSI and 3.0 TDI engine variants. All the three engines now come with quattro option. We got our hands on the 2.0TDI, which has decent power of 177bhp and a maximum torque of 380Nm. This is a four-pot mill and it now also gets the quattro system.

The NVH levels of this oil burner are a tad higher, thanks to the diesel clatter. This is loud during cold starts, however it does tend to settle in once the engine warms up. This mill has decent power ratings and this power is sufficient for city driving and for cruising on the highway. The power delivery is linear, especially with the new seven-speed transmission, but there is a lack of punch that one will expect to get in an Audi. Hence for those looking for more power, should ideally settle in either for the TFSI version or the V6 diesel. To our dismay, the paddle shift isn’t standard on this engine trim. However, it is a standard fitment on the 3.0-litre V6 TDI.

The seven-speed self-shifting transmission on the 2.0-litre TDI has smooth shifts, though the shifts are lethargic. This seven-speed box helps to improve and spread the torque band evenly across the rev band, by engaging a gear with higher torque.

We have loved the BMW X3 for the handling characteristics, the Mercedes-Benz M for its ride and the Audi has got its sweet spot in between. It does handle well with a tad stiff suspension. Its just a tad stiff, not harsh and we aren’t even complaining.

We had liked the handling of the previous version of the Q5, and now with enhanced power and new gear ratios, it is even more joy as more power is available under your right foot. The Audi Q5 always drove like a sedan and the Quattro meant no loss of grip. The steering wheel is light and responsive, however the feedback is artificial. We wish it weighed up a bit more. The previous Q5 had a well-weighing steering wheel— something that driving enthusiasts will prefer.

You can also set the Q5 as per your requirement. It has comfort, dynamic, auto and individual setting. The comfort mode is preferred when you are cruising on the highway or driving in the city. In this set-up, the steering is light and the suspension is soft. In dynamic, the suspension is stiffened, the gearbox, throttle and the steering is more responsive. In auto mode, the computers decides the ideal setting, while in individual one can tailor the set-up as per needs in each of the department.

As a luxury car buyer, one will not be happy with only cosmetic upgrades. Audi has ticked all the correct boxes with the revamp treatment by adding some upgrades to its mechanicals as well. The new transmission does make a difference in the power and also justifies the need for an invigorate. The refreshed version of the Q5 is good option to procure in its segment. It always looked good and had very-lounge-like interiors also. The 2.0-litre TDI is the economical version with decent power and quattro to never lose traction. The 2.0TFSI has spirited acceleration part, and will appeal more to the enthusiasts.