The new Audi A5 promises to be something different than your usual bunch of luxury sedans. Is it? We find out. 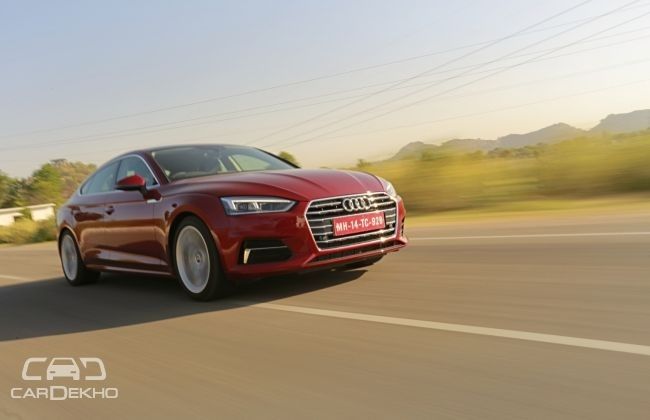 Gone are the days when only those with a tinge of grey in their hair could afford a luxury car. Now, more and more people in their early 30s are looking for a share of the pie. But the younger generation is not interested in just another elegant and comfortable sedan, they aspire for something more exciting and sporty, something that makes a clear statement. Audi claims they have a fix for this exact situation with the A5 Brat Pack.

What's that? It’s Audi’s way of bringing the new A5, S5 and the A5 Cabriolet in the country. We start with the most practical one of the lot, the A5, to serve this need. It sure seems to fulfill that promise, but what are you letting go in the bargain? We find the answer in Rajasthan.

Just Look At It!

No matter from which angle you look at it, the A5 commands your attention. And not in a flashy kind of way, but in a seriously stylish manner. The A5 sits long and low, suggesting a sporty  attitude rather than a practical one.

This being a fastback, the roofline glides into the boot, heightening the low slung feel. The A5 stands just 1386mm tall from the ground, 41mm less than the A4 and a massive 69mm less than the A6. Even when compared to its previous iteration, the new A5 is 21mm longer, has a 14mm longer wheelbase, is 11mm less wide and 5mm shorter than before. All of which adds to its stance.

The 245/40 R18 low profile tyres further add to this low slung look. There’s an intimidating facet to the design too and it starts right from the A5's face. The four creases on the bonnet swell and thunder down into the grille, which juts out a bit. This gives the Sportback a stance that suggests it is charging ahead. The A5’s aggressive look is further amplified by the headlamps. These dual barrel LED units have a sharp and angular DRL running on the top.

Another striking element of the design are the sharp body lines that flow right through, adding more weight to the lower half of the design.

Then there is the rear, which is even more striking in our books. The bulging wheel arches flow away from the cabin and give it proper muscular proportions. And though the boot has a thick and curvy lip which makes it look chunky, the sleek tail lamps have a lot of sharp edges to balance it.

Combined with the LED elements and the dynamic turn indicators, they definitely steal the show in the dark. The A5 makes sure once you set your eyes on it, you cannot take them off until it has disappeared into the horizon.

Right from when you open the frameless doors the A5 creates a sense of specialness. You have to drop yourself down into the seat, but it isn’t too low. The 8-way electrically adjustable seat means you can get a good view of the road ahead, and the tilt and telescopic steering lets you adjust the seating position perfectly.

The all black interiors, three-spoke steering, all digital cockpit and the wide centre console come together to make it feel very special too. The use of open pore black wood on the dashboard, centre console and on the door pads on our test car was a classy touch.

The front seats of the A5 aren't too deep, but do a decent job of holding you in place. The seat base and back are wide to accommodate even larger frames. Both the front seats can be electronically adjusted but lack memory function, which is available as an option.

The instrument cluster is the Audi Virtual Cockpit, which means an all digital display which can show a variety of relevant information like date and time, fuel consumption, speed, tachometer, odometer, drive modes, and much more.

On the other hand, the the infotainment display is not a touchscreen and shows vehicle settings, media, maps and Bluetooth connection for smartphones. But a big miss here is that this Rs 60 lakh car does not get Apple CarPlay or Android Auto as standard. And the screen isn’t a touch-sensitive unit either.

Speaking of the buttons, the air con vents get nice touch-sensitive switches which show the setting as soon as you place a finger on them. But to change the setting, though, you will have to physically toggle them - an ideal setup indeed as you can easily do this while driving.

Another thing worth mentioning here is the under-armrest storage, which remains partially open so you have access to your phone and which can be plugged into the USB charging port there. The stowage space is big enough to handle your wallet, phone, sunglasses and other small objects, all at the same time. The door pockets hold one-litre bottles and have some more room for storage.

The Audi A5 is a clearly a driver-focused car, but if you want to seat someone at the back, you can. Two adults can ride here in reasonable comfort for shorter journeys. There are rear AC vents as well with a 3-zone climate control.

Why short? Well, the legroom is adequate so long as there are two average sized adults, however the sloping roof line creates some complications. Yes, it cuts into the headroom and to keep it from getting tight  the seatback angle has been set quite upright. So, if you are over 60 years of age or 6-feet or taller, stay put in the front.

On the bright side, if you are travelling with friends or family, the A5 has a massive 480-litre boot which can eat up a lot of luggage. Adding to the convenience is the fact that it is a liftback and has a low loading lip height of just 669mm, which make loading even heavy articles fairly easy.

Fire up the A5 and the 2.0-litre diesel says hello with a slight rattle. But after that, it settles down nicely and the vibrations remain well under control till the 4,500 rpm redline. This is the same diesel unit which powers the A6 as well. And, though we have seen more refined units in the market, this unit still is pretty composed when it comes to in-cabin noise and vibrations.

Right from the time you lift your foot off the brake the engine starts to pull ahead confidently. With 400Nm of torque available right from 1750rpm, the A5 does feel lively right from the start and very apt for the city. The Comfort mode is good to amble around in the city calmly: the throttle response is toned down and the gearbox  shifts up earlier. The low rpm responsiveness lets you move around traffic even with light dabs of the throttle. If you are in a serious hurry it’s better to switch to Dynamic.

A bit of the throttle in Dynamic mode is enough to dart ahead effortlessly. The throttle response is sharpened, the transmission holds revs for longer. Torque comes on in a rush after 2000rpm, but with a 4500rpm limiter you won’t call it playful. Nonetheless, carrying this momentum is even easier, with 190PS of power of being made from 3800rpm, right till the 4200rpm mark. This means reaching triple digits takes a claimed 7.9 seconds. But, even then, the engine doesn't feel particularly punchy or sporty. In Individual mode you get to tune the engine, transmission and the steering feel seperately.

When it comes to the dynamic bit, we had high hopes. Since the car looks this athletic, we were expecting to have some fun with it. But as you begin to build speeds, you realise that this is just a sedan wearing some expensive sportswear. The suspension setup is tuned slightly more towards comfort and this makes the ride a little floaty close to the 110 kmph mark, especially if you are on an uneven patch of tarmac. The tyres remain planted but the cabin tends to exhibit vertical movement and it is a tendency that can't be altered as variable suspension isn’t offered on the A5.

Also, this being front-wheel drive and not a Quattro, the A5 doesn’t encourage you to make sharp directional changes either. The steering adds weight when you switch to Dynamic mode, but the feel doesn’t improve dramatically and you really wish that there was some more feedback from the tyres.

But it's when you realise how well the A5 takes potholes that all this starts to make sense. The A5 is supposed to a practical everyday car, and it is just that. It tackles bad roads fairly easily. The only time you feel the hit is while going over a broken patch a little too fast. Still, the suspension regains its composure quickly.

What’s surprising is that, despite its lower stance, the A5 didn't even scrape its belly once during our drive. Yes, not even once, and we started our journey through a village! This, on the latter part of our test, gave us confidence to even take on some mean looking speed breakers head on, and the A5 elegantly went over them. But, at the same time, when with a full load of passengers and luggage, we avoided the larger ones to ensure safe passage.

The steering is light in the Comfort and Auto modes, and makes for an effortless drive in the city. The slim A-pillars and the large rear glass means you have good visibility outside, and the car, despite its proportions, is fairly manageable in tight spots as well. The feedback from the brakes isn't too great either but they are strong and linear, managing to slow down the car quite confidently. Overall, it is a good city as well as highway companion.

The Audi S5 looks fantastic. You simply can’t ignore it. The muscular and hunkered down stance is its trump card. But if you are genuinely looking for a sporty and stylish four-door, the A5 just won’t cut it. For that you will have to meet the S5, the A5’s crazier cousin.

However, if you are looking to combine an exciting exterior package with a fair dash of practicality, the A5 deserves close scrutiny. You get comfortable seats with a practical rear bench, a massive boot with a wide opening, sportscar ergonomics and a ride quality that won’t make you wince over our city roads.

And when you intend to try your hands on some spirited driving, the A5, although not invigorating, won't disappoint you either. We expect the A5 2.0 TDI to be priced in the Rs 55 - 60 lakh range.  So if you are looking to drive every day, something which stands out but doesn’t compromise on practicality the Audi A5 Sportback would makes a lot of sense.