The A4 has been one of the bestselling models for Audi in India so when it came to replacing the car, Audi clearly had to tread carefully. When we saw the car in the flesh (or metal) in Bhubaneshwar we were quite impressed and eager to see how it behaves on our glorious Indian roads. 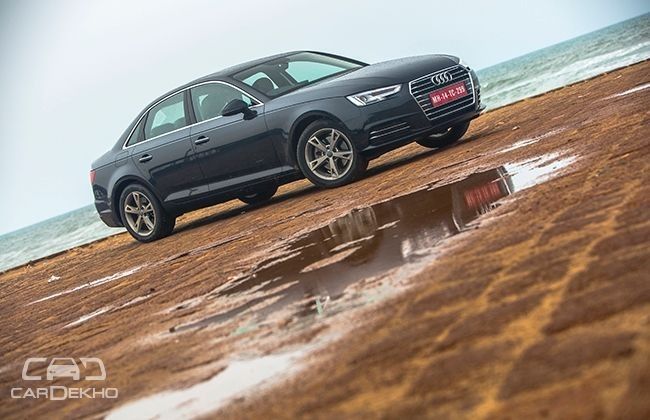 Aesthetically you'll notice that it doesn't look radically different from the current A4. To the uninitiated it could even be passed as a face-lift. But make no mistake that this is  actually a brand new car. The overall familiarity of the design is to keep the identity of the A4 intact, you cannot mistake it for any other car and it looks rather elegant in form. The new DRLs look good and edgy. They flank the 3D grille which is in tune with Audi's new design philosophy.

The shoulder line is quite prominent and runs all the way from the headlamp to the tail lamps. Speaking of which, the tail lamps are new and redesigned as well and the fluid turn indicators have trickled down to the A4 as well. The car looks bigger than it used to yet weighs 95kg less. It sits on 17-inch 5-spoke alloy wheels which add a bit of sporty character and the rubber is 225 section Hankook on all four sides.

Step inside the cabin and it feels different yet quite familiar. It's like Audi has taken the perfectly good A4 and turned it up a notch. And the upped notch is more to do with technology than anything else. The traditional clocks have been replaced by a digital screen which allows you to choose between different display options. You can have the traditional tacho and speedo flanking the small info display or you can choose to give prominence to the vehicle information wherein the clocks retire to the bottom corners of each end.

You can even choose the map as your central display to help you keep your eyes on the road. The luxury quotient has gone up as well. There is soft feel plastic and leather all around and you also get wood inlays on the dash and door panels. Though they do tend to look slightly out of place for they are now known to be more of  a Japanese trademark than a European or more specifically a German one.

Then there’s the MMI system which has experienced some growth, literally. The screen now measures 12.1inch across and displays everything you might or might not need to know. Also, it is one of the best displays you’ll come across in modern day luxury cars. It is crisp easy to read though the operation will take some time getting used to as the number of buttons have been reduced and scrolling through the options can prove to be a tad too distracting. But Audi has given eight shortcut buttons that you can assign to any function you like so you can have all your preferences at a touch of a button. The scroller knob also doubles up as a touchpad for easy access to contact lists.

The driver's perch is decently comfortable. There's ample back and side support but the squab could’ve been slightly longer. Also, finding the right driving position will take up a fair bit of setting up  and once you do, do remember to save it in the memory. Though the headroom is ample all around, taller driver (6’2 upwards) could feel restrained. Same is the story at the rear. It can seat four in comfort as the space in the cabin has increased but seating five is a challenge and the under thigh support also could have been better.

The car we got was the 30 TFSI which employs a considerably smaller 1.4-litre four cylinder turbocharged petrol engine. It might not sound like much but it does dish out 150PS of power and 250Nm of torque, impressed yet? It is the same engine that is employed in numerous VW cars and frankly it was only a matter of time before it came to this segment.

Start the car and wakes up in the most undramatic fashion. There’s no dab of revs or drama, it's quite straight forward. Put it into drive via the new rectangular gear lever and it takes off effortlessly. We being us, floored the throttle as we pulled out on an empty road just outside our hotel in Bhubaneshwar and the result was not what we expected. There was a sense of urgency from the engine but there was no pushed-in-the-seat drama. What we got instead was a linear and smooth delivery of torque right up to its powerband at 5,000rpm. And before we knew it we were well on our way to breach the speed limit. The acceleration is borderline undramatic but relentless.

You never run out of power and neither do you run out of the torque. And the new 7-speed STronic transmission complements the engine just as well. The shifts are responsive and are in essence based on the heaviness of your right foot. Keep the tacho from crossing the 2,500rpm mark and the shifts will be relaxed and focused more towards fuel economy and comfort. It can sit at 120kmph on the highway with the needle barely breaking the 2,000rpm mark thanks to the overdrive seventh gear. It will also let you coast rather than let engine braking kick in when you take your foot off the throttle.

Put your foot down however and keep the needle in the peak torque band and the A4 responds accordingly. The shifts are sharper and almost instantaneous, pull a paddle and the tacho needle starts to dance while the engine sings a brilliant note. The steering too is well weighed at high speed and light at docile pace. It feels sharp and direct, the feedback though is still not at par with the competition which does tend to take away a bit of fun even if only slightly. It is clearly focused towards people who want the controls in their own hands and it shows.

The suspension setup is on the stiffer side but yet the ride is pliant and forgiving. The bigger potholes do make themselves heard but are rarely felt. The brakes provide plenty of stopping power and great feel and are also fitted with the brake energy regeneration system.

All in all the new A4 is a great overall package. It looks familiar without looking staid. It rides well, is comfortable to be in and fun if not exhilarating to drive. And you can be rest assured that it will be quite fuel-efficient as well. There’s no doubt that the Audi will face stiff competition from the Mercedes C-Class, BMW 3-Series and Jaguar XE. But where the other three have specific focus areas, the A4 attempts to be a balancing act between comfort and spirited driving and succeeds to a certain extent. But as far as in car technology goes, it is far ahead of its competition. However, the pricing will play an important role in the sales of this car. We expect it to be between Rs 35 to Rs 42 lakhs ex-showroom, Delhi.