Published On Aug 26, 2020 By Nabeel for Renault Triber

Does the addition of an automated manual transmission make the Triber a more tempting buy? 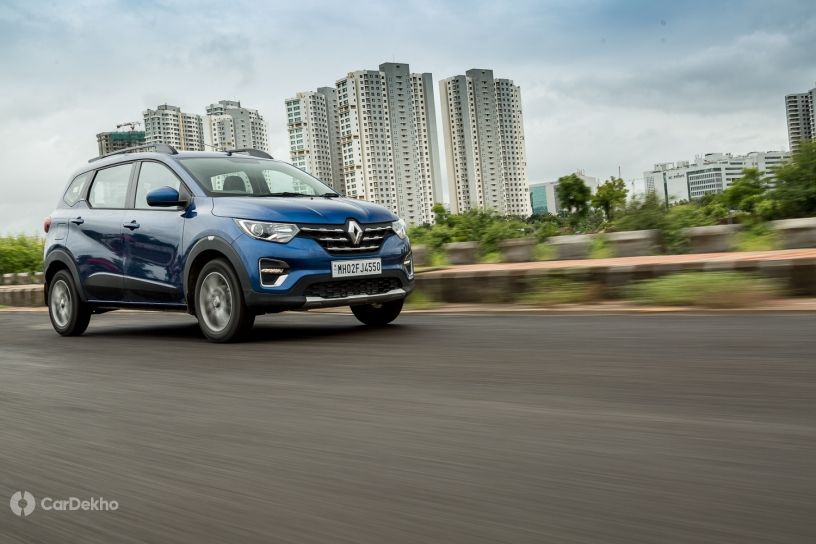 The Renault Triber is the most practical car you can buy in its price bracket. The spacious interiors, huge boot with the third row removed, and compact dimensions make it easy to drive as well. Now, Renault has added an AMT option that promises to further add to its convenience. Other than the automated manual transmission, there are no other changes to the Triber. So, in this review, we will be focusing on the drive experience to help you understand whether it makes sense to spend the extra Rs 40,000 on this gearbox.

Is It Any Easier to Drive in the City?

The Triber AMT is powered by the same 1.0-litre three-cylinder petrol motor that produces 73PS of power and 96Nm of torque. Considering cars at this price point offer bigger and more powerful four-cylinder engines, the Triber is at a disadvantage. To counter the power deficit, Renault has given the Triber AMT short gearing due to which, at city speeds, you don’t feel the lack of power.

In this AMT option, you get a creep mode. Basically, when you select D mode and release the brake, the car starts slowly moving forward which helps a lot in stop-go traffic or while driving uphill. Over flat surfaces the creep function works well but while going uphill the Triber does roll back a few inches before moving forward. The gear shifts are smooth by AMT standards and when driven leisurely, progress remains jerk-free. As compared to the manual transmission, the AMT version employs an extremely short third gear (max speed in third gear is 105kmph for manual and 80kmph for AMT). This results in less number of gear shifts for the automatic transmission. Combine this with the Triber’s compact footprint, light steering, and absorbent ride quality and the AMT version makes for a great city commuter.

Where you will feel a bit wanting, however, is when you need to execute a quick overtake in the city. The gearbox is a bit slow to respond to throttle inputs and even the engine lacks punch.

What About Highway Driving?

The engine’s lack of punch is even more evident out on the highway. Make no mistake, the Triber AMT cruises well at around 90-100kmph which is great on an open three-lane highway. But driving on dual carriageways, the Triber AMT struggles a bit. When you want to execute a quick overtake, the gearbox takes its own sweet time to downshift. With more passengers on board, the lack of punch from this engine and gearbox becomes even more apparent and you have to plan every single move. Even the motor gets quite noisy above 2500rpm. When combined with the Triber’s not-so-great sound insulation, the result is a car that doesn’t feel effortless as far as highway driving is concerned.

Now we expected the Triber AMT to be slower than its manual sibling, but the gap between the two is startling. In our 0-100kmph acceleration test, the Triber AMT recorded a time of 20.02 seconds (wet) which is a massive four seconds behind the manual variant (tested in dry conditions). In fact, it is also more than 2.5 seconds slower than the much cheaper Kwid AMT.

What About Fuel Efficiency?

Despite being lightweight and having a small 1.0-litre engine, the fuel-efficiency figures are a bit underwhelming. In our city run, the Triber AMT returned 12.36kmpl which is better than the manual variant but still low by segment standards. Out on the highway, because the Triber is a bit down on power and the AMT gearbox is slow to shift, we recorded a mediocre 14.83kmpl which is almost 3kmpl down on the manual variant.

Now that we have addressed the main change in the Triber, let's take a quick look at the rest of its pros and cons:

The Renault Triber’s suspension does a great job of absorbing even the sharpest of bumps with ease, especially at low speeds. Even at high speeds, the ride is comfortable and despite being a light car, it has good straight-line stability.

The Triber is an extremely practical car thanks to the plethora of interior storage spaces on offer. Up front, you get two large areas on the centre console, big door pockets, a cooled box that can easily fit at least four 220ml cold drink cans, and two massive gloveboxes.

The middle row of the Triber is rather comfortable, especially when compared to its rivals. If the third row isn’t in use, you can slide the middle row back and get loads of knee room. You can also recline the backrest by quite a bit, which in this price segment is unheard of. The bench itself is quite comfy with decent underthigh support. The dedicated AC vents for each passenger further enhance the Triber experience.

The Triber’s third row is going to be a bit cramped for anyone taller than 5 foot 10 inches, as far as knee room is concerned. But for the average Indian person (height of 5 foot 5 inches), this car’s third row is surprisingly comfortable. Unlike most 7-seaters, you sit quite high up and despite that, headroom too is unexpectedly good. But in case of a rear impact, things could get concerning with your head just inches away from the rear windscreen.

With all three rows up, the Triber has very little boot space. But if there are fewer people on board, you can remove the third row of seats and keep it at home. With the two seats removed, the Triber has a massive 625-litres of boot space. To put things into perspective, this boot is even bigger than the one you get on the MG Hector! It was enough for our three suitcases and two soft bags, and had more room to spare.

Apart from lacking in outright power, the Triber’s engine is also on the noisy side, particularly when you compare it to similarly priced rivals such as the Hyundai Grand i10 Nios and the Maruti Swift. Even the sound insulation isn't that great with a fair bit of wind and road noise seeping into the cabin.

The Triber’s top-of-the-line variant comes loaded with a decent amount of features. You get a 7-inch touchscreen infotainment system with Apple CarPlay and Android Auto compatibility, keyless-go, air-con vents for all three rows, tilt-adjustable steering column, and four airbags. But it misses out on things like driver-seat height adjust, steering-mounted controls, automatic climate control, alloy wheels, automatic headlamps and wipers. Even the touchscreen graphics look a bit dated when compared to the modern Hyundai system.

So with a price premium of around Rs 40,000 over the manual variant, is the Triber AMT worth the extra cash? If your driving is mostly limited to city commutes, absolutely yes!

The AMT option makes it a great city commuter thanks to its smooth shifts. Combine that with its other strong attributes such as the practical cabin and the comfortable ride quality and the Triber AMT is a great choice in the Rs 8-lakh bracket. But the AMT falls short when it comes to highway driving. Its outright performance is rather mediocre and even its highway efficiency is on the lower side.

If your usage is mostly limited to the city, the Triber AMT is a package hard to ignore. But if you want an engaging drive or a highway tourer, you are better off with the manual variant.