Published On Sep 07, 2012 By Ritesh for Chevrolet Captiva

General Motors is on a refresh spree lately. Two of its key products, the Chevrolet Cruze sedan and the Chevrolet Captiva crossover SUV got rejuvenated and tweaked. We drove the New Cruze some time back and were mighty impressed with it. Unlike the New Cruze that has got its changes mostly in the technical area, the New Captiva gets refreshed technically and cosmetically. We drive the New Chevrolet Captiva to find out for you what these changes really are and whether they make the New Captiva any better. 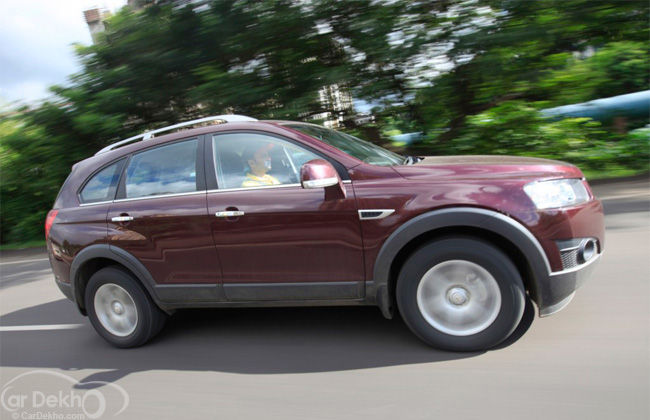 The Captiva is also sold as the Daewoo Winstorm in the Korean market and as the Holden Captiva in Australia and New Zealand in the same design form,while General Motors sells the Captiva as the GMC Terrain in the Middle East countries Opel Antara and Vauxhall Antara in Europe with slight changes and modifications.  The Chevrolet Captiva crossover SUV was launched in India in 2008 and since then has been doing well in its segment.

The New Chevrolet Captiva has got very aggressive looks as compared to the outgoing model. The New Captiva gets an all new face. The headlights are now much larger and have the stretched back design.  A new broader and much larger centre honey comb grille comes in.

This new honey comb grille is much wider and taller than the one on the older Captiva. Chrome inserts run across the border of the grille, enhancing the design. The Chevrolet Bowtie emblem that’s placed in the middle of the grill also gets slightly larger. To go with the new grille design, the New Captiva also gets an all new much larger front bumper. The bumper houses a set of round fog lamps that are placed much lower than the ones on the old Captiva. A lot of honey comb detailing is seen on the bumper around the fog lamps.

The lower section of the bumper gets the scuff plate in silver while the lowest part is left uncoloured intentionally as that’s the area that comes into contact and gets hit with rocks, slush, mud,etc. when off-roading. The bonnet on the New Captiva retains the sharp lines and the wedged design. The larger stretched back headlamps and the large grille along with the bigger front bumper make the New Captiva look bolder and aggressive in the front profile.

The side profile on the New Captiva remains unchanged. The neatly rounded fenders have plastic cladding along with the lower portion of the doors. The large wing mirrors are electrically adjustable and can be heated to beat the mist on them when needed. The New Captiva also retains the silver roof trails that make the SUV look taller.

The windows get the blacked out effect along with chrome detailing on the lower part. The grab type door handles get the chrome touch. The fake air dam on the front fenders is now much larger and sleeker in design as compared to the ones on the older Captiva. The tyre profile of the New Captiva remains the same and runs on 235/65 R17 HankookDyna Pro HP tyres mounted on 6 spoke alloys.

We have seen this Hankook brand of tyres on a lot of car models from General Motors right since the days of the Chevrolet Optra way back in 2003. For the record Hankook is a Korean tyre maker and happens to be the 8th largest tyre maker in the world. Coming back to the New Captiva’s side profile, the sharp waist line runs across the door handles and fades off just before the tail lamps.  This wedged waist line gives a muscular and strong look to the New Captivas side profile.

The rear section on the New Captiva remains unchanged with the flushed in large tail lamps making an imposing effect.  The rear bumper has the scuff plate and the unpainted area along with the body coloured part.  You get rear parking sensors and the boot loading metal protection on the bumpers.

A set of reflectors are also mounted on the rear bumper. The New Captiva also retains the Twin chrome exhausts as on the older one. The New Captiva, just like the old one has a twin opening tail gate; you can lift up the complete tail gate or you can just open up the rear windshield when required.  A rear tail spoiler with integrated stop lamp gives the rear glass a sporty touch. You get a large electric sun/moon roof as a standard fitment on the New Captiva LTZ.

The New Captiva also gets some changes in the cabin; let’s find out what they are. The New Captiva gets all-black leather upholstery as opposed to the beige one on the older Captiva. The dashboard also is in soft black plastic with a dash of carbon fibre band that runs across. The instrument cluster remains the same with the change in the back light colour from the older soft green to soft blue on the New Captiva.

The instrumentation is large and clearly laid out with bright red needles on it. The leather wrapped steering wheel is a four spoke affair with silver inserts and multi-function audio controls mounted on it along with the integrated Bluetooth telephony and audio streaming controls. The New Captiva also gets the cruise control feature on it. The steering on the New Captiva can be adjusted manually for height and reach.

The New Captiva comes with a manual dimming centre rear view mirror while an auto dimming type mirror would have been a very good inclusion. The automatic gear shifter lever also gets the carbon fibre insert on it.  The New Captiva also gets an electric hand brake as opposed to the manual one on the old Captiva.

An Eco mode button also comes in on the New Captiva more of which we will speak in the drive section. As a result the centre console gets a lot of space. A twin can holder can be slid back, opening up the deep storage compartment apart from the closable storage box under the centre arm rest. There is a lot of storage areas spread all across the New Captiva’s cabin area right from the dash to the door pads to the centre console. The driver side seat can be 8-way electrically adjusted and has lumbar support.

The front seats on the New Captiva offer good amount of under thigh support and are well cushioned. The head rests are uniquely shaped and can be adjusted 4-ways. The middle row seats are also very well designed offering superb under thigh support and the back rest can be manually adjusted for the best possible incline level as per your comfort needs. The middle row misses out on the AC vents while the third row gets the 3-speed adjustable AC vents mounted on the left side. The middle row seats are 40-60 spilt folding seats and come with a centre folding arm rest.

The New Captiva comes with the Flexi-Seating feature where you can fold the third row seats fully into the floor level when not needed or while loading luggage in the boot.  The middle row seats can also be folded down and in front to increase the luggage loading area to a mighty 1577-liters. Height adjustable seat belts are a very comfortable feature that the New Captiva comes with.  The chrome door openers and satin finish door handles on the inside give a rich feel to the New Captivas interiors.

The New Captiva has loads of leg room and head room all around; tons of space makes the cabin feel like a playground of sorts. The third row seating is also not very uncomfortable for an average height passenger for short distances. The fit-finish and build quality is good on the New Captiva.

Start the engine of the New Captiva and you immediately realize the smoothness and refinement level of this new engine. The New 2.2 litre engine has a smooth idle note. Shift to the drive mode and the New Captiva shoots ahead with a punchy pickup. The new engine is very refined even when it is revved hard. The power delivery is very quick and you can feel the 180 odd horses come alive. The 6 speed auto transmission shifts well and if you desire more fun then you have the option of shifting through the tip-tronic shift.  The steering feedback is hard and that’s perfect for a SUV this size to keep the driver always involved.

The New Captiva also features a new Eco mode as we had mentioned earlier, when you activate the Eco mode the system softens power delivery and restricts the revs through the gear shifts and in turn makes the drive a lot smoother and also enhances the fuel economy.

The New Captiva has lot things up its sleeve that it can boast of. The New Captiva looks brute and has a lot of aggression in its looks, the overall drive is a lot better and the new 2.2 litre VCDi engine with its extra power perfectly complements the New SUV. The New Captiva with its enhanced package offers a lot more and means serious business.

The new Captiva 2.2 AT AWD is available at a price of Rs. 24.59lakhs ex showroom Delhi.