Audi A4 is one of the bestselling sedans from the German car maker for the past 39 years. Initially sold as the ‘Audi 80’ and then as  A4 since 1994. The Audi 80 and the A4 have seen seven generations together and the company recently introduced the eight generation for the Indian market. 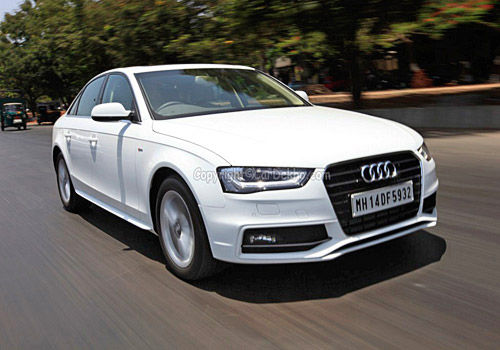 Audi has sold more than 10million A4 across the world and that should give you a fair idea of how popular the A4 really is around the globe. A lot has changed on the New Audi A4. We drive the New Audi A4 S-Line 1.8 TFSi to find out the facts and to bring you an extensive road test.

As mentioned the A4 is the best seller from Audi and the latest generation gets a much cleaner and distinctive design on the outside.  The current Audi A4 (code name B8) shares the platform with the Audi A5. The 2012 Audi A4  measures 4701mm in length and has an overall height of 1427mm while the sedan has a width of 1826mm making it one of the largest sedans in its class.

The front of the Audi A4 has the distinctive Bavarian Beard Audi grill that has grown larger and so has the 4 ring Audi monogram that’s placed on it. The Audi grill consists of chrome surrounds running on the edges and seven vertical slats in glossy black shade that defines the nose of the sedan. The front bumper now gets a bit sharper with the angular air dams with round fog lamps placed on that too are a bit larger than the ones on the outgoing A4.

A chrome strip runs across the air dam just below the fog lamps. The 2012 Audi A4 also get an all new set of headlamps. These new design headlamps have a wave LED pattern instead of the LED bulbs on the older A4.

This wave LED design headlamps are also seen on the soon to be launched Audi Q3. The 2012 Audi A4 gets the standard Xenon plus along with the day time running lights. The fresh looking headlamps give a very bold and fresh look to the A4s face.

The bonnet has smooth crease that flow back to the windshield. The side fenders and the door panels remain unchanged with a strong crease still running across the waistline. The wheel arches are flat and have a distinct soft curve on them.

The Audi A4 S-Line gets the classy looking five spoke alloys mounted on 255/50 R17 Michelin tires. The wing mirrors are of body color with integrated turn lights in LED. The chrome insert garnish also runs across the windows along with the blacked out pillars.

The rear profile on the 2012 Audi A4 also gets the new look with the tail lamps now in LED strips making it looks much more inline and flushed in the body panel. The Audi A4 comes with an electric sun/moon roof and a body colored fish tail radio antenna.

The exteriors of the 2012 Audi A4 look classy, the new nose job in the form of the reworked grill and the wave LED headlamps give a distinctive look to the sedan. The rear looks fresh with the LED strip tail lamps and the lower grill on the rear bumper along with the twin exhaust pipes. Build and paint quality is outstandingly as per Audi standards.

Audi has reworked the cabin of the 2012 A4, the dashboard is made of soft rubbery material and is in greyish brown shade. The 2012 Audi A4 gets the 4 spoke steering with all the multi-function control buttons mounted on it borrowed from the A6.

The instrument cluster retains the classy look with circular dials having chrome lining on them. The multi-function display unit in the middle reads out all the needed information that the driver needs. On the right of the instrument cluster is the ignition key port, you need to insert the key remote into the port and press the remote to start or stop the ignition of the vehicle.

The centre of the dash is taken by a colour display screen that displays the info for the MMI (Multi Media Interface) unit. You can browse through the radio channels or play music through an MP3 or audio CD or set the Audi Drive select settings using the screen and the MMI unit. Bluetooth connectivity and navigation and AC settings is also set through the MMI selection using the screen and the JOG dial on the centre console.

The MMI control buttons are now less confusing and easy to use as compared to the older A4. The double zone climate control works efficiently and cools the cabin instantly. The auto shifter is also borrowed from the elder sibling the A6.

The electro mechanical hand brake and auto hold buttons are placed on the right side of the auto shift leaver. You have the usual Park, Reverse, Neutral, Drive and Sport mode along with the tip-tronic shift that can be activated by sliding the shifter to the left side.

As mentioned the MMI control buttons are lesser in number now and hence less confusing to use as compared to the older A4. The knobs and buttons on the 2012 A4 have a certain amount of tic-tic feel to them when used giving them a made for ever build quality.

Wood insert around the shifter, door panels and on the dash give a rich and classy feel to the cabin. The center arm rest is adjustable for reach but height adjust is missed. Storage compartment and bottle/can holders along with mobile bins are nicely spread around the cabin.

The seats get light beige leather upholstery. The driver’s seat is fully electrically adjustable with three memory preset. The front seats offer good under thigh and back support and the multi adjust available on them help in perfectly setting up the seat angle and height for best comfort and visibility.

The rear seats are well contoured for comfort and come in 40-60 split folding.  Rear AC vents help in cooling the cabin with extra efficiency. You also get an electric rear sunblind and manual rear side window blinds on the 2012 Audi A4. Overall comfort level is high on the 2012 Audi A4. Attention to detail is high, the build quality in here is unmatched and the fit and finish is also typical Audi.

The 2012 Audi A4 comes with three engine options, two diesels and one petrol. The 1.8 TFSi Petrol, 2.0 TDi Diesel and 3.0 V6 TDi. We drove the 1.8 TFSi Petrol version and it churns out 170 PS of power between 3800 – 6200RPM and has 320NM of torque between 1400 – 3700RPM. This engine is mated to an 7 speed S-Tronic automatic gearbox. Start the engine pushing the car remote that you need to port in the slot. The engine idles with a smooth refined note. Shift to D mode to drive and off she goes. The pick up is near instant and the gear shifts are un-noticed.

The intelligent S –Tronic shift mechanism works efficiently and shifts gears smartly. The A4 comes with an electromechanical steering setup similar to the one on the Audi Q3, this system does not use engine power at all times and helps increase fuel efficiency. Audi claims a fuel efficiency figure of 15.4kmpl while we are sure that the 1.8 TFSi will return with real world mileage figures of close to 12kmpl.

The Power delivery is quick and the refinement level is high. Blip the throttle and you reach the three digit speed mark in under 9seconds. The steering feedback is crisp and the steering is tuned on the lighter side. We did wheel spins automatically many times during our drive due to the sheer power that was being delivered to the tyres from this powerful petrol engine.

The A4 drives rather well with sharp cornering abilities. The chaises are nicely tuned for taking some bends and corners. The suspension setup is tuned on the softer side and absorbs the bad roads and speed breakers rather well. What we sorely missed were paddle shifters on the steering wheel which would have enhanced the fun furthermore.

The 2012 Audi A4 feels stable and planted at all speeds and is a super fun car to drive around on highways and on traffic roads alike. We touched speeds of 195kmph on one stretch and the A4 drove very confidently. Braking is one area that the 2012 A4 came shining through. ABS with ESP and EBD work flawlessly and bring the A4 to a standstill without any hitch.

The Audi A4 was selling well until the Mercedes C Class got its facelift and its arch rival BMW 3 Series will also get its facelift soon. Audi had to prepone the 2012 A4 launch to counter its German rivals.

The 2012 Audi A4 looks classier and much better than the outgoing model thanks to the nose and tail job done.The interiors are also rather well done with new list of equipment level being added including the latest MMI Infotainment system.

The 2012 A4 is not a lot more exciting to drive and makes a handsome option in its segment. The Audi A4 1.8 TFSi sells at Rs. 27.33 lakh (ex-showroom Mumbai). The Mercedes C Class, BMW 3 Series and the Volo S60 are its main rivals in the price segment.