Since the time tubeless tyres arrived in India there has been constant debate if they’re better than tubed tyres, and if India is infrastructurally prepared for these. We’ve all used tubed tyres on our vehicles for the longest time, so it’s obvious there will be some apprehensions about tubeless tyres. Tubeless tyres also known as run-flat tyres or run-flats were initially available on luxury cars, but gradually Indian manufacturers also started introducing them on their high end models. There is a lot of fiction than fact about tubeless tyres Vs tubed tyres, and we at CarDekho.com will help you understand the difference between the two, which shall hopefully aid you in choosing the right tyre for your machine. 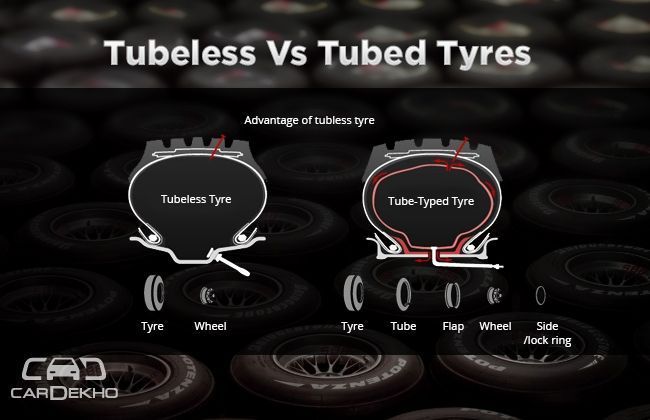 To start with, the wheel of your car comprises of three parts:

1. The wheel, which maybe an alloy rim or a steel rim
2. The tyre, which envelops the circumference of the wheel
3. The tube, which is present in the space between the rim and the tyre

What are tubed tyres?

Most tyres that you’ve used all these years are tubed tyres. These come with an inner tube which is filled with air. This tube forms a cushion between the rim and the tyre which also aids in absorbing some road shocks. The tube is an integral part of the tubed tyres, as it keeps the tyre inflated, lets the car roll smoothly and also helps maintain the life of the tyre. The tyre tube is made of a much thinner rubber than the tyre itself.

When a tubed tyre gets punctured, it’s the inner rubber tube that actually deflates and lets the air escape thereby causing a flat. This escape of air maybe gradual, but sometimes it can be sudden, especially when the car is in motion or at high speeds. The tube in a tubed tyre can also fail due to an incorrect fit, excessive friction or overheating. These may result in the tyre tube as well as the tyre bursting causing the driver to suddenly lose control of the vehicle; not a very pleasant experience. The other thing about tubed tyres is that once they’re punctured, you have to stop the vehicle immediately and fix it. If you don’t, you may end up damaging not only your tyre, but also the wheel rim, which can be a very expensive affair. Tubed tyres are relatively heavier than tubeless tyres.

The good thing about tubed tyres is that you can fix the damage on the tube and if need be even change the entire tube which is way cheaper than changing the complete tyre. Hence in a way tubed tyres are more cost efficient.

What are tubeless tyres?

A tubeless tyre as the name suggests does not have the inner tube. The tyre fits compactly on the wheel forming an air-tight casing and is then inflated via the valve which is placed on the wheel; so there is just an air cushion between the tyre and the wheel. When a tubeless tyre gets punctured the air is released gradually only from the point of puncture and hence the possibility of the driver losing control of the vehicle is decreased.  The side rims of tubeless tyres are reinforced enabling them to maintain shape and last longer. As result, one can drive a certain distance even after the tyre is punctured. Now when we say a certain distance, we’re referring to a maximum distance between 30 – 50 kms and that too at slow speeds. If one continues driving with a punctured tubeless tyre for a long distance it will inevitably get damaged, transferring this to the rim as well. In this case you will have to change the tyre, as well as the rim.

The fact that tubless tyres allow the car to be driven a certain distance, and don’t lead to sudden loss of vehicular control along with being light weight falls in their favour.

Both tubed and tubeless tyres are designed to tackle all terrains and which one to pick for your machine will eventually depend on you usage and preference.