Every new season of Formula 1 brings in new rules and regulations. Cars go through precise changes and tweaks to chop of as much lap times as possible within the boundaries of FIA standards. Key modifications are inclined towards engine performance and improved aerodynamics making cars faster than earlier. The new 2015 season will see faster cars than the 2014 season and improved driver skills as the constructors prepare. We look at some of these closely. 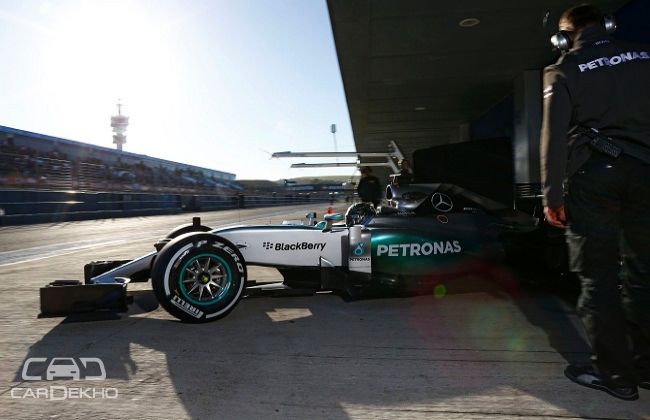 What are the new regulations for 2015?

Ferrari SF15-T the sixty first car built by the brand to race in the 2015 Formula 1 World Championship and the second turbocharged after the 2014 model. For the new season, Ferrari has lowered the front end subject to the new rules of 2015 season. A closer look at the rear notes a tighter package enabling more downforce to be extracted from the critical surfaces.

On the transmission side, choice of 8 forward gear ratios are fixed for the entire season once they are run in the first race. New 2015 regulations allow the weight of the SF15-T to increase by 11kg with respect to the previous car.

Starting with the nose, it remains mostly unchanged for 2015 but sits a tiny bit lower to comply with the new regulation. The theory behind is to keep the nose as short as possible, but with the main-plane of the wing as far forward as possible.

The nest difference is on the rear wing, which has moved to a central, single pylon configuration for structural and aerodynamic reasons. Also the external front suspension is an even more extreme version of the innovative concept introduced in 2014. Now comes the Power Units which faced cooling issues in 2014, subject to the charge air cooling, which was a significant new element. Now however in its second year of evolution, the objective was to find the best performance at the full range of temperatures experienced through a season.

In addition the 2015 tyres are around a kilo heavier than last year due to improvements to the rear construction, so the final weight limit is 702kg, an increase overall of 11kg.

The Red Bull team states that the 2015 car features a host of improvements across all areas. Changes across the body of the car are mostly insignificant. Only the front gets minor changes but it is under the skin where most of the improvements have been done.

With team relations going strong with partner Renault, engineers have worked closely with Renault team to yield closer integration between the Power Unit and the chassis.

Visually the nose section is now bigger in volume and lower to the ground following further changes to the technical regulations. Also the new design of the wheel rims now optimises airflow around the front wheels. The front suspension concept has changed little, with the springs and dampers again pushrod-actuated.

However, the engineers put a lot of effort into improving the feedback from the steering for the drivers. The development of the new Sauber C34-Ferrari has seen engineers focusing on three major areas, performance in slow corners, weight reduction and braking stability. With aerodynamics playing an important role, the team not only had to optimise downforce and drag, but also improve the balance of the car and its responses in particular through low-speed corners. The sidepods of the new Sauber C34, however, are now slimmer than those on the previous Sauber C33, despite higher cooling requirements from the new power unit.

The architecture of the now horizontal positioned radiators has been revised to provide flexibility to the cooling system. The rear section has gone on a diet thus aiding aerodynamic efficiency. In terms of weight, the car’s minimum weight has been increased in line with the FIA’s technical regulations, up from 691kg a year ago to 702kg now.

The FW36 showed a lot of development in the previous season, especially the nose of the car, making it faster as the season continued. With minimal changes in the rules for 2015, the team stays optimistic to continue its development streak for the new season.

The Mercedes-Benz PU106B Hybrid has a 6-cylinder 1.6 litre ICE spinning to a maximum of 15,000rpm. Felipe Massa stated, “The development rate of the FW36 was one of the most exciting elements to the car, the team worked exceptionally hard throughout the year to make sure that we had a faster car at each race, and I look forward to a similarly impressive car this year. I am excited to be continuing to work with Valtteri, a driver with so much talent who has so much to offer both the team and me as his teammate”.