I purchased the car on the 3rd day of its launch. Since then, it has been a quite up, and down journey with it. For, the first 3 months it was 'Fantastico'. The mileage was quite good i.e. 21 on the highways(mine was a petrol version) and 15-16 in the city. Strong build quality has always been a benchmark for tata, and these one crosses it with quite an ease. The thud sound which came when the door was closed assured of a solidly built structure. Overall, I was quite happy with it till then. Then came the second set of three months. Problems like increased engine noise, noises out of dashboard, and gear vibrations were way 2 much for me. After that I went for it's 2nd service . One and a half months after that, with a total of 9786 KMS in just 7 months and phewwwww......it's 'Fantastico' once again. 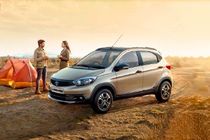