I booked my Kwid Climber AMT with Renault Mount Road owned by Khivraj Motors on March 13. Made the initial payment of 2lacs and I was told that the vehicle would be delivered by 15 days. Later they called and informed that the vehicle is undergoing some changes and Renault is implementing EBD due to which they will be manufactured by 4th April and can be delivered by 10 Apr. It didn't happen the way the dealer informed and I had to fight to get my vehicle in time. In vain, finally, the vehicle was handed over on 26th Apr with not all accessories they promised for which I had to go later to get the seat cover and other chrome sets done. They also charged 4000 rupees extra informing that their vehicle cost went up. With the bitter experience with the dealer, I took the vehicle. I liked the aesthetics and performance. In city, the mileage is around 8.5 km/land in a week's time, I went to my native which is 370 km from Chennai. I maintained an avg speed of 65 to 75 and tried up to 99. In the long route, the mileage was around 19.7kmpl. During the slow down and pick up, we can feel the geat change like manual vehicle which is a drawback. We have to accelerate by applying pressure on the pedal to move the vehicle which is not in case of any other vehicle. Overall the vehicle is good for a family of 4-5 ppl. The rear seat is little cramped compared to any other vehicle of this segment. This little bug is a good vehicle for the city where we can zip in the traffic and looks like an SUV in appearance. The infotainment with android auto and apple car play, rear view camera, and Bluetooth is an added advantage. This car also has a driver seat airbag and power window for the front door. This is a budget car for a middle-class family. 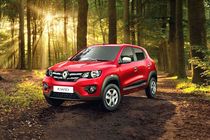