Renault Captur Will Reinvent The Brand In India

Renault Captur Will Reinvent The Brand In India

I saw the Renault Captur some years ago while browsing internet and was stuck by its sheer styling. Now I hear that the Captur SUV will be coming to India soon. Simply incredible. Trust me, this premium Renault car will become an instant hit. Just look at its massive appearance, it will be a head turner in the country. Besides the looks, the interiors appear very premium. I think they appear similar to the discontinued Renault Fluence sedan. From the details floating on the net, we'll be getting the Captur which already sells in Brazil. I believe Renault should offer the Captur with seven seat options as people here want more value for their money. Its engine and performance is also expected to be powerful as we have already seen them in the Duster. It would be better if Renault can work on the Captur mileage, as a car with good mileage has increased chances of being successful in India. I am guessing Captur price to be around Rs 10-12 lakhs.

Biggest problem is Renault vehicles are having poor resell value. If I want to upgrade then my Scala is not fetching the desire value. With this one can not change his mind immediately.

4.6/5
Based on144 User reviews
Write Your Review
Captur Reviews 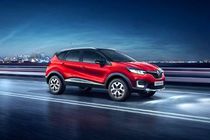