It would not be an exaggeration to say that the S-Class is a brand in itself. The car stands as the ultimate limousine luxury the money can buy. Recently, Mercedes unveiled the latest version of its S-Class Cabriolet at the Frankfurt Motor Show. The new 2-door Cabriolet takes its design cues from the S-Class featuring OLED taillights and chrome plated tailpipes at the rear with slight changes to the front bumper and new sills at the sides. Inside the cabin, you get a modernized infotainment system and revamped 12.3 inches instrument cluster. The car is also loaded with driver assisting technologies such as Distronic Cruise Control, Active Distance Control as well as Active Steering Function, all that have been part of the new S-Class sedan. In terms of power, the Cabriolet derives its energy from the 4.7 litre turbocharge V8 petrol engine that musters 453bhp and 700Nm of max torque. And with the 9-speed automatic transmission, the drop-top can sprint from 0-100kmph in just 6.4 seconds with the top speed of 250kmph. The most highlighted feature is the electronically foldable roof which opens/closes in 20 seconds upto the speed of 50kmph. Overall, the reworked S-Class Cabrio is a nailed-on superstar with well-engineered kits onboard.

5.0/5
Based on1 User reviews
Write Your Review
S-Class Cabriolet Reviews 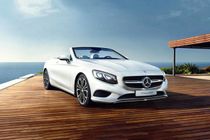