The Baleno is the new B+ segment hatchback from Maruti Suzuki. The compact car is positioned above the Swift in the Maruti Suzuki range, making it their most premium hatchback in India. Unveiled at the Frankfurt Motor Show in September 2015, the Baleno is a global product that is solely made in India for the domestic as well as global markets. Exterior The Baleno uses Suzuki's new liquid flow design philosophy to emphaise its exterior. The front of the car gets V-shaped grille, whose lines are extended all the way to the rear, first through the sweptback headlamps and then through the shoulder line. In photos, the design reminds us of the Swift with its similar bonnet size, but up close the car looks different and a lot more premium with LED DRLs, projector headlamps and chrome inserts. The side view is relatively simple. It gets a sloping rear but it does not make the car look sporty. The rear profile looks pretty with LED tail lamps and extra chrome. Overall, as intended the Baleno appears to be bigger and premium compared to the B-Segment cars. Interior The cabin looks refreshing with the new dashboard layout. The all-black interior is sporty and there are silver inserts for the dashboard and door trims. There is plenty of space in the cabin for five passengers, also the boot is large at 339 litres.Maruti is offering plenty of features with the Baleno. The top-end model gets touch-screen music system with navigation, rear parking camera and sensors, climate control, engine start-stop button and a detailed instrument cluster with a TFT screen. Also the safety features like ABS-EBD and the front airbags are standard across all variants. Engine and Performance The petrol versions of the Baleno are powered by the 1.2-litre K-Series VVT engine developing 83bhp and 115Nm of torque. The fuel efficiency of the engine is officially rated at 21.4kmpl and it is available with a choice of a five-speed manual or the CVT automatic transmission. The diesel engine is the same 1.3-litre multijet from the Swift producing 75bhp and 190Nm of torque. It uses the five-speed manual gearbox and has a claimed fuel efficiency of 27.39kmpl. The Baleno is based on an all-new platform and despite being bigger than the Swift in dimensions, the car is actually close to 100kg lighter. Variants and Competition The Baleno is available in four trims ? Sigma, Delta, Zeta and Alpha. The Sigma is the base level, while the Alpha variant is the top-spec with all the features. The CVT automatic transmission is available only with the Delta variant of the hatchback.Maruti Suzuki is offering the car in seven colours - ray blue, fire red, met premium silver, autumn orange, premium urban blue, pearl artic white and granite gray. The premium hatchback competes with the Honda Jazz and Hyundai Elite i20 in India.

4.5/5
Based on3015 User reviews
Write Your Review
Baleno Reviews 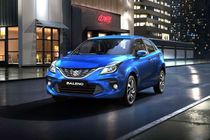 On Maruti Baleno :- Consumer offer up to R...