The Elite i20: Elite in every sense

The Elite i20: Elite in every sense

India witnessed the entry of a phenomenal hatchback in 2014, the Hyundai Elite i20. The car won the award of "Indian Car Of The Year" in 2015 because of all the reasons I'm going to list down in this review. The term "elite" is just the perfect term to describe the car. The i20 comes with a 1.2 Litre 4 cylinder petrol engine that churns out a healthy 84PS of power @6000rpm and 115Nm of torque @4000rpm. While the 1.4 Litre 4 cylinder diesel engine produces 90PS of power @4000rpm and 220Nm of torque @1500rpm. The petrol engine gives a mileage of 18.6 km/litre and the diesel engine gives a mileage of 22.54 km/litre (ARAI approved). The car comes in 4 variants namely Era, Magna, Sportz and Asta ranging from Rs. 5.81-Rs. 9.83 Lakhs. The model I bought in 2015 was the Diesel variant of the Magna and i was overwhelmed to drive such a smooth Diesel car loaded with decent features for just Rs. 8 Lakhs (on-road, Mumbai). Let's talk about the reasons to buy this car and what made the i20 win the ICOTY title. The aggressive look of the car makes it sporty from every angle. Compare it with other hatchbacks and the i20 looks completely outstanding from the rest. The interior comes with a combination of black and beige which makes the car look very pleasant from the inside. Additionally, the blue interior lights give an amazing feel while driving at night. The legroom is decent but it can be a little uneasy for 3 people to sit on the rear seats. The audio system of the car is very fine which comes with USB, aux and bluetooth connectivity facility. Moreover, the multifunction steering wheel makes it very convenient for the driver to manage the music. Talking about the ride quality, the diesel engine is very quick and responsive. The car speeds up at an instance and is very much stable even at speeds of 140 kmph. The steering wheel feels very light and makes it easy for one to drive through sharp turns, traffic and narrow lanes. The brakes were not too late but not very responsive either. The reason being lack of ABS. The NVH(Noise, Vibration and Harshness) levels of the Elite i20 have been very well refined as compared to the older i20. The six gear manual transmission makes the car able to run at higher speeds with very less noise. In fact, at the price of just Rs.8 Lakhs, it was very surprising for me to see a diesel car with such a less amount of noise. That has been the best part about the i20, a powerful diesel engine that keeps your ears away from the engine noise. Another plus point of the car is the reasonable service costs which is Rs1700(approx.) Thanks to Team Hyundai. Coming to the points where the Elite i20 was a disappointment. The biggest drawback of the i20 is the uncomfortable seats. The seats are so wrongly placed that every time I go for a one hour drive, I return home with a bad backache. Secondly, whenever I drive the car from even the small potholes, the car reacts a lot making the whole cabin bumpy. At this date, the biggest competition that the i20 faces is the Maruti Suzuki Baleno. The 2 main advantages that the Baleno gets over the i20 are the better ride comfort and the average. But the i20 outruns the Baleno when it comes to the engine power. The verdict-The i20, with its aggressively sporty looks, phenomenal engine and a list of features loaded inside is definitely the perfect package worth spending your money on. 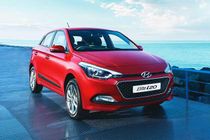