Datsun was the only carmaker who gave the taste of affordable estate car to the Indian car buyers. The GO Plus was launched in 2014 and initially, it evoked the interest of the buyers before gradually fading away from the hearts. Datsun has realized this and collected valuable feedback to give another shot in this segment. Now, the carmaker has launched the updated version of the MPV which better looks, more features and updated safety measures without making major changes to the pricing. I have a family of six including my parents and two small children. I was looking after a 6-7 seater car within the price range of Rs. 5-6 lakhs. I knew about the Datsun GO Plus earlier but didn't pay heed to it since it wasn?t interesting at that time and also I didn't have the plan to buy a car at that time. Moreover, many people have also told me that it's after sales service is pathetic. But call it a coincidence or not, just recently when the updated version was launched in the market, it really raised many eyebrows in the auto world. I was too impressed as of how the company has managed to add to the feature list without compromising on the pricing. Without wasting time I chose the top end variant. The most amazing thing about this new model is the safety for which it was highly panned by the critics as it scored zero stars in the crash test. The new Datsun GO Plus now gets dual airbags, ABS with EBD and rear parking sensors as standard. This is really a significant step as there is an increase in the safety concerns in India. There is also some visual makeover while the interiors have been heavily worked as well. The car gets LED DRLs, 14-inch alloy wheels and a new orange color which I also chose. In terms of interiors, the dashboard has been redesigned which now features a large glove compartment which was missing in the previous version. The main highlight of the interiors is the 7-inch touchscreen infotainment unit which is compatible with Android Auto and Apple CarPlay. The car now also gets electric adjustability for the ORVMs and power windows for all the four doors. I am really satisfied with the changes the carmaker has done in the latest model. It's just 2 weeks of driving this car and I am really enjoying. The value for money quotient has been upped by several notches. Well done Datsun. 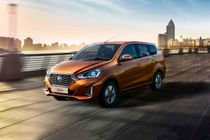 Compare Variants of Datsun GO Plus

User Reviews on GO Plus Alternatives