Published On Oct 17, 2012 By Rahul for Tata Safari Storme

The concept of SUV has been successful in India, as people like their cars big and bulky. The bigger, the better is what the thinking goes. Also, with no traffic discipline, might has been right. So, the love for buying SUVs in India has seen a hike, as this makes easy bullying apart from the space it offers. 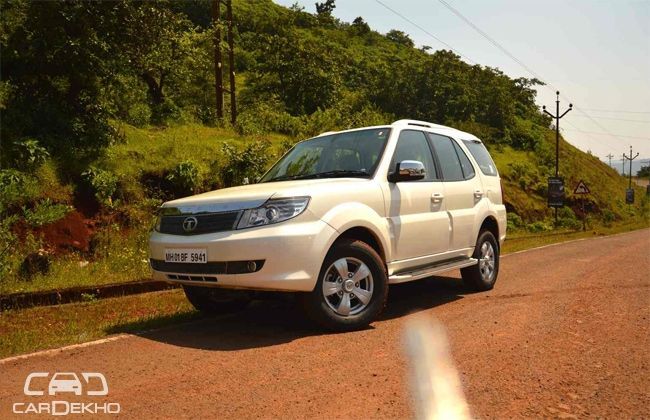 Tata Motors was the first manufacturer to introduce an SUV— back in 1991— called as the Sierra. This was followed by the Sumo and the Safari. Apparently, the Sierra’s life cycle ended, but the Safari still lingers. Now, what we see is the new Safari Storme. This is the fourth upgrade on the SUV, and the most major one as well.

As Tata launches the new Safari Storme, we drive around to find out the difference. Read further to find out more on the Storme.

The exterior design of the Safari Storme isn’t where major changes have occurred. Storme gets a new hood, and front grille with a chrome strip. This strip has Storme embossed on it. Headlamps meld well with the grille, making the front look aggressive. The fascia somewhat resembles that Range Rover.

The silhouette of the Storme is exactly the same as the Safari. However, it gets chrome plated outside rear view mirrors, in the higher models. Indians love chrome and Tata has given them what is generally asked for. The real end has received a major upgrade as the tyre is now moved below. Apart from this there are no changes on the outside.

The interiors look similar to the older Safari, but the changes are multiple. You instantly feel the insulation, the moment you step inside the car and shut the door.

There is no thud melodrama and even the heavy door of the old Safari is now lighter in weight, but of good quality and makes you feel insulated from the world.

The interior quality is much of a leap forward over the existing Safari and even the feel is better. The new instrument cluster seems to be derived from the previous one, to retain similarity. Storme gets new rotary AC dials and music system. Also, there are electrically foldable mirrors and even ABS comes as standard across all Storme models.

The 2.2-litre engine from the Aria also powers the new Storme. So, the VARiCOR engine has now replaced the 2.2-litre DiCOR. This engine is much more refined and has very low NVH levels. Even though, the insulation for the interior is enhanced, even the refinement has been notched higher. The power delivery is more linear and even the drivability is even better. There is no clatter from the diesel and the engine does feel stressed when revved closer to redline. Neither does the harass sound intrude into the cabin.

We didn’t drive it on traffic prone roads, but it doesn’t seem to have issues for overtaking. Plant your right foot and the engine will propel away, as even the throttle response has been improved. Storme is a massive bound over the previous Safari.

The Safari had the G76 gearbox. Now, it gets the MkII version that is more refined and less notchy. Tata changed the gear ratios, which has drastically improved the drivability of the Safari. The engagement is smoother and easier also. Even when lugged into a higher gear, you do not necessarily have to downshift. You can potter around the city in the same gear.

The biggest change on the Storme is its platform. It now shares the X2 platform with the Aria. The hydroform chassis improves the rigidity and also cuts the flab. This has made a tremendous difference on the ride and handling characteristics of the Storme. Safari always had a good ride and the Storme is no different.

The ride is plusher as the tyres absorb most of the jolts and bounces. Driving even on broken tarmac doesn’t affect the ride of the occupants. The suspension irons out these shocks.

The Safari was a good handler, when compared to competition but it still had loads of body roll. Now, that problem has been well taken care. Though we couldn’t push the Storme to its limits, but there has been a reduction in its body roll. Its behaviour didn’t make it feel like the Safari.

The new platform has done the trick for Tata. The alacrity of this chassis has helped and even the perky engine will make more fun to drive. The road holding of the Safari was good and we hope assume the same has been retained, as we didn’t get to drive the car in speeds excess of 80km/hr.

Another improvement on the Storme is the turning radius. It now has a radius of 5.4m, making it the best in its class. This is one of the major complaints that Safari owners had. So, now manoeuvring on busy streets much easier and very convenient also.

If you are looking for a no non-sense, off-roading capable and spacious SUV then the Safari Storme is the ideal pick. If you need more bells and whistles and a good handling SUV, then you will have to spend a lot as nothing even in the segment above will fulfil your requirements.