Skoda’s big bear seems relatively unchanged on the surface. But it packs in a new, more likeable personality. 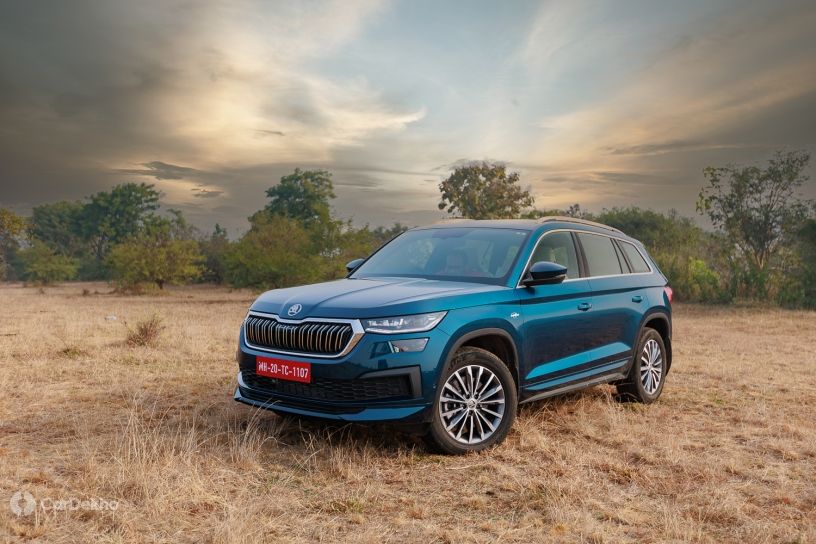 Skoda’s flagship SUV is back after a near two-year hiatus. With a little nip and tuck on the outside, a larger feature list and a brand new turbo-petrol engine, the Kodiaq’s comeback seems well thought out. And while updates/facelifts usually bring a new set of questions with them, the Kodiaq simply cements old, solid reasons for bringing one home.

Even by facelift standards, updates to the Kodiaq are subtle at best. Most will continue to find it more estate-like than outright SUV, but the design by itself is quite likeable. There’s no unnecessary drama (even if you pick the flashier Sportline trim), just a set of taut bodylines that’s sure to age gracefully.

The Kodiaq’s face now appears friendlier, with the headlamps being a touch more angular and the grille upright. There’s a new bumper too, but we’d be surprised if you could spot the difference immediately. Other updates include new designs for the 18-inch alloy wheels, and new tail lamps. The tail lamps also get dynamic turn indicators and a cool light animation when you unlock the car.

If you’ve liked the way the Kodiaq looked earlier, chances are the facelift will appeal to you too. There’s not a lot that’s changed, but the new elements do enough to give the Kodiaq a fresh look.

Compared to the already miniscule changes on the outside, the Kodiaq’s interiors are practically unchanged. That’s to say quality levels continue to be a highlight, with plenty of soft touch materials on the dashboard, door pads and elbow rests. The only new design element here is the two-spoke steering wheel in the Style and L&K trims.

The layout remains straightforward and easy to get used to, and the beige-black theme is stately too. Quick word of caution though — the beige leather is way too easy to soil, and the piano black appliques on the dashboard are scratch/dust magnets. The cabin does feel posh, save for a few cheap-feeling bits like the power window switches, and the circular dials for the climate control that feel hard and plasticky.

Then there’s some weird odd cost-cutting involved. For example, you get a dimming function only on the driver’s mirror, and while both front doors have slots for umbrellas — there’s just one umbrella (the Superb gets two!).

Additions come solely in the form of new features. This includes a 12-speaker Canton audio system (two more speakers than the old model), wireless Android Auto and Apple CarPlay, a wireless charger, and 10 colours for the ambient lighting. It’s appreciable that all these new features are available as standard across the range. Other standard features include three-zone climate control, a panoramic sunroof, powered driver and co-driver seats with memory and a powered tailgate. The range-topping L&K variant too gets new goodies such as heated and cooled front seats and a 360° camera.

Infotainment duties are split between an 8-inch touchscreen (Skoda’s missed a trick by not offering the larger 9.2-inch screen here) and a 10.25-inch digital instrument cluster (available in the Sportline and L&K trims). Both screens are high-res, easy to read and operate. We do wish the virtual cockpit did a little more though — say change themes based on the drive modes, or relay navigation via Google Maps. Sadly, functionality is limited.

Absolutely nothing changes on the space front either. The Kodiaq has appeal as a chauffeur driven SUV, and even six-footers will be comfortable in the second row. If the Kodiaq is supposed to be your extended family’s road trip companion, bear in mind that the third row is best suited to kids. The lack of kneeroom and underthigh support is sure to bug adults even over short journeys.

Skoda is offering 9 airbags, ABS with EBD, electronic stability control and a host of other safety tech as standard. This includes multi-collision braking, anti-slip regulation and hill hold. Exclusive to the top-spec L&K variant are features such as hill descent control and a tyre pressure monitoring system.

Global models of the Kodiaq get a suite of ADAS tech including lane keep assist, rear cross traffic alert and blind spot detection, all of which are sadly missing in the Indian model.

Replacing the tried-and-tested 2.0-litre TDI diesel engine is a new 2.0-litre turbo-petrol motor. We aren’t entirely unfamiliar with this engine though — we’ve experienced it with the Superb, Octavia as well as the Volkswagen Tiguan. On paper, there’s a gain of around 40 horsepower compared to the outgoing diesel, and a 20Nm drop in torque. Enough to make a difference in the way the Kodiaq moves?

Oh yes. While the diesel’s power output felt just adequate for the Kodiaq’s heft, the petrol feels better. It isn’t exhilarating or exciting in any manner, but it does enough to keep the driver involved. More than performance, it’s the engine’s refinement that impresses. The motor is dead silent and lets out a raspy cackle only when you push it to the redline. Pair this with some seriously robust insulation and the Kodiaq delivers near-electric car levels of silence at commuting speeds.

Performance is effortless. It doesn’t feel as urgent as Skoda’s claimed 0-100kmph time of 7.3 seconds suggests. That said, you don’t have to second guess your overtakes like you had to with the diesel Kodiaq either. There’s ample power and the quick and smooth 7-speed DSG ensures you tap into it whenever you need to. Much like the Tiguan we sampled, the Kodiaq too feels at home munching kilometres on the expressway.

We expected fuel efficiency to be a major stumbling block for the Kodiaq TSi. Claimed fuel efficiency stands at 12.78kmpl, as opposed to 16.25kmpl on the diesel. Moreover, unlike the 1.5-litre TSI engines on the Kushaq/T-Roc/Taigun, this engine does not get cylinder deactivation tech to help with fuel efficiency. Nonetheless, efficiency hovered around the 10kmpl mark on our two day stint with the Kodiaq — which should be just about acceptable for most. Do note that pushing this motor hard will most certainly have you staring at single-digit efficiency numbers. This will be the sole downside (if at all) for this drivetrain.

Alongside the Tiguan, the Kodiaq has the most sedan-like driving manners. On fast and smooth highways, the Kodiaq’s stability and poise is impressive. At the same time, it seems adept at tackling broken roads without disturbing the cabin too much.

Skoda has added dynamic chassis control to the Kodiaq’s kitty. This means the suspension now changes character based on the drive mode you’re in. There’s Normal, Comfort and Sport to choose from. While there’s very little separating Normal and Comfort, you do feel the suspension firm up in Sport. We don’t see you using this mode very often on your daily drives, but it does feel rewarding on those fast highway/hill runs.

Unlike traditional body-on-frame SUVs like the Fortuner and Gloster, the Kodiaq is far far more at ease tackling the twisties. It manages to mask its size well and almost eggs you on to push a little more through the bends. With an accurate steering and body roll that’s well-controlled it’s quite easy to build up the confidence to do so too.

Skoda’s Kodiaq hasn’t changed dramatically with the update. In our books, that’s no bad thing. Sure, Skoda shouldn’t have skipped out on ADAS tech, and as a family mover the Kodiaq is still a 5+2, not a true-blue seven seater. But, it continues to be a classy looker, has a sophisticated cabin and is loaded with all the feel-good features you want at this price point. The new 2.0-litre TSI motor amps up its desirability quotient for those who want to spend more time behind the wheel.