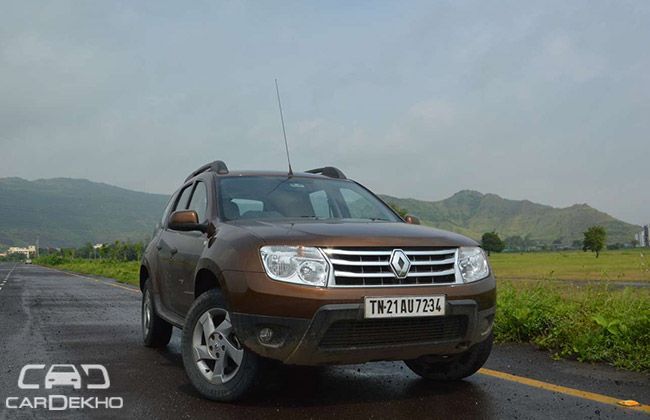 We have recently developed a liking for compact SUV. They have high seating, good ground clearance and comfortable ride. To top it up, even the drive is like a sedan. This makes it a perfect recipe for a great city car. Pot holes are dealt by the large rubbery tyres and the mighty suspension, making the ride a joy. To understand how compact SUVs perform in a long run, we asked Renault to give us the Duster for a while so we could test this compact SUV. This is the first SUV that made its way into our long term garage fleet. Read our two reports on this compact SUV.

The Renault Duster we asked for was the 83bhp, five-speed manual. We wanted this version as we had more of city driving and the fact that everyone has been driving the more powerful variant.

This is the same 1.5-litre oil burner that produces about 83bhp of power and is mated to a five-speed transmission than six. Now, this might sound that the engine has lesser power, but in reality the power produced is sufficient for city driving. Due to the difference in gear ratios, the turbo lag is much lesser on the 83bhp and it is a lot more drivable than the 108bhp in the city. More torque is produced at lower engine speeds despite the fact that the 83bhp has fixed geometry turbo.

The engine’s NVH levels could have been better as the diesel clatter is a bit too loud, on the inside though the insulation avoids much intrusion of the sound into the cabin. During cold starts, there is a wee bit more clatter melodrama than one would like, however it settles down as the engine warms up. The clatter is prominent while idling.

Driving in city is easy, as the clutch and steering wheel are light and even the gear shifts are smooth and slick.  The six-speed manual felt a bit rubbery, but this five-speed is much better. The torque produced is sufficient, and you do not feel the need to shift gears, especially in traffic.

With more of city highway driving, the Duster mileage figure returned, was of about 17km/l. This is over a wider period and after driving for about 1500-2000kms. This was driving with a light foot and gradual acceleration, with no surge with quick acceleration. Overtaking was never an issue with the Duster, and most of the times there isn’t even a need to downshift. The torque spread and the gearing of this compact SUV is good enough.

The interiors of the Duster 83bhp aren’t much different from the top-of-the-line, except for some lesser features. One advantage of the 85bhp is that there is no rear AC vent, which means more space for the middle passenger in the second row. The large vent makes it tighter for three people to sit. The seats have half artificial leather and half fabric covers, than the full leather as the RxZ has. The 83bhp comes with the option of touch screen that has music, Bluetooth and even navigation.

The usage of this system is much easier than the conventional in-dash music system, and it even has controls on the steering column like the other variants. However, one has to put in the pairing code everyone one needs to connect the same Bluetooth device. The infotainment system also has.

The visibility in the Duster is good too and one has complete visibility of the road.  The boot is large enough to gobble luggage for a weekend trip. We don’t like the outside door handles, and we wish they were grab door handles. The location of adjusting the electric ORVMs is also under the hand brake, and even the power window switches are placed a bit ahead than what we would have wanted.

The other thing we like about the compact SUV is the suspension that gives a comfortable ride. We took it off the road, not hardcore off-roading, but some soft roading and the result was good. We shall miss the Renault Duster, sorely.