Published On May 12, 2014 By Rahul for Mercedes-Benz GL-Class

Mercedes-Benz has introduced the most powerful SUV for the Indian car market. The new-generation GL-Class has already been a runaway success for the company, and now it is gets the performance edition of this seven-seater SUV. We have got our hands on the Range Rover Sport 5.0-litr previously and its performance was staggering. Now we get our hands on the GL 63 AMG and try out how good it is. 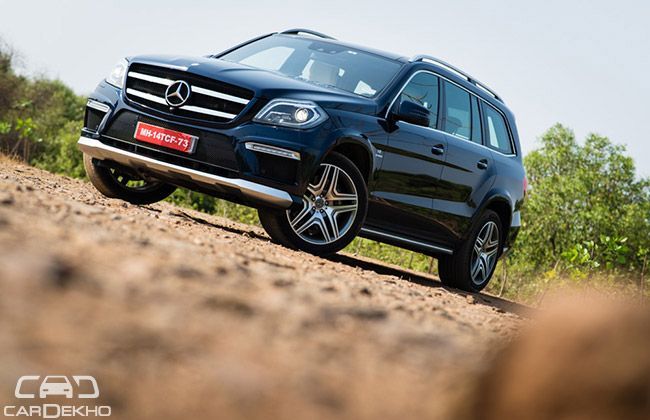 The GL 63 AMG retains its body styling of the GL-Class. However the styling has been souped-up to match with the AMG standards. Of course to begin with, it gets the V8 bi-turbo badging, quad-pipe exhausts, diffuser-styling at the front and rear, air scoops in the bonnet, stylish alloy wheel and of course the AMG badging.

The fascia of the GL 63 AMG looks beefed-up due to the larger front grille, however the headlamps are the same with the LED strakes similar to the existing Mercedes-Benz styling. The AMG section is officially owned by Mercedes-Benz owned division and brand new products are rolling out from this section. First came the SLS AMG, now we await the AMG GT.

The rear bumper gets vents and even some chrome finish on the front and rear diffuser. There is also a spoiler at the back of the GL 63 and a chrome strip on the Day-Light Opening. Chrome rails run across the roof of the GL 63 AMG as well.

The quality of materials used is also better than the GL-Class, though the latter has great quality of materials used. It comes embellished with several brownies like cooling and warming cup holders, seat AC and warmers, 360 camera for parking and the list just goes on. There is sufficient space in the first two rows, the third row however is tight and good for kids. The last two rows of seats can be folded and the last is folded electrically. The middle row has manual folding. The boot has sufficient space and when you fold the two rows, it forms a flat floor.

GL-Class for India is the GL350 CDI, which gets a 3.0-litre V6 diesel engine, the GL 63 AMG gets a 5.5-litre V8 bi-turbo petrol engine that produces 557bhp of power and 760Nm of peak torque. This powerhouse produces immense power and the turbo lag can't be felt. Despite downsize of the engine, the push produced by this V8 engine is colossal. Crank the engine and the V8 engine growls through its quad-pipes. The AMG exhaust note is tweaked to be a bit louder than other models.

The GL 63 AMG doesn't need any downshifts for overtaking in the city or the highway. It comes mated to a seven-speed self-shifting transmission. With this kind of power under the hood, it doesn't matter how quickly your transmission shifts. The upshifts are smooth and there isn't much of a lag even you when want it to downshift. There are three modes in this SUV, comfort, sport and manual. The comfort is where everything is relaxed for normal daily driving, in sport the throttle response improves, the shifts are closer to the redline and in the manual, well there are no shifts until you upshift or engage into a lower gear with the paddles.

The GL 63 is an AMG, it can be driven around a track with good handling, yet its ride quality is supple. It doesn't feel stiff and the ride quality isn't bad even on rough roads. The suspension does a great job as the irons out most of the road shocks and jolts even on uneven surfaces and at high speeds also. There isn't much of a difference between the regular GL and the GL 63 AMG in the ride.

The handling of the GL 63, is well like any other AMG. Not much of body roll despite the dimensions and good feedback from the steering wheel also. The suspension can be raised and lowered for different kinds of driving. The brakes are also good and even the feel of the pedal isn't spongy. The suspension can also be adjusted in comfort and sport mode. It stiffens a bit in the sport mode and even the body roll is less and response from the throttle and transmission is better. The downshifts are a tad harsh, while the comfort mode it is very relaxed and a comfortable drive.