We praised the new Maruti Suzuki Swift for bringing back some excitement to a segment that’s become all about value and practicality. Will this excitement manage to distance itself from the almost joint segment-leader, the Hyundai Grand i10? 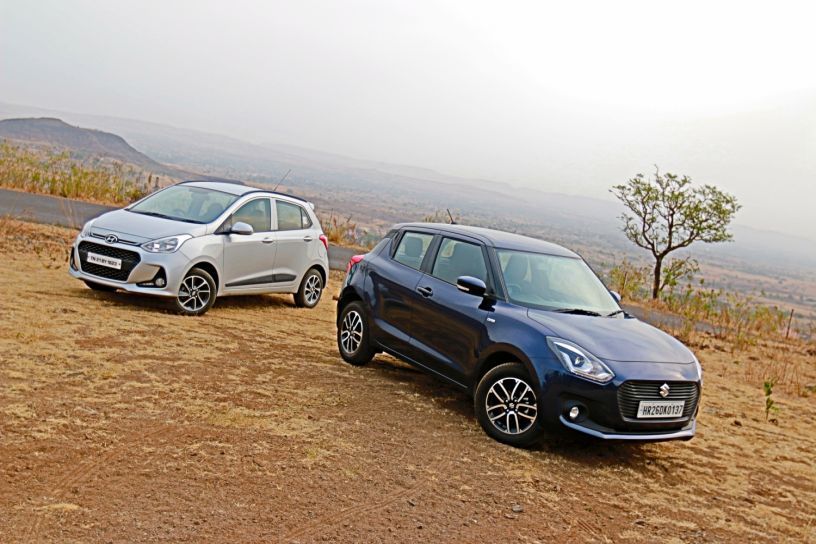 When Maruti launched the Dzire before the new Swift, we did get a slight hint of what was coming soon. When we finally drove the new Swift early this year, though, we were pleasantly surprised. The new car brought back the enthusiast angle to the driving experience that was missing from the segment for a while. While the outgoing car was still the leader in the segment, the Grand i10 has been a very close contender to its throne, snapping at the Swift’s heels in terms of monthly sales. In fact, in recent months the Grand i10 has been matching the Swift on many occasions and, at times, even bettering the sales figures of the outgoing Swift. We spent a week driving both the contenders to see if it really is such a close competition.

In appearance, the two are quite distinct from each other, with the Grand i10 looking a little smaller than the Swift. The Grand looks cute and even a midlife facelift, little over a year ago, hasn’t managed to knock the cuteness out of it, but that’s not a bad thing. The softened edges of this iteration of Hyundai’s Fluidic design language are quite pleasing to the eye. But the Grand i10 is also five years old now and with a number of them on the streets, its looks have become all too familiar. In this top-spec Asta (o) variant, it sports daytime running lights which accent the fog lamps. The Swift also sports DRLs, but these accent a more modern pair of all LED headlamps with projectors.

The Swift looks a little familiar now and by launching the Dzire before the hatchback, Maruti has dimmed the sheen of looking at a brand new product, just a little. That said, the Swift still holds more presence over the Grand i10 when viewed side by side. The large, single grill up front and flared wheel arches give it a distinct, sporty look. It’s also a very clean design, undoubtedly helped by moving the passenger door handles up into the window quarter glass space. And while this is visually a positive, it’s not good news but we’ll get to that later.

The New Swift is based on Maruti Suzuki’s new Heartect platform that is lighter and more rigid for safety and performance. It’s also wider and longer than the Grand i10 which no doubt gives it that more commanding road presence over the Hyundai.

It’s all good being the bigger car on the road, but let’s take a look at how these two cars have been packaged on the inside. True to the tale of the tape measure on the outside, the Swift is the wider car on the inside as well. While we can’t really say that either cars are five seaters, three people will squeeze more easily into the Swift than in the Grand i10. The Swift is quite simply the wider car on the inside too, but that’s about where the advantage ends. Despite being longer and sitting on a longer wheelbase, the Swift doesn't offer four occupants much more legroom than the Grand i10. In fact, in terms of rear and front adjustability ranges, the Hyundai actually offers more legroom for all occupants.

The Grand i10 further emphasises this space with its lower shoulder line and bigger glass area in the rear. The Swift’s higher shoulder line does not help, especially with the rear window quarter panel being blanked out by the door handle. This combines with the rather large headrests, both front and back, that further block the view outside. This also affects the driver of the Swift as the view out of the IRVM is obstructed by the rear head rests and the rear three-fourth vision (used when merging into a lane or pulling out onto a main road on the left side) is also hampered with the rear door handle and the left front passenger head rest coming in the way.

The Grand i10 also, ever so slightly, takes the edge when it comes to the fit and finish of its interiors and switches which feel a little better put together than the Maruti Suzuki. Even the storage areas and spaces are a little better designed and thought out. Simple things like all four doors taking litre-sized bottles (the Swift’s rear doors will hold only 500ml or smaller) make a difference on long drives. Another big miss by Maruti is the strange omission of rear air con vents (present in the Dzire) which the Grand i10 gets in addition to a 12v charging socket. So, as far as the interior space and quality goes, it’s the Grand that gets the nod, unless travelling in a pack of five ranks very high on your priority list.

When it comes to creature comforts, both of these are fairly neck and neck. They both offer a smart key with push-button start, climate control AC, steering-mounted audio and phone controls and a 7.0-inch touchscreen infotainment system with Android Auto, Apple CarPlay and MirrorLink. The Swift does have the better light setup with auto headlamps and LED projector headlights which really do outshine the Hyundai during night driving. The Hyundai pulls one back with the infotainment system that is much easier to learn and operate on the move too with a better designed interface and functionality. It, also, is better placed than the Swift’s unit which catches the glare of the sun during the day making it harder to read.

The Maruti Suzuki Swift takes a step ahead of the Grand i10 out on the open road when it comes to performance. Even though their engine numbers are nearly identical on paper, the four-cylinder, 1.3-litre DDiS in the Maruti is the more spirited performer. When it comes to outright speed and acceleration, it’s almost a second quicker to 100kmph than the Grand i10’s 1.2-litre three-cylinder motor. The Grand does manage to catch up slightly though, and in the quarter-mile sprint (400 meters), the Grand i10 reduces the gap to less than half a second. The Swift’s also geared quite tall and this shows in the fuel efficiency figures, with the Swift posting an incredible 27.38kmpl on the highway fuel efficiency test, compared to the Grand i10’s 22.19kmpl.

The Grand i10 comes to its own in the city, though, and its shorter gearing means that you can carry a higher gear than the Swift and this allows it to close the efficient Swift. It posted 19.1kmpl as opposed to the Swift’s 19.74kmpl in our city efficiency tests. The Grand i10’s torquey three-cylinder engine combined with that shorter gearing means that it’s the easier car to drive around town requiring fewer gearshifts and pulling more easily from lower engine speeds than the Swift. This also shows up in our roll-on tests with the Swift responding 0.6s slower in the sprint from 30kmph to 80kmph in third gear.

The Grand i10’s suspension has been tuned for urban comfort and hence, around town, it’s a little better than the Swift at absorbing road imperfections and also better at tackling broken surfaces at speeds of up to 40kmph. The steering, clutch and gear shift of the Grand i10 are much lighter in operation than the Swift, which really makes it effortless to drive around in town. The Grand i10’s softer suspension, on the other hand, starts complaining about the roll much earlier and is more suited to relaxed highway cruising.

On the handling front too, this follows through with the Swift easily the more fun car to drive fast through a set of corners. The steering weighs up nicely and though it doesn't offer much feeling as to what the front wheels are doing, its flows very fluidly around corners.

When it comes to the two top-end models we have on test, the safety features are quite comparable. They both get dual front airbags and ABS, but only the Swift gets them as standard across the range in addition to ISOFIX child seat mounts, also as standard. The Grand i10 gets dual airbags in only the top three variants, while the Era and the Magna only make do with driver’s side airbags. The Era and the Magna also miss out on ABS. So, the Swift is clearly the winner when it comes to safety equipment compared to the older Grand i10.

The Hyundai Grand i10 is a great car in the city, its interiors will transport carry passengers around town and on occasional longer trips more comfortably. The Maruti Suzuki Swift is a much nicer car out on the open road where it can stretch its legs a bit and you can take advantage of its superior mileage. It’s a lot more fun to drive spiritedly and it certainly does inject some excitement in a rather bland segment. But the Swift does come at a bit of a premium and between these two top-end variants, the Swift is Rs 82,000 more expensive.

While both cars have their pluses, we can't say that either deserves to lose, so this is what it boils down to. If you are looking at a sensible practical car around town that’s efficient and comfortable, the Grand i10 is the choice to make. If you do a lot of weekend trips or just drive higher miles every day, then the Swift will pull at your heartstrings because it’s fun to drive and may be worth stretching your budget a little.

Check out: Compact Sedan Comparison: Dzire vs Xcent vs Tigor vs Ameo vs Aspire