Published On Mar 08, 2013 By Rahul for Mahindra Scorpio 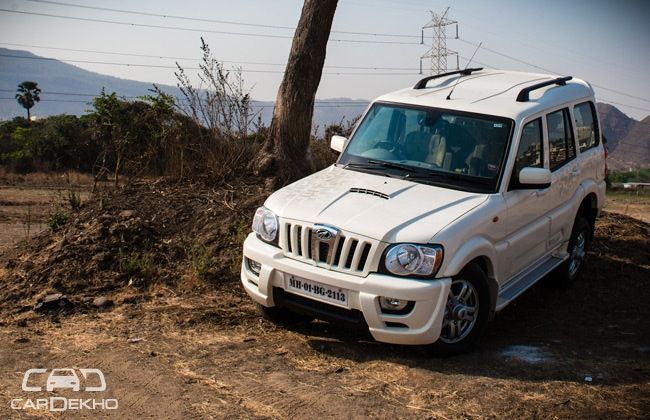 The Scorpio has been one of the biggest success stories for the Mahindra automotive division and the company is still riding on it.

The Scorpio is more than a decade old design and Mahindra has been continuously making changes to the vehicle. With the high demand of SUVs in the market, several of our readers had put in requests to do a review on the latest version of the Scorpio. Hence, there is our report on the Mahindra’s Scorpio.

We all are familiar with the design of the Scorpio and we need no special introduction on how does it look. Mahindra has been reviving the design by making certain changes on the vehicle every once in a while to enhance its styling and avoid it from ageing.

The Scorpio today comes with the standard Mahindra front grille with the company’s logo surrounded by a vertical chrome slat. The headlamp design has been tweaked to make it muscular and more appealing than before. The silhouette is fairly untouched and the only new recent addition has been the mHawk badge on the driver’s side. Mahindra also offers a special vinyl on the top-of-the-line Vlx model.

The instrument panel of the Scorpio is simple and has a fairly basic layout. Being more a decade old, it does show up. However, most of the Scorpio competition has the similar design, which doesn’t make the Scorpio look old.

The fit and finish is decent, however it is the feel of the materials that didn’t impress us.

The space in the front row is decent, as we six footers were comfortable without any issues. However, the seat could have been a bit larger for better thigh support.

The rear seat knee room is tight for tall people, while the comfort on the seat is decent. The last row jump seats have good space.

As an overall, the cabin of the Scorpio is well insulated, as the outside engine and other noises do not intrude into the cabin— making it feel sophisticated.

Also, the air-conditioning is powerful to reduce the cabin temperature even the scorching Mumbai heat.

It gets a lot of frills like in-dash music system with USB and aux, cruise control, steering mounted audio, Bluetooth connectivity. It is the location of power window switches that are oddly placed.

The Scorpio now has two engine variants, one being a 2.2-litre mHawk and the second being 2.5-litre m2Di. The latter being a Bharat-Stage III engine isn’t available in major cities. The 2.2-litre that we drove, is an all-aluminium engine block that is lighter than the regular cast iron block and these four cylinders together churn out a total of 120 horsepower and deliver a maximum torque of 290Nm.

The NVH (noise, vibration and harshness) of this engine is decent, and the engine has a strong mid-range. The engine screams once passed 3000rpm. There is a bit of turbo lag, but the punch once the turbocharger kicks in is pretty prominent. One of the best bits of the mHawk is its drivability and this is one of the reasons why Scorpio drivers love their SUV. The only downside of the Scorpio’s power train is its transmission. The long gearknob takes sometime to get smitten to, and also the shifts are rubbery with long throws. Else, we like every bit of the powertrain, especially the refinement.

The Scorpio’s biggest USP is its driving dynamics. It drives just like a hatchback and you even sit higher in a command position, which is what most of the Indians like. The Scorpio’ ride is decent, however it is on the softer side and also long suspension travel. The ride is smooth and composed on smooth tarmac and doesn’t even feel bouncy at high speeds, which was a problem in the leaf spring Scorpio of the early 2000s. However, it is a tad jittery on rough and uneven surfaces.

The handling on the other hand is decent for city driving. There is lots of roll in the body, when driven quickly around bends. The steering wheel is also heavy at low speeds, which increases the effort to park.

The Scorpio is a tried and tested product from the Mahindra stable and is one of the best Indian SUVs on the offer. The engine is powerful, the driving is easy and the space is decent.

Those looking for an SUV with seven seats; the Scorpio is a good choice as it has decent bells and whistles embellished in it.