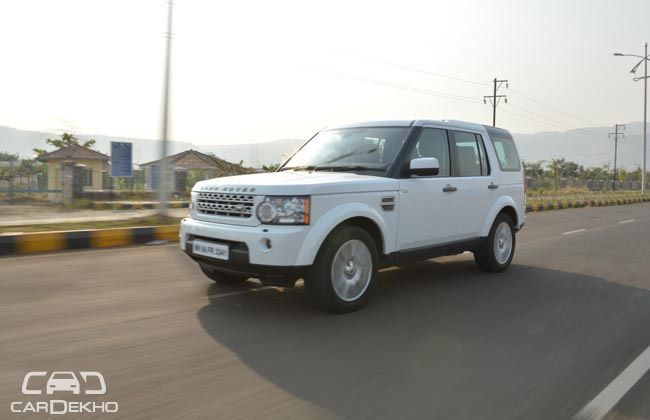 I was driving out of town, listening to some of the late-80s classics. Billy Joel’s “ We didn’t start the fire” was streaming through the speakers. The image of a man wearing black sunglasses in dark pops up whenever I hear that song. The video was filmed in 1989.  That is when people wore squarish Ray Ban shades, denim was the “in” thing and SUVs were also like a box for their practicality.

It was in the same year, that the world witnessed a new SUV from Land Rover , the Discovery— just a year before the start of the 90s. I was driving the latest version of this same vehicle, the Discovery 4 .

This vehicle was built on the Range Rover chassis to compete with the cheaper Japanese SUVs.  Since then, the Discovery has been evolving in design and technology across its generations and now it has reached its fourth-generation. We take the Discovery 4 for a spin to understand how good the four-generation is.

The Discovery 4 is an updated version of Discovery 3 to make it look similar to the Range Rover styling. The Discovery 4 or LR4 as it is known in the North American market now has an urbane styling when compared to its predecessor.

The front grille resembles that of the Range Rover, and it also gets the additional side metal scoop.  The Land Rover’s clamshell hood is retained and even the stepped roof of the Discovery.

The roof rails have now gone off and the silhouette looks more contemporary than the previous Discovery. The older Discovery was a derivative of a typical early 2000s. The glass surrounding the third row of seats is now smaller and the wheel arches do not have the bulge.  The rear still gets the step glass and lower part of the bumper is black. This continues till the rocker.

There are no two ways about it. If you go off the road, you are either on gravel, sand, snow, rocky bed or water. Generally, while driving on snow you wear gloves making operating the buttons and switches difficult. In case of the Discovery’s interiors, after some deep thinking the buttons on the centre console and even the steering wheel are made larger for easy operations.

The instrument panel gets the twin-dial speedometer that is easy to read. The centre console has a touchscreen music system with satellite navigation, Bluetooth connectivity, and aux-in input. The terrain-response system is also there on the Discovery 4— a feature that is standard across all the Land Rovers.

The power window switches are mounted on the top as well. These are water proof one doesn’t need to worry about it in your windows are open even n rains. There is also a fridge in the centre armrest.  There is also cruise control, for easy highway driving. Also, there is a sunroof and two moon roofs over each row.

The Discovery 4 has three rows of seating. The first two rows are well spaced, with decent room for your head and legs. However, the third row is a bit tight. Folding for the first time was difficult, but you do get a flat bed once the second and third row of seats are folded. We found it good enough for short trips. Generally people buying the Discovery 4, might be happier to have at the most only 5 people sitting inside.

The Discovery 4 is plonked with a 3.0-litre V6 engine that churns out 241bhp of power and 600Nm of peak torque. This engine is widely available on various other Jaguar and Land Rover models. The power delivery of this oil burner is linear and there is sufficient torque available around the rev band. There isn’t any turbo lag either as the blades whirls at about 1800-2000rpm.

The engine is noisy on starts and it has the typical diesel clatter. But all this is outside, inside the cabin is well insulated and no sound intervenes. Plant your right foot and the engine pulls cleanly.

The Discovery 4 comes mated to a six speed ZF self-shifting transmission. We have experienced this engine on the Range Rover Sport and the Jaguars as well. It is smooth shifting box when you cruise, however it does feel a tad slower than one would want during quick shifting. We can say that the gearbox somewhat blunts the performance of the engine.

The handling of the vehicle isn’t impressive considering the size and the centre of gravity of the SUV. But on highways and in city traffic the handling is good, and that is where the Discovery 4 will be spending a majority of its time.  Even the steering wheel is light at low speeds and weighs up well when the speed increases.

If some day the owner decided to take the Discovery 4 off the road, he shall be rewarded with the most capable off-road system. Five different terrain modes can be selected from the knob on the centre console. Off-roading in a Discovery is just effortless and this is the pinnacle of all the Land Rovers, even be it the voguish and urbane Evoque.

The Discovery 4 comes packed with rugged off-roading prowess and immaculate English luxury. This is the zenith of all the Land Rovers and the Discovery 4 lives up to it.

So, if you need a vehicle to go anywhere in the lap of Luxe, the Discovery is one to pick. Also with the Discovery, you can procure a badge that possess heritage in off-roading vehicles.