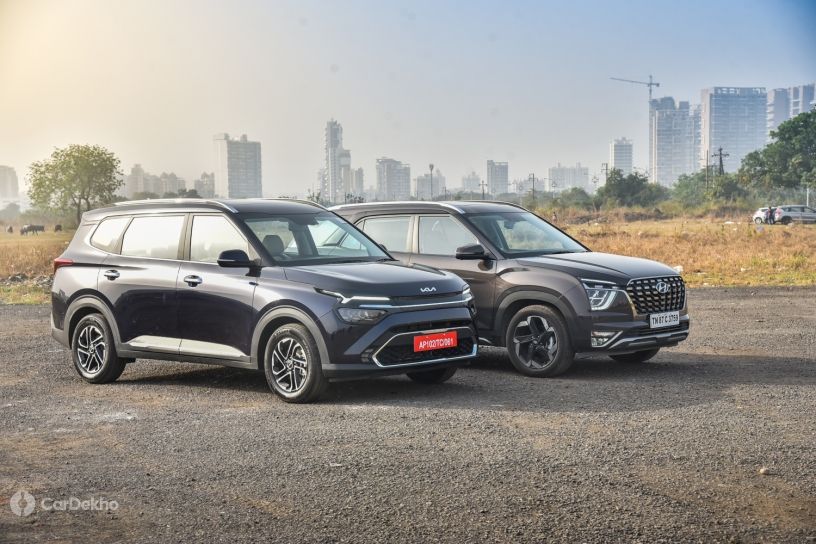 Experiencing the Hyundai Alcazar and the new Kia Carens reaffirms a simple thought: similar ingredients can lead to unique experiences. On paper, there’s too much in common -- the underpinnings, engines, as well as their core premise: a feel-good 7-seater for the family. However, their fundamental differences come up almost immediately in the real world.

What makes an SUV?

Many eyebrows were raised when Kia claimed the Carens WASN’T an SUV. It seemed practically illogical, considering even small hatchbacks ride on the SUV bandwagon to garner some extra attention. The Carens could also pass off as an SUV with a confident stance, 195mm ground clearance, and size. In fact, in every measurable way, the Carens is larger than the Alcazar.

While the Alcazar chooses to stretch the concept of a Creta (and literally so), the Carens hides its Seltos roots effortlessly. Kia has also cleverly played around with core aspects of the design -- a lower nose, a larger glass house, smaller 16-inch alloy wheels -- to give the Carens a persona that isn’t a wannabe SUV. It seems a little more purposeful than your run-of-the-mill MPVs like the Ertiga or the Marazzo, and a little more desirable too.

The Alcazar will likely appeal more to those who want a near-traditional SUV design. Straighter lines, larger 18-inch alloy wheels, and a squared-off bonnet mean the Alcazar’s design isn’t as much of an acquired taste as the Carens. Both grab attention and seem equally polarising at first -- the Kia, a little more than the Hyundai.

Thanks to healthy ground clearance, both vehicles are adept at tackling less-than-ideal roads. Both cars deal with potholes and rough surfaces without a sweat. However, the Carens has a slight edge in this department too.

The small wheel size-and-large side wall combination works in the Carens’ favour as it goes about absorbing bumps and undulations. In the Alcazar, you tend to feel more of the surface while experiencing some vertical movement as you make your way over level changes in the road surface.

Kia is offering a solid safety suite right from the base variant. Six airbags, ABS with EBD, vehicle stability management (ESC) and all-wheel disc brakes are offered as standard. The Alcazar gets dual airbags in the base variant and offers identical safety features in all other variants. Notably, neither the Alcazar nor the Carens has been crash-tested by an independent authority.

The Kia Carens and the Hyundai Alcazar exhibit two different yet popular approaches to making a 7-seater. One elevates the concept of an SUV, whereas the other puts the spotlight on practicality.

Consider the Alcazar for two reasons:

Goes without saying that the Alcazar is better off being treated as a 5+2 than a proper 7-seater.

The Carens presents a solid case for itself:

With the Kia Carens,there’s a trade-off on some features for an experience centered around space and comfort.

Yes kia caren is the best

Yes kia caren is the best