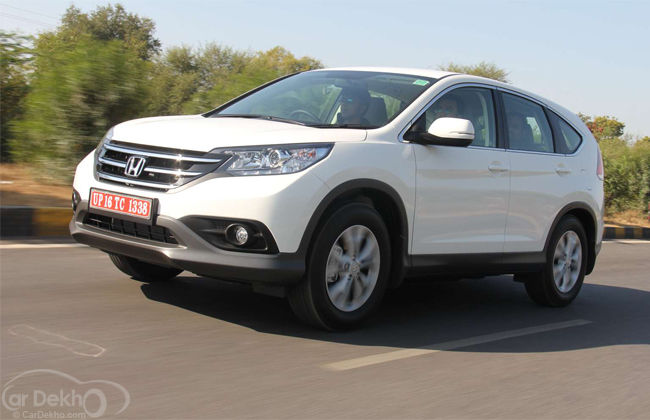 Staying in one of the best hotels in Udaipur, we decided to do a photo shoot around the property. During the shoot, a bloke walks up to ask if this is the new generation of this soft-roader.

Looks around and notices the paddle shifts. And says, “Nice! Is it on sale already?” He wasn’t the only one, we had several heads turning around as we drove in the CR-V around Udaipur. So, how good is the new CR-V? If you were waiting for one of these kind of vehicles, dig in deeper to know in detail.

Honda’s philosophy man maximum, machine minimum has made the CR-V shorter than before, however the same wheelbase has been retained. The fourth-generation of CR-V is the evolution version of the outgoing model. The new generation CR-V can be related to the old CR-V at the first glance. The CR-V gets a new bigger and wider grille, which also intrudes into the headlamp.

The silhouette has large wheel wells indicating larger tyre could even fit in here, the DLO has a chrome surround and retains the typical CR-V design. The new 10-spoke alloys do look good and adds more glam to the side profile. The new tail lamp design is also an evolution of the old CR-V. For the first time, you might not find the location for opening the boot, because it placed at lower than the conventional. The lower end of the bumper gets matt black finish.

The Honda CR-V has seen an upgrade on the inside as well. The quality of materials used is top-notch and the cabin does feel premium.

The black colour dashboard gets a minimum number of buttons and knobs on it, making it easy to read.

The three-spoke steering wheel is large and chunky to hold and it does feel nice to hold. Even the entry-level model on the CR-V gets cruise control as a standard feature.

The large dial on the instrument cluster is easy to read and there is green light that comes on when the engine is running within as economical mode. Ideally, this is when the motor is spinning below 3000rpm. The centre console is simple and easy to use with minimal buttons. The gear lever is mounted ahead, freeing space for stowage.

The front seats in the CR-V are large and good for long journeys. The seats have a good thigh and side support. The rear seats have decent space, but the legroom could be tight if two six footers sit back-to-back.

The thigh support could have been better, and the large central intruding tunnel makes the CR-V a four-seater. The boot is large enough to swallow ample of luggage without any issues.

The 2.4-litre come with infotainment system that gets satellite navigation, Bluetooth connectivity for calls and streaming music and reverse parking camera.

The Honda CR-V is available with 2.0-litre and 2.4-litre petrol engines. The 2.0-litre is available with six-speed manual transmission and five-speed automatic, while the 2.4-litre comes only with a five-speed self-shifting box. Both the engines have low levels of NVH (noise, vibration and harshness). Each of the engines has got an upgrade on the power ratings to enhance the performance.

The 2.4-litre mill is definitely more peppy than the 2.0-litre, however the 2.0-litre manual has sufficient power. The six-speed spreads the torque evenly and it makes it a joy to shift on the simple stick shift. The real rush from the power comes when the engine crossing 4000rpm and as it inches closer to redline. The shifts on the box are precise and short. The short gear knob makes the throws smaller. You might have to downshift to make those quick overtaking manoeuvres. The CR-V’s 2.0-litre also comes mated to a five-speed automatic transmission. We couldn’t get our hands on it, but it won’t even get paddle shifts as standard.

The 2.4-litre on the other hand with come with paddle shifts. Again here as well, the power band is about 4000rpm. The engine red lines at 7300rpm and the exhaust note has the typical Japanese scream, which is music to ears of motoring enthusiasts. The automatic transmission can be driven in sport mode as well. In the sport mode, once you use your paddles, the manual mode is engaged. In this mode, the gears do not upshift even if you redline, which makes it more fun to drive it on twisty roads. The 2.4-litre has an all-wheel drive system that transmits power to the rear wheels, when it detects loss of traction in the front wheels. All the CR-V variants come with the Econ mode button, in which the engine maps are tweaked for better fuel efficiency than performance. We didn’t much of a difference in power delivery.

The ride of the CR-V is good and it is calm and composed. The suspension does a good job of absorbing most of the jolts ironing out all the bumps from the cabin.  We drove over bad patches of road, large potholes, and uneven roads and yet the ride didn’t feel unsettled. It was composed when at high speeds.

The suspension doesn’t have long travel, which even reduces the body roll.

The handling of the CR-V is just like a sedan. The CR-V was designed to have high ground clearance and the drivability of a sedan. The less body roll means easy to drive and fun around corners. The only thing that we are against is the light steering wheel that doesn’t weigh up even when the vehicle gathers speed.

The Honda CR-V is a good crossover to procure with good styling, decent space, first-rate fit and finish, and powerful engines. There are SUVs with a more premium badges, but the CR-V matches the quality and finesse of those vehicles. Honda is still to share the pricing of the CR-V and we will suggest the 2.0-litre manual as the option to procure, as we liked that model, or then go for the 2.4-litre automatic.