Published On Jul 13, 2016 By CarDekho for Ford Mustang 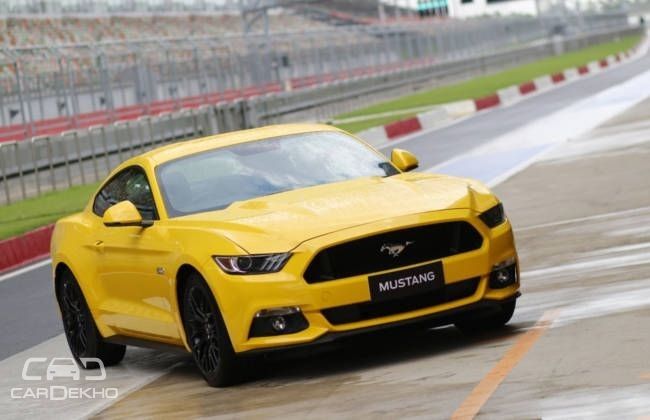 Remember the final scene in Gone in Sixty Seconds where Memphis Raines is being chased around Los Angeles in the 1967 Mustang GT 500 (which he also calls his Unicorn) with half the city’s police and Detective Castleback leading the charge in his new BMW.  Then there is the epic chase scene from the 1968 movie Bullitt where Steve McQueen is in his 1968 Mustang GT being chased by the baddie in his Dodg Charger around the streets of San Fransisco. The Mustang is probably the most iconic Muscle car in the world. People might give confused looks when you mention the Chargers and the Camaros but the Mustang name is always met with enthusiastic nods and smiles. So when the best getaway car came to the BIC, there was no way that we would pass the chance to have a go.

Before we begin, it looks the best in yellow. Now that we’ve expressed our opinion, let’s begin. The Mustang is now in its sixth generation and still looks as retro as it did in the sixties. The new design that echoes the original one stays true to its roots. The grille is massive and big enough to swallow a full grown man whole and is flanked by two angry looking headlamps. The bonnet is long and wide enough to hold a tennis match on, the roof is low and the car ends with a short almost fastback style boot. Speaking of the boot, it measures 383 litres which you would think is enough but most of it is occupied by the full size spare tyre. The tail lamps though are a work of art. The tri-bar design looks retro and echos the design of the original Mustang GTs.

Now, at this point we would go on a long ramble about the cabin but the truth of the matter is our drive was more of a 'jump in - drive six laps - get out' kind of a deal. So we didn’t spend much time getting to know the interiors. What we can tell you is that the centre console is riddled with toggle switches (again, retro) and that the dash is upholstered in leather combined with a brushed aluminium finish. The door panels though are made from hard plastic and don’t feel as upmarket as they should. The buckets seats though are comfortable but the seat back rake is manually adjustable and surprisingly, there is space for two in the rear.

The first thing that you notice when you plonk yourself in the driver’s seat is the sheer size of the car. The bonnet feels like an endless expanse of yellow (yes, we hijacked the yellow one) and your passenger sits almost a tennis court’s width away. Plus you sit really low in the car and that increases the perception of the ‘Stang’s size.

Start the engine and the 5.0-litre Coyote V8 wakes up with an audible burble. It’s not a thundering growl like the one we expected but a composed V8 burble (blame the sound emission norms). Out of the pit lane, I stamp the throttle, there is a bit of wheelspin and the instructors voice is drowned out by the loud rumble from the V8 engine. The sound gets only louder as you near it's 6500Rpm redline. The response from the engine is immediate as the car is thrown forward towards the first corner which is tackled quite easily, the car maintains its composure as we head uphill towards the third corner. We go over the crest, brake hard, the brakes bite well and provide plenty of feel we turn in, hit the apex and open the taps on the 1.2km long back straight. The car darts off as the 401PS surge through the car and the 515Nm of torque also plays its part.

The gearshifts though feel slightly off, as in there is a bit of lag between you pulling the paddle shifter and the gear actually engaging. But there is no denying that this car is fast. As we approached the braking marker we were doing over 220kmph. Brake hard for the almost hairpin and the back starts to twitch slightly. Trail the brakes even slightly however and the tyres start to squeal as the ‘Stang understeers quite a bit. That’s when you realise the Mustang is quite front heavy so the trick is to let off the brake half a second before you enter a corner so the weight shifts back to the rear of the car.

Also going in to the next set of corners which are a fast left hander going into two consecutive chicanes, the rear felt a bit unstable and due to the soft sprung suspension, the body roll was felt more prominently than we expected. Also, while braking for a corner the 6-speed DCT sometimes refused let me downshift aggressively which meant I entered a few corners in a higher gear than I would’ve preferred.  Gas it out of the corner though and tail immediately steps out. So it might not be so great at carving corners but going sideways it does perfectly. Also, the steering is well weighed and provides plenty of feedback.

All in all, the Mustang isn’t a track tool. It is a tad too heavy and a bit too long and even the suspension setup is on the softer side. It is a car that you drive slowly through town to announce to everyone that you’ve arrived. Also, it costs Rs 65 lakh ex-showroom Delhi and is the only high performance car that gives you a V8 at that price. The build quality is solid, it looks great and it’s a Mustang which means if you buy one of these you’ll be turning heads no matter where you go. Plus, it loves to go sideways and it will make you feel special every time you’re in it even if you’re being chased by a contract killer in his Porsche.