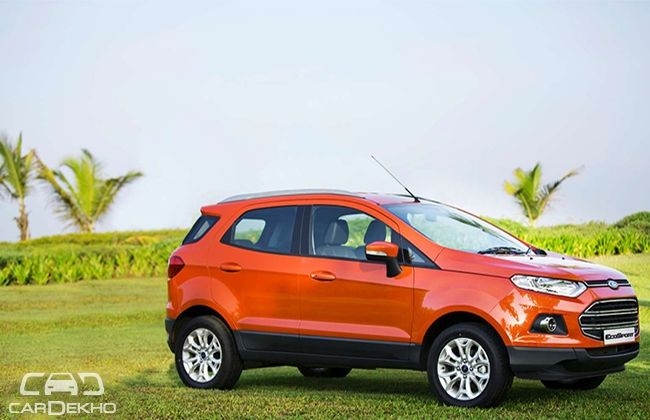 People lead multiple roles in their life, and now they need everything else to be intelligent too.

There is also a similar expectation from automobiles. They need to be small on the outside, spacious inside, with all bells and whistles, powerful yet frugal engine and good driving characteristics.

This is why the drift has been towards compact SUV. One such vehicle in the making is the Ford Ecosport . We drive one, a month more its launch and share our opinion. So, how well does the Ford Ecosport in the Indian conditions? Read further to know how good it is.

The Ford Ecosport has impressed several people with its design and that is one reason why we were flooded with several enquiries on this compact SUV. Ford has played it well, as it is less than 4 metres in length and even the engine is smaller than 1.2-litre. This will help the company in pricing it aggressively. Ecosport shares the Fiesta platform and it is based on the Kinetic Design 2.0.

Front of this SUV has a small front grille, while the lower grille is trapezoidal. A wide hood sweeps into sculpted bodylines, conveying a dynamic spirit of energy in motion.

Modern, slim headlamps frame a high-mounted trapezoidal grille, which gives the Ford EcoSport an element of pride and a signature Ford face. The lines of the headlamps stretch towards the rear, allowing the air to flow around them and improving the SUV’s aerodynamics.

The silhouette is stylish and unique. It gets the muscular beltline, formed by the windows and door creases, ascends as it runs to the rear of the car, adding to the sense of movement on the vehicle. At the back, the large rear window wraps around to the sides along with oblique tail lamps. To keep the rear profile sleek, the tailgate handle was built into the tail lamp. A small black access button on the tailgate handle can be used to unlock the boot.

This is one zone that people are waiting to get into. Step inside and you will notice the instrument panel has been designed like a cockpit with several buttons and even a number pad for easy dialling.

This design has been picked up from its sibling Fiesta and there is no hiding in it.

The quality of the plastics is decent, but we believe it could have been better.

The Ecosport’s interiors are blue backlit instead of the red that we witnessed in the Fiesta.

Also, one mismatch is the interior seat trim that gets red stitching on black art leather. In our view, if it were blue then it would have been a uniform theme throughout.

The front seats are well designed with good back and adjustable lumbar, though they lack that extra thigh support that we were so used to on the Fiesta.

There is sufficient knee room for three six footers at the rear. Being an SUV, it has flexibility of seating. The rear seats have three stages of recline and also the option of 60:40 individual splits.

The boot of the Ecosport is decent in size, however weekend luggage for five will be a bit of squeeze.

Another new feature on the Ecosport is the SYNC. Microsoft designed this software for Ford cars , and this is the first Indian Ford to get this option.

It is an open source file, and developers can make any application for it. We will soon see other carmakers to introduce such systems.

The Ecosport gets keyless entry, push start and stop, and even reverse parking sensors. The range-topping version gets Bluetooth connectivity for telephone and music streaming.

Ford is offering three engine variants on the Ecosport— there is the revolutionary 1.0-litre Ecoboost engine, the 1.5-litre petrol and diesel options. The latter ones are available on the Fiesta also. Only 1.5-litre petrol gets the automatic transmission, while rest all come with five-speed manuals. We drive the 1.0-litre Ecoboost, which Ford believes will change the concept of petrol cars in India . This mill has three-cylinder whipping 122bhp of power and 170Nm of torque. This engine weighs about 97kgs, and is about 18kgs lighter than 1.5-litre. It still produces more power and torque than the 1.5, despite having lesser displacement. This means more fuel efficiency on the Ecoboost.

The power delivery is linear and the turbo spools from about 1600-1700rpm, and remains flat almost up to 4300rpm. There is no feel of turbo lag, and the engine pulls without any hesitation even when heaved into a higher cog. Get behind the steering wheel, and you realise that this isn’t a1 .0-litre engine by any means. The turbocharger helps to change this thought and the Ecosport is definitely good to drive in city and also on open road. Another good thing about this engine is the NVH. It doesn’t idle like a three-pot mill and there is no vibration or screaming that can indicate the size of the engine. The five-speed manual that comes mated to this engine is wee bit rubbery, but that’s about it. The shifts are almost positive, while the throws remain short.

Ford vehicles are known for their driving dynamics and the same has been trickled down on the Ecosport. The ride of the vehicle is well sorted as it goes through bumps without any issues. The suspension does a good job of soaking up the bumps even on bad roads and uneven surfaces.

The handling is good for a vehicle with 200mm of ground clearance. There is no body roll, and Ecosport drives like a sedan. It doesn’t feel heavy and big to drive like SUVs, which makes it easy to drive in urban conditions. Driving around winding roads is fun and even the feedback from the steering wheel is good. The short turning radius and light steering makes it convenient to park.

The Ford Ecosport always had the styling of an SUV, and this has been attracting several people. The Ecosport definitely has the charm in its styling and even the space on offer is good for a sub 4-metre vehicle. We are impressed with the flexibility of seating and storage space. The Ecoboost engine is also well powered and we like the overall pace and drivability that it offered us. The Ecosport definitely has the grace, space and the pace. Now, all depends on how well the company prices this model. We assume it to be between Rs 7-9lakhs for the EcoBoost engine powered model.