Driving At The Mercedes AMG Academy

Published On Feb 10, 2012 By CarDekho for Mercedes-Benz SLS AMG

It was always imagined by me and some dreams were brought to reality while driving on the Buddh International Circuit. On a cold winter morning, a bunch of selected auto journalists were headed to India’s premier F1 race track to get behind a few Mercedes AMG cars that were lined up for us. The occasion being the launch of Mercedes AMG Driving academy called as the AMG Driving Academy. Mercedes has specially lined up supercars including an E63 with one SL65 and there also were three C63s, and the icing on the cake was the mighty SLS which was in all black.  Mercedes had also lined up two C250. 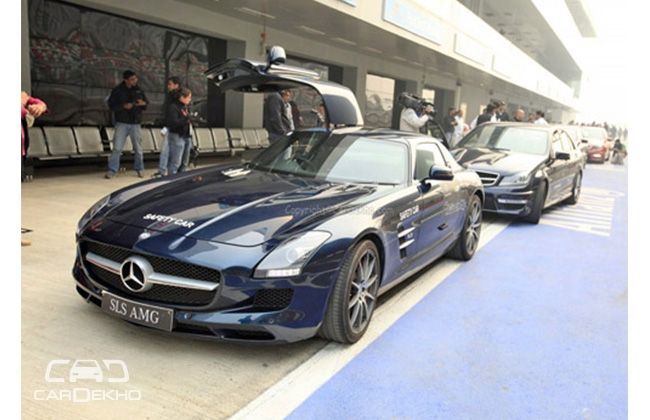 Let’s give you a brief about the AMG Driving Academy. Mercedes Benz in association with Jaypee Sports International Limited has kick-started the prestigious academy in India and is only available in three other countries around the world including China, USA and now India. The first batch for the AMG Academy starts in March 2012. Interested and aspiring entrants can do a single day drive course at a price of Rs. 75,000 but if you happen to own a Mercedes you get a discount of Rs. 25000 and you need to pay just Rs. 50,000 for a day’s course. The course payment includes the car with food and insurance cover for the driver.

On the course you get to drive the C63 AMG and the E63 AMG. You would be trained by special German instructors from AMG who would be guiding you step by step through the course. These experienced AMG trainers who are also race drivers would be specially coming in from Germany. There would be a basic driving course while the advanced driver’s course would be on the Academy list soon. There would be eight participants in a group and two groups per weekend with a total of four weekends a year. Mercedes AMG Academy also is offering special tailor made driving courses for corporate houses on special request. Interested can register themselves on the official AMG Driving Academy http://amg-drivingacademy.co.in/. At the end of the course the participants will also get a Certificate from the AMG Academy.

It was time to experience the drive and we were first given a crash theory course by Reinhold Renger who is the Chief Instructor at the AMG Driving Academy. We were explained the safety rules, braking fundamentals, seat positioning, how to make maximum use of ABS and ESP, and basics on how to drive on the circuit all using a very good audio visual presentation. After the theory session we were in for the real thing and made our way to the track.

Before we drove ourselves we were given a Taxi drive with Bernd Maylander who’s a very well known face in the F1 circuit and has been the official F1 Safety Car Driver for the past Twelve years. We had to put on the safety AMG helmet. Bernd was in the driver’s seat for the trial taxi run and I was in the front passenger seat of the C63 AMG in the pits.

As soon as Bernd pushed the gas pedal of the C63, I was pushed back in my seat with my head kit in the head rest and the G forces began to work on me. Bernd drove the C63 which develops a mighty 457Bhp and makes 600Nm of Torque out of the V8 engine and you can just imagine the amount of G force that was working on me.

Bernd explained the minute details of the Buddh Circuit track and we were informed of the sharp hairpin bends and the layout during the taxi run. The sound generated from the mighty V8 engine under the hood was out of this world and very difficult to explain in words. Bernd was driving the C63 as it was another day to office and he was talking to us all the time.

I was being worked on by the G forces as the C63 went through the bends and curves of the Buddh Track. I could hear the brakes screeching and the ABS coming in to stabilize the C63 as it went around the corners. Bernd was doing more than 240kmph and you can imagine the feel at this speed and which this power and safety features on the C63. We did 2 hot laps for taxi and then were back to the pits. My head was still in a dizzy and had to pinch myself to see if in reality I was being driven on the Buddh Circuit by the legendry Bernd Maylander. After experiencing the taxi drive in the C63, I now know why Bernd is the official safety car driver for the F1 races for the last twelve years.

After the Taxi Drive with Bernd it was time for the next agenda, it was time to get behind the wheels and drive the AMG on the Buddh Track. Yes this was the moment that I was waiting for. I hurriedly took my driver’s seat in the C63. In this part we had to drive behind the lead car which incidentally was the SLS AMG. For the records, the SLS AMG is powered by a 6.3liter V8 engine that makes 571Bhp of power and has 650Nm of Torque under its belt to put you in a dizzy. The SLS AMG is capable of reaching speeds of 100kmph in just about 3.8seconds and does a top speed of 317Kmph.

Gentlemen fasten your seat belts was the sign after a last minute check by Bernd on all the cars lined up and I drove off from the pits and on to the track driving the C63 and trying to follow the mighty SLS AMG. It was still hard to believe that I was driving around in a C63 and that too on the magnificent Buddh Circuit. Bernd was in touch with us from the SLS AMG via the wireless walkie talkies that all the AMGs had. I had set the suspension set up to Sports mode as directed by Bernd.

The engine noise that the 6.3Liter huge engine made was awesome and I can still hear it in my ears. ‘Wow is the easiest way to explain the feeling behind the wheels of the C63 AMG. This true breed meant for the Track felt very agile and is assisted with a host of safety equipments. The sharp bends and the hairpin corners were all mine.

I was experiencing what it really feels to be behind the wheels of this mighty beast. The under steer and over steer were all handled beautifully by the C63. The grip level on the Buddh circuit was not to the best as the track was not used after the first F1 race. But still the C63 drove like a dream on the track.

Very soon I could see the 240KMPH speed on my instrument cluster and I realized how easily the C63 could attain this speed levels. Let me add here that the 7g-Tronic special AMG gearbox also didn’t miss a beat and worked super smooth to keep my C63 in the perfect power band at all speeds.

The last drive for the day was with Norman Simon who himself is a race driver when he is not instructing at the AMG Academy. This part included getting the C63 across slaloms so that we understand the true levels of handling and braking characteristics of the car. The C63 handled beautifully and did not let me down at any point.

As every good thing has to come to an end, the track day at the AMG Academy also came to an end. It is a superb initiative taken up by Mercedes Benz to start something like an AMG Academy in India where aspiring people can experience what it feels behind the wheels of these magnificent AMGs. Let me add here that the sum charged by Mercedes is nothing compared to the real experience gained at the AMG Academy and that includes some serious driving and lots of fun and G Force included.

I can now proudly state that I am a Certified AMG Academy Driver because that’s what my Certificate says that I was presented at the end of the day.