Published On Jan 03, 2015 By Firdaus for Toyota Etios Cross

We compare the only two selling crossovers in the country to let you know which one is worth your money. 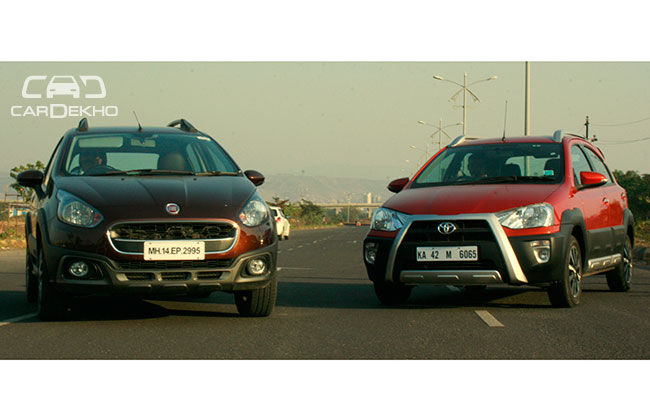 Things that will make you think twice

We Indians love SUVs; we drool over any vehicle with the mildest hint of SUV-ism and would love to own true blue SUVs except for the price deterrent. Most SUVs are expensive and out of budget for the average buyer which makes us drift towards pseudo SUVs or soft roaders or any vehicle with an SUV badge within budget. This obsession has resulted in manufacturers trying to tempt us furthermore by introducing crossovers in the market. Crossover as the name suggests is a cross between a sedan/hatchback and an SUV. They sport the brawly, bulky aggressive stance of SUVs and at the same time offer the interior comforts of cars.

Tapping this potential and fancy of Indians for affordable SUVs manufacturers like Toyota, Volkswagen and Fiat have introduced crossovers of their popular hatchbacks in the Indian market. The Volkswagen Cross Polo didn't quite make the cut compared to its competitors, however the Toyota Etios Cross and the much awaited Fiat Avventura have definitely made consumers notice them; one with its feature list and engine options, and the other with its size and performance figures. We review these crossovers from Toyota and Fiat and let you know which one is worth your buck.

Both the Etios Cross and the Avventura have pleasing looks which will draw you towards them. The Avventura has a taller stance compared to the two and looks more like a serious SUV with a go anywhere attitude. The Etios Cross however gives you the impression that it's a manageable SUV, one with ease of driving.

One look at the Avventura and you'll be bowled over. The Avventura is based on Fiat's popular hatchback - the Punto Evo and comes with clean design lines and typical European styling which is nothing short of elegant. The front end including the nose is exactly like the Punto Evo; the false skid plate and the overall black cladding clubbed with the fog lamps contribute to its sportiness. The increased ground clearance of 20 mm over the Punto Evo's 185 mm gives it a tall stance.

Like most SUVs the spare wheel on the Avventura is aesthetically mounted on the tailgate via a smart mechanism where the wheel is actually mounted via a hinge on the lower bumper giving an illusion of being mounted on the tailgate. This opens sideways allowing one plenty of room to open the boot, though it is not one of the most convenient opening mechanisms around. The other glitch to this is the complexity of dismounting the spare wheel. The wheel cover has to be unscrewed, and then the wheel needs to be unscrewed too before you can change the spare wheel; a little time and effort consuming according to us. The matt black roof rails are sturdy and function to rack up luggage on the roof.

The Etios Cross on the hand stands a bit shorter than the Avventura, but a meagre 4 mm taller than the stock Etios Liva on which the car is based. The Etios Cross too comes with tastefully done black cladding with silver skirts and sans the pseudo skid plate. It's a more handsome variant of the Liva packed with beefiness; the nose is aggressive and aesthetic at the same time especially with the silver insert moustache; the rear is equally appealing. The Etios Cross comes with silver roof rails that look and feel sturdy unlike the Avventura's which make you doubt their efficiency because of their matt black plasticky looks; though  both function efficiently.

Both the Avventura and the Etios Cross have their names embossed in the black body cladding and come with wider tyres and flared wheel arches which lends them an SUV-ish look. Both the cars are visually appealing and it would entirely depend on the individual wanting to buy them which one they find more attractive. The rear design of both the Crossovers is also what sets them apart - if the Etios Cross is sleek and taut like Candice Swanepoel, the Avventura is bootilicious like Kim Kardashian. The phrase beauty lies in the eyes of the beholder would hold true here.

The interiors of both the cars are starkly contrasting. Step into the Etios and you'll be greeted with all black interiors that look sporty and cozy at the same time. The console is brightly light and the speedometer digits are well sized. The speedometer console along with the tachometer is placed at the center and the round vents and dials resemble an airplane cockpit.

The steering comes with steering mounted controls through which one can control music, bluetooth and other functions. Interior space in the Etios Cross is sufficient for well built as well as tall people and it doesn't feel cramped; storage space is adequate for a weekend holiday for three. The quality of materials is sturdy - a Toyota trademark.

The Avventura on the other hand has the same interiors as the Punto Evo. The dual tone dashboard may seem bland for some people but is well designed. The suede leather strip on the dashboard is welcomed by some, but to us it felt a little out of place. The circular dials look sporty and the three dials above the ac vents don't just look good but also offer functionality by indicating the direction (compass) and the incline angle.

Unlike the Etios Cross the Avventura is devoid of steering mounted controls. Other creature comforts such as Bluetooth, aux and USB connectivity are the common features between both the cars. The Avventura being slightly longer than the Etios Cross (by 94 mm) feels marginally spacious and can accommodate tall people comfortably.

Infotainment centres on both the cars are relatively simple to understand and operate, and the only scope of confusion is on the Avventura with respect to its indicators as they are placed on the right side of the steering wheel with European styling as opposed to the left commonly seen on Indian cars.

The Toyota Etios Cross comes with three engine options - one diesel and two petrol; while the Avventura comes with two engine options- a 1.3 litre petrol and the 1.4 litre diesel.; both cars are available in petrol and diesel variants. The Etios Cross we tested was a 1.5 litre petrol engine producing 88.7bhp of power @5600rpm and 132Nm of torque @3000rpm. Power is available at the tap of the throttle and the Etios quickly touches three digit speeds without you even noticing it. It has ample of torque. The Avventura is a little slow in touching three digit speeds since its engine is a 1000 horses shorter than the Etios', however it comes loaded with plenty of torque that the car doesn't knock even while crawling at 30kmph in third gear. The Avventura too is quick to respond and its 1.4 litre engine churns out 88.8 bhp of power @6000rpm and 115 Nm of torque @4500rpm. Both cars come only with a five speed manual gearbox with front wheel drive. The ARAI fuel efficiency of the Avventura Fire Dynamic is 12.8kmpl overall, while that of the Etios Cross V is 14.5kmpl overall – highway and city combined.

Both cars are Crossovers and are best termed as soft roaders as they are devoid of the 4x4 trait seen on sports utility vehicles. Since these are cars that are designed to cater to your everyday driving, they come with soft suspensions that do a good job of absorbing the judders and potholes that most roads in our cities offer. We pushed the cars on straights, around bends and on broken roads, as well as craters and both the cars performed exceptionally well; though the Avventura feels more soft over bumps compared to the Etios. Given its size the Avventura has some body roll, but that's something that can be ignored. Steering on both the cars is responsive and feels just right for their dimension and weight; both are precise too. It's only when you alternate between the two cars in quick succession that you notice the minute difference in weight between the steering - the Avventura's feels a tad bit heavier. Both cars come with an adjustable steering.

Both the cars do exactly what they were designed to - perform well, offer good comfort and give its owners the USP of having an SUV styled car. There is barely a difference of Rs 15,000 between the top end petrol variants of both the cars. If features, safety and performance is what you're looking for, then the Etios Cross is the car for you, also the fact that Toyota has a strong after sales service network falls in its favour. If looks, spaciousness and styling is what you want (without consideration for safety features) then you can pick the Avventura; either case both the cars won't disappoint you.