BMW India recently had a special off-roading event to showcase the strength of its SUV range, the `X` Drive was one of a kind event where in the entire X Series of BMW SUV were up for grabs on the off road tracks specially built by a team of BMW off road training instructors who were specially flown in from BMW headquarters at Germany.Incidentally BMW had introduced the `X` Drive in 2003 and has been working on improving and bettering this intelligent 4Wheel Drive system on its SUV namely the X1, X3, X5 and X6. 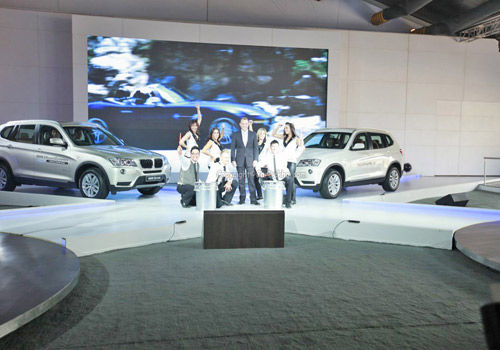 To start with, let’s find out what is an X Drive? As mentioned the xDrive was introduced in 2003 with the new X3 then. Instead of a permanent torque split (which the earlier systems exhibit), xDrive provides torque split between the front and rear axles through the use of a multi-plate wet clutch located in the gearbox on the output to the front drive shaft.

This setup allows xDrive to modulate the torque split between the front and the rear. If wheel slip was detected by the ABS/DSC system, xDrive will react quickly to adjust torque bias. The wet clutch is applied through a high speed electric servo motor turning a cam shaped actuator disc. xDrive is connected to the ABS and DSC systems.

In the case that wheelspin or directional instability still occurs while xDrive is or has been modulating the torque split, DSC will brake independent wheels to regain traction and improve directional stability without driver’s intervention.

The front and rear differentials in xDrive vehicles are an open differential design, thus relying on brake application by the DSC system to transfer power from the slipping wheel to the wheel with traction.

In short the xDrive is a very complex system at work that makes life real easy and safe for the occupants of the BMW X Series SUV when off -roading.The `X` Drive off-road track, was set up at Ambience Mall in Gurgaon.

The event started with a live performance from Raw BANG – a proficient group of Australian percussionists and tap dancers.

After the performance, President of BMW India, Dr Andreas Schaaf welcomed the media and off were we to the track switching between the X3, X5 and the X6 on some shaky terrain.

The track consisted of a hill climb which was to a high degree of inclination where the xDrive used all its intelligence to crawl up the hill and then come down from the other side using the Auto Hold and the Hill Descent mode on the Vertical Limit obstacle.

Off roading in these latest German SUVs is a lot more easy and full of fun as the driver does not need to constantly toggle between Hi or Low ratios as on the older or not so very advanced SUVs.

The BMWs were put through some sand dunes where the torque was balanced and equally divided to the 4 wheels for the perfect traction via the xDrive.

The next obstacle was the dry river bed where the BMW SUVs performed rather well and ironed out the pebbles and rocks that it encountered there. You also had a wet artificial pond that the xDrive BMWs had to cross through.

The most fun obstacle was the rocky uneven patch where the SUVs were driving on 3 wheels with the 4th wheel in air and hats off to the BMW SUV that countered this treacherous obstacle with mighty ease.

The sharp slope obstacle was also fun to drive through.We leave you with the pictures from the `X` Drive and let them do the rest of the talking for the wonderful intelligent BMW SUVs.