Published On Mar 02, 2022 By CarDekho for Maruti Baleno

With more features and an extensive redesign, the new Baleno has created a lot of excitement. But does it live up to the promise? 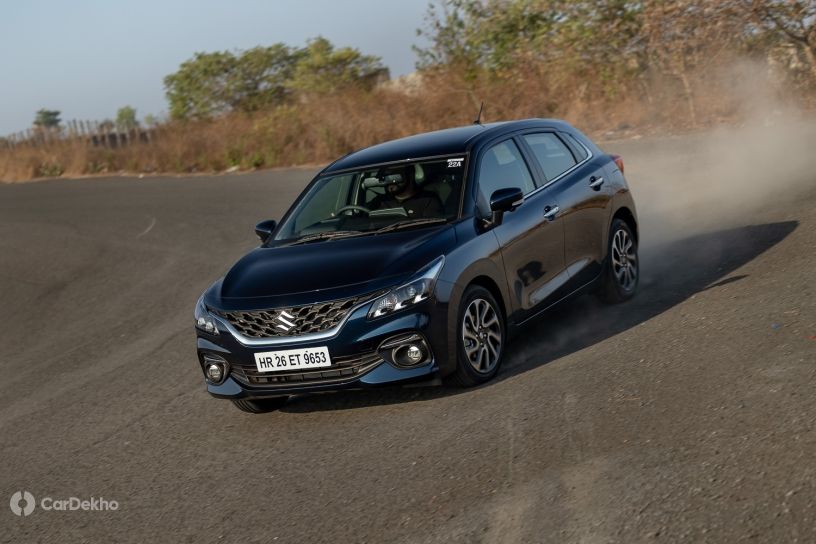 Which was the last Maruti Suzuki car that got you excited? Not many, right? The new Baleno however has definitely created a lot of excitement right from the moment Maruti Suzuki started releasing details of it well before its launch. But will this excitement last even after we have experienced it and driven it? More importantly,f does the new Baleno feel like a proper upgrade as compared to the old one?

The biggest change on the outside of the new Baleno is the front design. Now it looks sharper and more aggressive thanks to the sloping bonnet line, the larger grille and the sharply cut headlamps. In the top Alpha variant you get LED projector headlamps and the fog lamps too use LED bulbs. The top variant also gets new signature LED daytime running lamps which will also be seen on upcoming Nexa cars.

The rear however looks very similar to the old car. The bulging boot lid and the large rear bumper look similar and if you ignore the extended tail lamp element on the boot lid then they too look almost identical. The internal elements though are completely changed, with the same three-LED light treatment seen here as well.

Although Maruti Suzuki has changed every panel on the new Baleno, it looks quite similar to the old car even in profile. It does look sharper thanks to the more pronounced shoulder line and in the top Alpha variant you get 16-inch dual tone alloy wheels.

The new Baleno is based on the same Heartect platform as the old car and as a result in terms of size it hasn't changed much. Wheelbase and width is exactly the same and in terms of length and height it is slightly smaller. But what has gone up is weight. As compared to the old car the new Baleno is up to 65kg heavier. According to Maruti 20 percent of the weight gain is because of the new Dual Jet motor and the rest of it is down to the thicker body panels. Whether that has lent any improved in terms of safety is something that we will know only after it goes through a crash test.

Inside, the Baleno feels brand new thanks to an all-new dashboard. The new design looks modern and has a nice flow to it and the quality has gone up a notch too. Compared to the crude cabin of the old car, the new Baleno feels premium and although you still don't get soft-touch materials, the textures that Maruti Suzuki has used makes a difference. The silver insert on the dash helps the cabin feel wider than before and the blue panels on the dash and door pads help uplift an otherwise all-black cabin. Touch points like the adjustable front centre armrest and door armrest are covered in soft fabric and the leather-wrapped steering wheel too feels premium. Overall the Baleno’s cabin is hugely improved and is right up there with the very best in its segment.

In terms of driver seat it feels the same as the old Baleno where finding an ideal position is easy thanks to the tilt and telescopic adjustable steering wheel and the height-adjustable driver's seat. What could have been better however is the seating comfort. Just like the old car, the seat cushioning feels too soft especially around the contour area which results in lack of support especially while cornering.

You experience the same problem at the rear as well, where the seat cushioning is too soft. This might result in a bit of discomfort over long journeys. Just like the old car, in the new Baleno you get more than enough knee-room, just about enough headroom and despite the all-black cabin you don't feel hemmed in over here. What rear passengers will miss however is a centre armrest, and they don't get any cup holders either.

Other than the lack of rear cup holders the new Baleno has a practical cabin. At the rear you get decent sized door pockets which can accommodate a litre of bottle easily and one single seatback pocket for the left rear passenger. Up front you get large doorbins, two cup holders, space below the centre console to keep your wallet, under centre armrest storage and a decent sized glove box. At the rear you get two charging ports and front passengers have to make do with just a single one.

The boot capacity has gone down by 21 litres as compared to the old car but even now it has a large and well shaped bay which can take a weekend's worth of luggage for four people with ease. Unfortunately, just like before, the loading lip is very high, which makes loading and unloading heavy bags a chore. With the new Baleno now you get 60:40 split folding rear seats which enables you to carry long items with more than two passengers onboard.

The highlight of the Baleno’s cabin is the new 9 inch touchscreen information display. At first looking at the home screen it might come across as a bit cluttered, but once you get used to it, it is easy to use. You get shortcut touch buttons to go directly to different menus and the voice assistant makes it easy to navigate through different functions. The voice command system however is a bit basic and can’t control functions like climate control settings and window up and down.

The second most talked about feature is the heads-up display. A lot of people have commented that it is just a gimmick but in our experience it is actually quite useful. The display is clear and apart from the speedometer it shows functions like RPM meter, instant fuel economy, climate control info and even door ajar warning. The best part is, you don’t have to take your eyes off the road to see these functions.

Other features include a 360 degree camera which has decent resolution and works well, auto dimming IRVM, cruise control, automatic climate control, and a 6-speaker music system that has been tuned by the experts from Arkamys. Although sound quality has improved considerably as compared to the old car, at high volumes you still experience distortion.

In terms of safety, right from the base variant the new Baleno comes with dual front airbags, ABS with EBD, ISOFIX child seat anchorage and rear parking sensors. The good news is that the top two variants are now offered with 6 airbags. With all the AMT and the Alpha manual variant you also get ESP with hill hold.

The new Baleno gets just one engine option. It is powered by a high tech 1.2 litre naturally aspirated petrol motor with dual injectors and variable valve timing, producing 90PS and 113Nm, and is paired to either a 5-speed manual or an AMT gearbox.

This motor still sets a benchmark when it comes to drivability and refinement. The response from this engine is so good that you can cruise at low speeds in third or even fourth gear and even when you want quick acceleration the motor responds without any hesitation. As a result, its performance is effortless as gear shifts are kept to a minimum. The gear shifts too are slick and the light and progressive clutch makes driving in the city a comfortable affair.

If the Baleno is the first automatic car you are going to experience then it will feel good enough but if you have driven more advanced gearboxes like CVT, DCT or torque converter then you will feel its basic nature. For a basic AMT transmission it works really well, with quick enough downshifts for overtaking and it stays smooth for most part. But it's at crawling speed where the gear shifts feel slow and a bit jerky.

Where the old Baleno used to feel too stiff and uncomfortable over uneven roads, the new car feels significantly more pliant. Be it at city speeds or out on the highway, the new Baleno feels at home save for a bit of up and down motion especially for the rear passengers. The suspension too now works silently, which adds to the refined nature of this premium hatchback. High speed stability too has improved as it feels more hunkered down as compared to the old car. What has also improved is the sound insulation where wind and tyre noise is well controlled, which makes for a more relaxing drive.

The Baleno was always known to be a family friendly car and the new one is no different as it doesn't really enjoy being hustled around corners. The steering is slow, devoid of any feel and it also rolls quite a bit when pushed hard. As a result the Baleno feels comfortable when driven in a relaxed manner.

The brakes on the new Baleno have been improved thanks to a larger front disc. In our experience it has more than enough stopping power with a good pedal feel.

Overall, just like the old car the new Baleno is still a safe and sensible choice. Now with the design changes, feature additions and improved ride it has become more desirable too. Some things could have been better though. Maruti Suzuki should have improved the seating comfort, given it a more powerful petrol engine option, and made more significant changes to the exterior to help it look like a brand new car.

But the one thing we missed the most is a more premium automatic option, especially when you consider one of its biggest rivals, the Hyundai i20, offers a CVT as well as a DCT option. But what brings the battle back in the Baleno’s favour is the price. Despite the improvements and feature additions, it only costs slightly more than the outgoing model, which makes it an exceptional value proposition.