Published On Dec 16, 2019 By Nabeel for Mercedes-Benz GLC

Merc says the 2019 GLC is smarter, better looking and more powerful than before for a marginal increase in price. But is there a trade-off hiding somewhere? 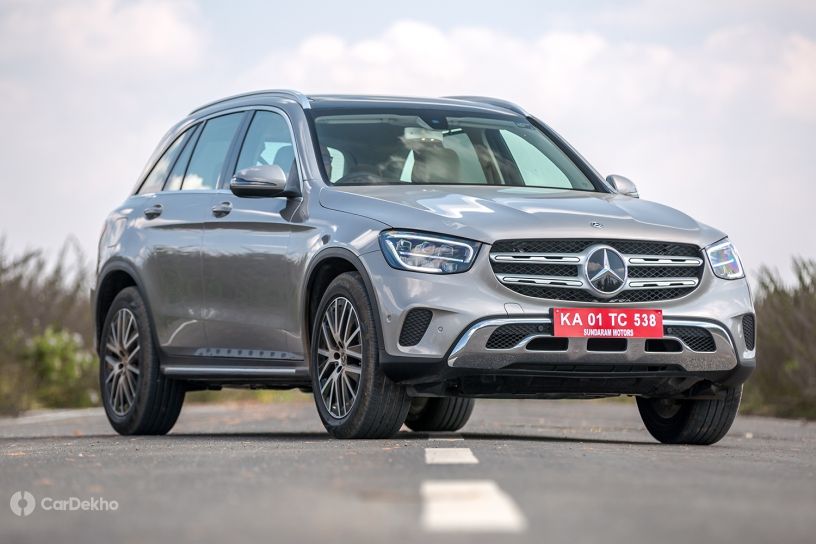 First launched in 2016, the GLC has managed to become the best-selling SUV for Mercedes-Benz in India. It managed to do so by offering a sweet balance of luxury and features for someone looking for a mid-size luxury SUV. The 2019 facelift doesn't alter that formula, instead, gets three major updates - appearance, engines and a whole new infotainment experience. Let's have a closer look at these changes and figure out how they affect the experience of the GLC.

The GLC has a split personality. Look at it from the front and it packs the attitude of an SUV. But from the side, the silhouette is more like an estate. While this design has not changed a bit, there are elements which make its presence more dominant. The grille still looks similar but feels refreshed with a few new accents. The headlamps are all new and get the full LED treatment. The DRLs are also more squarish and outline the cluster.

The most prominent and my personal favourite change is on the side - new 19-inch alloy wheels. Going a size up than before, these dual-tone multi-spoke wheels look stylish and make the stance of the GLC more prominent. These also help the SUV pull off the estate-like roofline with more sportiness. Another bit which adds to the feel-good factor is the sturdy aluminium-look step board and the swirling door handles which are natural to hold.

At the back, you now have squarish LED elements in the tail lamps. These look a lot like the ones on the new GLS, which will be launched later next year. Overall, the 2019 GLC is not very different than the one before, but this one definitely looks more modern.

The basic dashboard layout has been retained by Mercedes but you now have the open-pore wood finish on the centre console. This looks and feels more premium than the piano-black finish before it. The biggest change, however, is the bigger 10.25-inch screen (the older one was a 7-inch unit) floating on top of the dashboard. This is part of the latest MBUX (Mercedes-Benz User Experience) infotainment system which has been tuned for our country at Mercedes’ Bangalore facility. The screen now accepts touch inputs and there is a new trackpad as well in the centre console which offers haptic feedback. The steering wheel also gets touchpads for inputs that makes using the screen while driving a lot easier. The screen gets a beautiful display which is rich in colours and smooth in operation.

But, the party trick is voice commands. The voice assistant gets activated by the term ‘Hey Mercedes’ and performs functions like setting climate control temperatures, volume, navigation routes, ambient lighting colours, cabin lights or reading out vehicle details like the expected range seamlessly. The two microphones for the commands are placed on the roof, one for the driver and the other for the passenger. If the command for climate control is given by the driver, only his side is adjusted. Pretty neat. But, if you are sitting on the back seat, you will have to shout your commands. Also, these commands do not work for your navigation or music selection when Android auto or Apple Carplay is connected.

You can even ask the system about the weather, to find you a hotel, coffee shop, hospital or police station as well. And the commands to these are natural too, like when we said ”Hey Mercedes, I am tired’ the system looked up all the 5-star hotels close to us. The voice commands need to be clear and they work eight out of 10 times. The system supports multiple languages, none of them Indian at this time. The system also learns our behaviour and will start to adapt by giving you your preferred radio station, or the preferred ambient lighting at different routes or time of day.

And there are some commands which you can use to have a bit of fun or show off to your friends. Like asking the system to tell a joke gets you “sorry, my engineers were German” and saying ‘I love you’ will get you called a creep. And there are multiple replies to each of these queries as well which will keep you entertained.

The system also comes with connected features. The e-SIM in the console helps you make emergency calls and share your location with the authorities for a quick response. It also enables over the air updates to the system. Plus, you also have a smartphone application from which you can lock/unlock or start the car for cooling/heating the cabin. Also, the voice commands or the app functions don't let you open the windows for safety reasons.

The other screen is a 5.5-inch MID which gives you a lot of information about the drive, as well as the infotainment. It is controlled by the touchpad on the right side of the steering wheel. This makes it very easy to use while driving. But, having a fully digital instrument cluster in place of the analogue ones could have made the cabin feel more up-to-date with the rivals. Also missing are radar-based safety features which you get in the Volvo XC60. Both of these are available in the international-spec GLC. Also, and this is clearly a nitpick, but the door-lock bars are made of tacky plastics, and not the machined aluminium ones we have seen on other Mercedes cars.

Other features in the cabin include dual-zone climate control, wireless charger, 5 USB Type-C ports, 9-speaker sound system, ambient lighting, sunblinds in rear doors, and a sunroof. A 360-degree camera, however, is missing. The quality is exactly what you’d expect from the three-pointed star and there is plenty of space for the rear passengers as well.

The boot of the GLC is one of its biggest highlights. With A cargo volume of 550-litres, and expandable to 1600-litres by folding the seats, the GLC can hold pretty much anything you can pick up and keep in it. And this time around, you get a powered tailgate as well. The seats fold with the touch of a button which further increases convenience. The spare wheel, unlike the last model, is now tucked away under the boot and you get a 12V socket to plug-in accessories.

Enough with the numbers. Crank the engine and the first thing you will appreciate is the refinement of this motor. Be it idling, city driving or highway cruising, the engine never gets loud or crude. While the same engine in the E-Class feels a lot quieter, It’s a lot better than the older diesel in the GLC.

Get moving and the power delivery is nice and smooth. It never catches you by surprise. Even in the Sport drive mode, the power never feels overwhelming. This makes driving the GLC 220 d a breeze to drive, no matter what car you're upgrading from. At the same time, you are never left wanting for more power either. Even while cruising on the highway or going for quick overtakes in the city, the 9-speed transmission is quick and precise to downshift and get you going quickly. The claimed 0-100kmph time stands at 7.9 seconds, and will be put to the test in our road test. The four drive modes on offer - Individual, Sport, Comfort and Eco, alter the throttle response, gear-shift logic and the steering weight to adapt to your driving mood.

Overall, the GLC is an easy and effortless SUV to drive for all practical conditions and the refinement of the new diesel just makes the experience a lot better.

The GLC’s springs were always focused on keeping its occupants comfortable. And even with the bigger 19-inch wheels, the same has been retained. Go over a pothole, speedbreaker or a broken patch of road, the GLC laughs it away. The occupants barely ever feel the harshness of the surface and the SUV just glides over the surface. It’s super quiet too. Even while going over a broken road, the suspension makes no sound and keeps the ambience of the cabin very calm. The only downside to this is that it takes a while to settle after the undulation. Whit this doesn't make the ride bouncy, it is noticed in the cabin. A bit more of rebound damping would have dialled in more sophistication into the ride.

The steering weighs up well as the speeds increase, but there is a disconnect from the wheels - like most luxury cars. Hence only in spirited driving will you be left wanting more feedback. Also, with a suspension focused on comfort, don't expect the GLC to handle like the C-Class.

But what is really surprising here is how it controls body roll despite the softer setup. Plus, you get the four-wheel drive to give you extra grip in corners. Hence even if there isn't much feeling though the wheels, you still have peace of mind. Overall, it does what it's built for - keep the occupants comfortable at all times.

The Mercedes-Benz GLC was always a very sweet SUV. What these updates do is keep it in contention with the competition. The BS6 diesel is easier to drive, the cosmetic updates make it looks better and the new infotainment add a lot of convenience to the cabin experience. Despite the few missing elements, the GLC feels like a very well rounded package that can easily be an everyday and go-anywhere car for the family. And at Rs 57.75 lakh for the GLC 220d diesel (ex-showroom, pan-India), you are only paying Rs 1.32 lakh more than the previous model, which more than justifies the updates. So if you are in the market for a comfort-oriented mid-size luxury SUV, you now have compelling reasons to say ‘Hey Mercedes’.