Published On May 18, 2012 By Ritesh for Toyota Land Cruiser Prado

Probably if there is an SUV which needs no introduction and automatically demands a lot of attention it has to be the Legendary Toyota Land Cruiser. This monster of an SUV hailing from the Land Of The Rising Sun, Japan has always enjoyed a big fan following across the world. 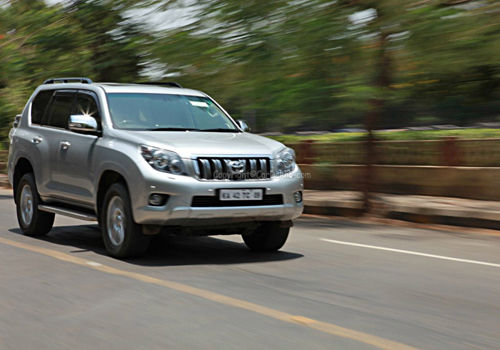 The Prado is also sold as the Lexus GX470 in the America. Toyota launched this latest generation Land Cruiser Prado Diesel in India some time back and we get behind the wheels of this huge SUV to see how good it really is.

Sold across the world for more than 50 years, the Land Cruiser has become a synonym with SUV. The current Prado is based on Toyotas J150 platform. The new Land Cruiser Prado looks much more appealing and now has a lot more muscular lines all around as compared to the earlier generation Prados.

The huge bonnet neatly mates with the swept-back Bi-xenon self-leveling headlamps, the headlamps also get a pair of washers just in case you get them in dirt while off roading. The bumper is also huge and has an “into the face” feel to it.

The front grill is totally different and has horizontally designed air intake slats with an all large chrome Toyota logo on it. The toothy grill gives a mean rough look to the face of this SUV. The front and rear wheel fenders are protruding, beefy and look very muscular.

The overall design reminds you of its elder brother Land Cruiser Amazon V8. The rear of the Prado sports all clear tail lamps and a twin opening boot, also a very chick looking rear spoiler which hides the rear wiper under it while the earlier Prado didn’t have this. The wide opening large door sort of welcomes you into the big SUV.

The front door glass is clear while the rear glasses and the boot door glass are in dark black tint. You get chrome covers for the large wing mirrors which also have integrated turn lights on them. Roof trails are standard and so is the large electric sun/moon roof.

The Toyota Prado drives on 18inche star shape alloys with tyre specs 265/60 R18 huge Tubeless Radials. The Toyota Prado stands tall and has a foot board to step on to and hop in. The tail lamps are in all clear white glass that gives a classy look to the Prado. The build quality and paint job on the Toyota Prado is flawless and feels very upmarket.

The interiors on the Toyota Prado are boasts of all beige theme, with leather seats that are fully electrically adjustable for height reach and back rest. The Prados dash reminds you again of the elder brother the mighty Land Cruiser Amazon V8.

Speedo uses the Optitron back-light glow while the centre dash houses the AC vents and an MID display which flashes a lot of information on the move and also acts as a display for the rear view camera while reversing.

Steering again reminds you of the Land Cruiser Amazon V8 and has the multi function buttons for cruise control, stereo, Bluetooth phone and to toggle between themed display settings. Electrical setting for height and reach for the steering is a big boon.

The Prado has a 3-zone climate control, with individual temperature setting for the front row passengers and one setting for the rear. Faux- Wood finish inserts neatly blend with the door panels and the centre console. Seats in the front are very supportive, lumber support available on the driver’s seat is again a boon for those long drives.

Centre row seats offer adequate thigh and back support and are on the firmer side. Adjustment for the back angle is available; also the centre row seats can be slided to the front or back as per the need. The most unique row on the Prado is the third row or the last row seats; the seats here electrically fold and unfold at the press of a button.

These as Toyota claims, are the world’s first flush-with-floor mechanism electrically operated seats, they fold in line with the floor level of the vehicle and become a part of the boot’s floor line and offer extra boot space when down. Seating on the third row is not as comfortable as the centre row but nevertheless two medium-built adults can fit in there.

A lining of thick carpet on the flooring further helps to make the cabin super silent. Door pockets and seat pockets are generously big but the icing on the cake is the centre arm cooler box which has an individual cooling fan which can store 4 water bottles and keep them chilled on a hot sunny afternoon.

Features such as Bluetooth connectivity, keyless entry and exit, six-CD changer, advanced all round parking sensors, reverse camera, seven airbags, leather seats, air suspension and cruise control are standard features in here. The driver seat position is perfect and the driver always gets a hawk-eye view of the road or off-road ahead.

The cabin of the Toyota Land Cruiser Prado is upmarket with a high level of equipment loaded on to it. Build quality and comfort level is high. The cabin area is large and space is abundant here.

Powered by the D-4D 3.0 litre Common Rail Direct Injection Turbocharged diesel engine that also currently serves the Fortuner but in a different state of tune and running on a very different ECU mapping and transmission, this D4D engine has 170bhp of power and generates a massive 410Nm of torque at as low as 1600rpm; remember the Prado weighs 2140kgs and the extra torque is a big boon to move the monster.

Button start the engine and the monster comes to life with a soft but meaty roar, shift to D mode on the auto stick and the Prado surges ahead as though a loaded locomotive. This engine is tuned for producing high torque which comes to good use for those off-road adventures. On the move the Prado feels very sturdy and stable, the speed builds up quickly but you don’t notice it until you spot the needle on the speedo hitting the speed digits.

The 5-speed auto transmission shifts intelligently, though, the 1st gear ratio is a tad bit long and we would have preferred a 6 or 7 speed transmission as on the rival SUVs in the segment. Once past the first gear, the Prado’s drive is pretty good and comfortable.

Suspension can be set in 2 modes i.e. sport and comfort. The Sport mode makes the suspension go stiffer while the setup softens up in the comfort mode. The Prado has the ability to cruise on the highways and the drive is as good as any luxury sedan while it is genetically bred to conquer the off road terrain and that’s just what we did.

It is on the off road that the Prado is built for.  As mentioned the view from the driver’s seat is very impressive and makes you feel invincible. The overall height of the vehicle helps matters too. The Prado comes in three settings for ride height control to raise or lower the vehicle, L is the lowest height, N is Normal and H is the high setting used for maximum ground clearance while off roading.

We took the Prado to its home ground for off roading. When off roading the full-time four-wheel-drive system gives it superb traction ability on the loose surface. When you drive faster on bad roads and rocky terrains the air suspension very nicely eats the bumps and gives a very smooth drive.

The Prado uses a ladder frame with a solid rear axle and this helps the vehicle very immensely while off roading. The air suspension and the ride height setting help the Prado to glide over rocks and hilly terrain very handsomely and with loads of confidence.

Coming back to the highways, the Prado behalves very maturely unlike other SUVs that tend to sway like boats on high sea at high speed. Aided by the electrically adjustable suspension setup that keeps matters well under control and even surprises you while cornering at high speeds as sharp as a sedan.

The feedback from the steering is adequate but a bit crisper feedback would be welcome. As we mentioned earlier the suspension has a sport and a comfort mode, which changes the ride quality to a noticeable extent. Overall a very impressive on road drive characteristics while off road is home territory for the Prado.

With a very trendy looking design and shape, imposing front end and a well defined rear, the new Prado no doubt is a massive looking SUV. It performs very well and lives up to the Legendry Land Cruiser name while off roading. It gets you noticed easily and gives a celebrity status instantly. Toyota has nicely blended form with function and added extreme practicality to the Prado’s package.  The driving pleasure and experience is excellent and makes you feel proud of it price tag of Rs 60.46Lakhs, Ex Mumbai. Loaded with goodies and gadgets, the new Prado should give the rivals a run for their money. If the Land Cruiser Amazon V8 is the self-proclaimed King of the SUVs then that makes the new Land Cruiser Prado the rightful Prince.