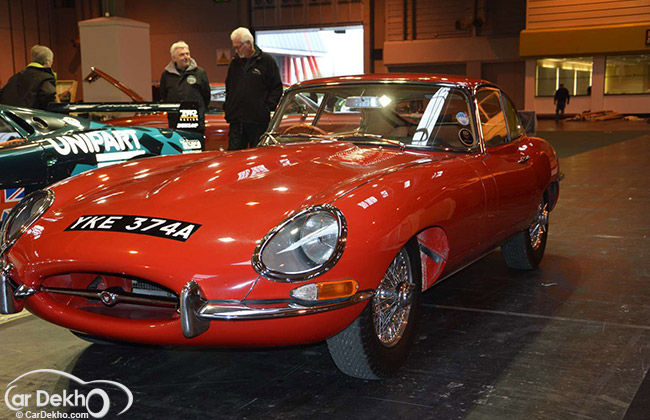 In the 1950 and the 60s, Britain was one of the largest car manufacturer in the world. Jaguar, Triumph, Rover, Mini ruled the streets of UK and other parts of the globe. Sports car was a true symbol of British design and engineering. One such sports car has been the Jaguar E-Type— a vehicle that has made to the history books as one of the most beautiful cars ever crafted.

The Jaguar E-Type was unveiled at the 1961 Geneva Motor Show. The tremendous response resulted that the Jaguar boss called up the factory to drive one more E-Type from Coventry to the motor show in Switzerland. Now, the E-Type has become an iconic vehicle. It was one of the shining jewels in the crown of British sports car heritage.

We drive this iconic British sports car in the city of the birth of most of the Jaguar cars— Coventry. The city of Coventry was one of the major hubs for the automotive industry in the 50s as companies like Triumph, Jaguar and even the London Taxi were formed there.

The Jaguar E-Type we drove was a 3.8-litre straight-six engine. I was worried if the E-Type required double de-clutching, but it didn’t. The power produced by the straight six is quiet brutal and would have definitely been quick for its times. No wonder, why this engine has won the Le Mans racing five times. It isn’t about the power ratings; the old-school engines were more about displacement and torque. Being an old-school guy, I love all this.

The E-Type is a living example of that. The thrust that the engine can produce could blow your head— despite being a 60s model.  The E-Type went faster than a Ferrari and at almost half the price. This did hurt the competition.

Driving on the M6, we couldn’t cross the speed limit of 70 miles per hour, and the craving to go faster was on the rise. We were cruising at about 70 mph in the top cog, and it was clearly evident that the engine had a lot of juice left in it.

The speedometer’s mechanical needle kept on flickering at the 70 mark and even the fourth gear, exhaust was sweet and not at all screaming. The E-Type is a comfortable cruiser too, as it was relaxed on the motorway. Plant your foot, and the monster will wake up and gush out an unstoppable power.

The gearshifts are precise, though it cannot be compared to the modern-day transmissions. Slot the knob into first, and you are good to go. There is some whining from the box in the first-gear, because it is a straight cut. However, it is quiet in the second, as the synchromesh gears got engaged.

The ride is nice and supple, while the handling is phenomenal. It can proudly scream out its racing pedigree, while the steering is direct and super responsive. It feels just like a go-kart, and it doesn’t come aided with any electronics like most of the modern sports cars.

The Jaguar E-Type design is worth a million dollars and the styling doesn’t feel old or out dated, even after completing fifty-years. We got more glances on the road, any maybe even a Bugatti Veyron or a Mclaren F1 would. We drove the original Series 1 Jaguar E-Type, which can be differentiated from the Series 2 with its open headlights with its glass cover. Its inducing design helped the Coventry based automaker sell over 70,000 units in a span of 15 years, which was astounding.

I always called the E-Type as the Envious-Type and it does make one envy for not owning one. Since, driving the E-Type has been such an experience, we are now waiting to get our hands on the F-Type that Jaguar claims to have one of the best driving dynamics. Read our preview of the Jaguar F-Type.