He may have been gripped by the word ‘intolerance’ lately but he is very tolerant when it comes to zooming around in some of the best muscular cars. The fourth richest Bollywood actor popularly known as Mr. Perfectionist, Aamir Khan is said to be choosy in all the facets. Whether it is about his choice of films or about his choice of rides he spots the superlatives. Felicitated with the dignitary awards of the nation for his impeccable work, the ace Khan is also fond of cars. Aamir is the recent entry in the list of the proud owners of rarely sighted Mercedes Benz S600 in India, beside the Business Tycoon Mukesh Ambani and the former Prime Minister Manmohan Singh. Let us check out the tally of cars in the garage of the Tom Hanks of India that creates a Dhoom on the roads. 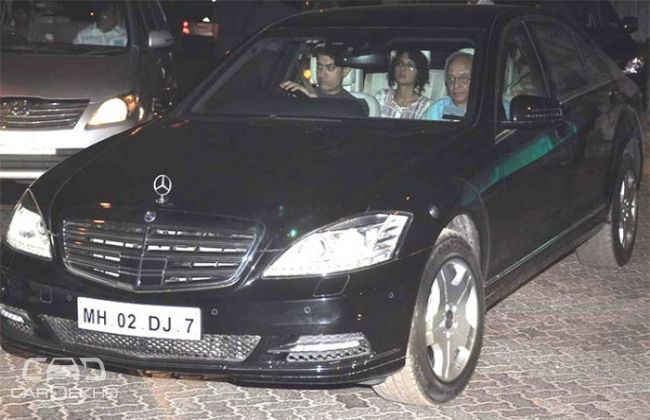 Aamir Khan has recently purchased a Mercedes Benz S600 which is believed to be a “special protection” car. The actor now enjoys the distinction of being the third one in the country and the first one in Bollywood to own this car which is the most expensive one. With the abounding layers of high level of armoured protection the car run on the Mercedes’ well-known 6.0-litre V12 engine that churns out a massive 545 bhp of power and 830 Nm of torque, mated to a seven-speed dual-clutch transmission box. This bullet proof car cost Aamir around Rs. 10 Crore.

Next in the list is the breath-taking and exquisitely designed luxury car by classic car maker - the Rolls Royce Ghost. Taking the authority on the road with its hefty build and ruling the speed chart with the aerodynamic sheath, Rolls Royce Ghost is an unquestionable pick at Rs. 3.1 Crore approximately. The car is planted with the most expensive 6.6-litre twin turbo V12 engines, capable of putting out a maximum power of 563bhp and a thumping 780Nm of torque with a displacement capacity of 6592cc. Great taste Mr. Khan!!

Along with the Rolls-Royce Ghost Aamir owns an SUV from Toyota. Matching the masculine style of the actor in many recent releases, Toyota Fortuner is a power pack with a 3.0-litre, D-4D engine that can unleash a max power of 168.6bhp in combination with a peak torque of 360Nm, which is quite good. The car costed Aamir around Rs. 23.0 lac.

Another purest pick by Aamir Khan that perfectly suits the star is the Bentley Continental. Check out the awesome number on the plate - 0007. This elegant road machine can reach the top speed of 300Kmph with a powerful V8 engine. Costing around Rs. 2.25 Crore to the star, the ride is the sheer specimen of comfort and convenience for him.

Mr. Perfectionist has not spared any top car brand to cater his lobby. The foremost luxury car brand from Germany, BMW’s 6 Series is the another blockbuster possession of this blockbuster actor that costed him around Rs. 1.2 Crore. This astounding vehicle reaches 100Kmph in just 5.4 seconds all thanks to the 3.0-litre, 6 cylinder diesel engine. With the lavishing interior and superior driving experience, this vehicle has got everything that goes all the way with the style of the star.

Another Sport Utility Vehicle in Aamir’s stable is the Land Rover Range Rover. This luxury SUV seems sophisticated from inside but stuns you with its amazing off-roading capability. With a 5-litre supercharged diesel engine that produces a massive power of 502.8bhp and peak torque of 625Nm, Aamir would have enjoyed the late night drives at Marine Drive.